OUT OF MIND » PLANET AWARENESS » ATMOSPHERIC CHANGES » The Electric Sun: The United States Bakes Under A Heatwave - July 1, 2013

The Electric Sun: The United States Bakes Under A Heatwave - July 1, 2013 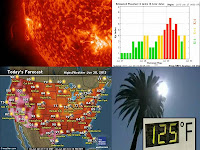 The most important issue separating the Electric Universe from conventional views is that evidence based in laboratory experiments can be used to support EU theories of cosmogony and cosmology. The mainstream sinks its foundations in ground where computer models and complex equations are used for support. It is this philosophical divergence that inhibits the general acceptance of plasma and electricity as active agents in space

The Sun may be powered, not from within itself, but from outside, by the electric (Birkeland ) currents that flow in our arm of our galaxy as they do in all galaxies. This possibility - that the Sun may be externally powered by its galactic environment - is the most speculative idea in the ES hypothesis and is always attacked by critics while they ignore all the other more obvious properties of the ES model.

In the Plasma Universe model, cosmic sized, low-density currents create the galaxies and the stars within those galaxies by the electromagnetic z-pinch effect. It is only a small extrapolation to ask whether these currents remain in place to power those stars. Galactic currents are of low current density, but, because the sizes of the stars are large, the total current (Amperage) is high. An Electric Sun's radiated power is due to the energy delivered by that amperage. As it travels around the galactic center the Sun may come into regions of higher or lower current density and so its output may vary both periodically and randomly. 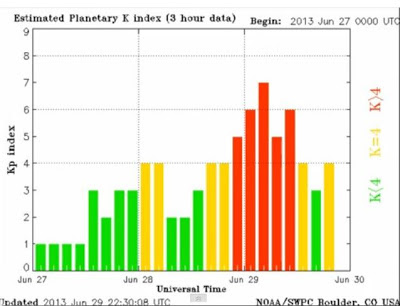 As a result of this geomagnetic K7, California was hit by a heat wave from June 28 to June 30, 2013 causing record temperatures.

Highs in Las Vegas reached 115F (46C) on Saturday, the fourth-hotted temperature ever recorded in the city.

In Death Valley, California, an unofficial thermometer recorded a reading of 130F (54C) degrees - just short of the 134F (56C)degree reading from a century ago that stands as the highest temperature ever recorded on Earth.

Solar activity will continue to increase as the solar cycle progresses toward solar maximum, expected in the 2013 time frame.

NASA is predicting that the Sun may generate unprecedented solar storms for a lengthy period in 2013.

OUT OF MIND » PLANET AWARENESS » ATMOSPHERIC CHANGES » The Electric Sun: The United States Bakes Under A Heatwave - July 1, 2013