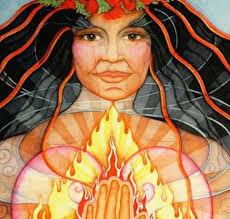 "So there I was, with the  Ho'oponopono, looking it straight in the eye.  And it looked back, with all of the implied compassion of and obeisance and surrender to the Great Teacher.  Could I do this, could I really feel these words in Truth?"

Today I had a sublime experience using the mantra, HO'PONOPONO.  I had come across the word  recently when reading Scott Mowry's latest article, posted here .  I'd seen the word in the past, and I have seen the definition separately, but hadn't put the two together until now.  That is all I knew, that was as deep as it went for me.  Which was perfect - I hadn't examined, contemplated or exploited it.  It was a virgin mantra.

But yesterday a situation erupted with someone who I consider a good friend.  We had 'words', (or more accurately, text messages) and I became really angry.  Angry like I haven't been in about five years.  Angry like if  I didn't calm down, I was going to pass out, overcome by dizziness.  And what made it worse in my view was that it was done via text messaging!!  OMG, I was regressing into a teenager!!  The whole scenario had all the earmarks of a juvenile spat, with yours truly as one of the players.

A while back, I stopped doing angry.  Anger is a killer, literally.  All kinds of mean and nasty chemicals are released into the blood stream when we become angry - hormones are thrown off balance, our bodies become acidic and our heart-rate and breathing increase abnormally as a response to our inherent 'flight or fight' programming.  And anger always involves a fabricated self-righteous perception that keeps it justified, something that our ego loves - it thrives on that shit.

And then of course there is the feeling-really-bad about whatever happened.  Followed by figuring out how you are going to make it right again.  All that pontificating just brings back the incident in your mind, and you end up playing it over and over again.  And the more you do that, the more you feed the ego which wants so dearly to cling to any notion we may be holding of having to be right.  It's exhausting.

When I was studying the Yoga system of Swami Shivananda, one of the things he was very keen on was never becoming angry.  He wrote that one outburst of anger creates such disharmony to the astral body that it takes 40 days to repair and replenish it.   That always stuck with me.  Because if you are dedicating you life to Yoga and meditation, it simply isn't worth it.  It wasn't worth destroying weeks, months or even years working diligently toward a balanced life just to have it thrown off by a hissy fit.  Or any other (and there are many) forms that anger takes.

So there I was yesterday - Me and My Anger.  I sat with it until I used what I had in me to raise my vibration, call in my guides and get to work.  By that I mean, let it go - go to that place where I visit when I meditate and latch the mind onto that space of infinite peace.  Within a short while, I was much better.  And I continued to feel better as the evening wore on.  But I still had the issue of the other person.  (Oh yeah, that.)  To keep myself in balance, I listened to Bentinho Massaro on YouTube.  A little sidebar here:  The really interesting thing was that the particular topic he was discussing was something that I absolutely had to hear, and unrelated to the topic at hand.  To my amazement, the person in the video who asks the question has the exact same issue as me, and he expressed it much like I would.  And as if that were not coincidence enough, he wants to go to Hawaii.  SO DO I!!!  NOTE TO THE UNIVERSE:  Thanks for synchronicity, I love when You do that!

Back to Ho'oponopono.  When I woke up today I asked my quides and St. Germaine, and Lord Krishna and Divine Mother (and ultimately my Higher Self) to fix the issue.  I handed it over and did my morning Sadhana.  (Afternoon Sadhana these days - I sleep late.)  All the while I was doing my meditation and other offerings, the Ho'oponopono mantra kept coming through.  Or more accurately, the meaning of the mantra kept coming through:

I love you.
I'm sorry.
Forgive me.
Thank you. 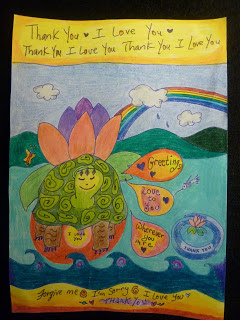 That's all.  That's it.  Simple, sweet, to the point, and all is well.   With such a mantra, the ego is lost.  The ego is stunned, it is flailing about in shock that it has been dismissed.  And the beauty part of it is, there is no muss or fuss.  It's like passive resistance - refuse to push back and soon the aggressor has nothing to overtake.  So there I was, with the  Ho'oponopono, looking it straight in the eye.  And it looked back, with all of the implied compassion of and obeisance and surrender to the Great Teacher.  Could I do this, could I really feel these words in Truth?

It turns out that I didn't have to wait for an answer; the very thought of Ho'oponopono and it's meaning proved to be enough.  With no preplanned agenda, the person with whom angry words were exchanged and I met to talk, and I didn't even have to think twice.  I said I am sorry and we hugged.  We spoke briefly about what happened and mutually decided that it was so ridiculous, etc., etc.  And that person in turn said sorry.  Let's move on.  End of drama.

But what I am not sorry for is the opportunity that this incident offered me to look that much more closely at MY SELF and see what kinds of yucky yuk is still lingering.  The energies coming in are causing all kinds of ages-old issues to erupt.  But the same energies are assisting us with the clearing, transmuting really, the old baggage more quickly and less painfully.  Much of what Bentinho Massaro talks about in the video is the idea of how we create situations so that we might be able to experience the very thing for what it is, or to change and grow and to ultimately transcend.   So I, or we, created a situation which enabled the experience that, in turn, supports us and our growth.

So negativity isn't always negative.  And so it holds that positivity may not always be positive.  It's what our minds assign to that situation, or object or emotion.  We are immersed in duality so that we can overcome it.  These past 24 hours has been an encapsulated examination and ultimate understanding of this otherwise very difficult concept.  So I guess, yes, the video was related to what happened after all.  Ask and you get.   Know what I am asking for now?  A pineapple.  I have a sudden craving.

With Love in Oneness,
Sharda