by Freeman
Why is Miley’s performance important to our nation? Simply stated, Global Mind Control. Our celebrities are used as symbols to rally the forces of war. Kali, consort of Shiva, symbolizes the “Time of Death”; The Black One. Once Kali had destroyed all the demons in battle, she began a terrific dance out of the sheer joy of victory. The unleashed form of Kali often becomes wild and uncontrollable. Kali was so much involved in the killing spree that she got carried away and began destroying everything in sight. Kali is the fearful and ferocious form of the mother goddess.
Psychological warfare is the subtle undertone that guides a population to war. Some say there are much more important things to discuss other than Miley Cyrus’ performance at the MTV Music Awards. The simple answer is that this is wartime propaganda and Disney has been at the heart of it since WWII. 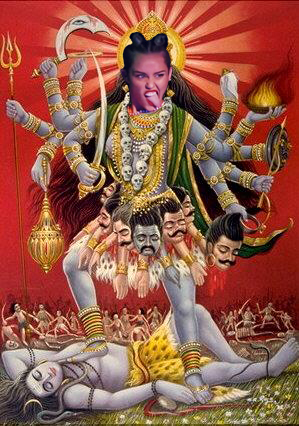 They brought Miley out of a trailer park and onto the stripper pole singing “Party in the USA” as the U.S. economy collapsed. Again, Miley was dredged up to play a role in the Occupy Movement . Now, it is the blatant destruction of the United States’ image. The rest of the world must see us as The Great Satan. This is the reason for Honey Boo Boo, Sex in the City, or Pawn Stars; to make America look like the lowest form of life on the planet. Beyond this is the Truther programming that leads one to destroy their own nation from within. Do you think THEY do not want you spreading hate for America’s leadership. It’s in the plan! Globalists have no love of nations. Disney showed us this little tid bit of mind control in Chicken Little. The Fox uses Chicken Little to spread fear and animosity amongst the chickens all the while he thinks he is doing the right thing. (Spoiler Alert) It does not go well for the chickens.
There is more to this. The psychological effect that this display of debauchery has on young minds. We have all grown up institutionalized and mind controlled. Our celebrities simply reinforce the meta-programming and without them, this whole scenario falls apart.
On December 7, 1941 Japanese planes attacked Pearl Harbor. Within twenty four hours war had been declared and approved by Congress and the United States officially entered WWII. The next day Walt Disney arrived to work at the studio in Burbank only to be stopped at a check point and made to confirm his identity. The entire studio had been commandeered by the military. 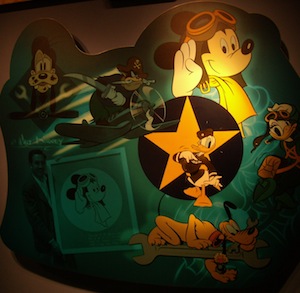 When the studio occupation ended Walt chose to stick with the military theme in his project “Victory Through Air Power”. It ended with a triumphant obliteration of Tokyo. The cartoon reduced war to machines fighting machines leaves out the suffering and dying…one critic of the time called it a “gay dream of holocaust”. Winston Churchill liked it so much he requested a private screening for himself and Franklin Roosevelt to help convince the president to go ahead with a long range bombing program.
Inspired by Disney’s “Education for Death: The Making of the Nazi” , Hitler was enjoying his own finely tuned mechanism of mind control. His propaganda minister Joseph Goebbels admired the quality of Walt Disney’s animation so much he was inspired to use the same medium to create propaganda of his own. 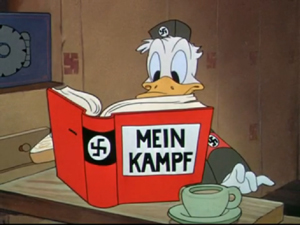 Walt Disney has stated that he always saw Donald Duck as the common man, yet, he portrays Donald as one who is irrational, ill-tempered, impulsive, of low intelligence and is easily manipulated. In the 1942 cartoon entitled “The New Spirit” Donald is implored by a radio to help stamp tyranny from the earth by paying his income taxes, imparting to him the motto “Taxes to beat the axis.” When Donald rushes his payment to Washington DC we discover exactly where our tax revenues go…to factories working day and night to produce “guns, machine guns, anti-tank guns, long range guns, guns, Guns all kinds of GUNS!”
Why would the government need Donald Duck to remind people to pay their taxes? Perhaps because in 1942 Americans were just getting used to the idea of federal income tax. Few people know that prior to 1913 federal income tax was considered unconstitutional.
MORE>>
+++
[Hat tip: Barb-tx.]
ZenGardner.com
- See more at: http://www.zengardner.com/why-miley-cyrus-performance-at-vma-is-important-global-mind-control/#sthash.jHArxBL9.dpuf