The Science of Ascension -- Positrons Have Arrived to Transform Our Reality

The Science of Ascension -- Positrons Have Arrived to Transform Our Reality 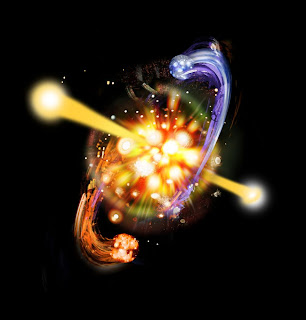 The Science of Ascension -- Positrons Have Arrived to Transform Our Reality
September 9, 2013
http://cosmicdolphinmagic.ning.com/

I'm no science whiz, but I found this article super interesting. Thanks for sharing Jewell ~BK


When I discovered at spaceweather.com that scientists are seeing the Sun ejecting POSITRONS now, I started jumping up and down and screaming with joy. This is what the entire world would be doing right now if they knew what this means.

The teachings that were brought to Earth over the past fifteen years by Guardian Races taught us that the universal reality that we have been living in is based on has been the reverse spin technology of locking us into this density. We have been INVOLUTING or coming down into density. We were taught that when we begin our EVOLUTION and ASCENSION out of this time locked prison, there would be the electrons finally disappearing and being replaced with positrons.

If we did not have the massive influence of the teachings of the Quantum Physics brought to Earth by those who have been living in this Cosmic Reality for millions of years, our scientists would had never had the glimpse of this reality which has prepared them for realizing that there actually is such a thing as a positron.

I learned about the positron from Ramtha in the Legacy Teachings DVD's. Ramtha is a Lemurian from 35,000 years ago who works with Mu in Inner Earth and has been teaching the Quantum Realities that we are about to encounter since the 70's. Ashayana Deane has also been teaching this science for about ten years, and she was also communicating with Mu.

It is very obvious that in order for the Earth to turn into Inner Earth where Mu and our other Guardian Races are waiting for us, we must go throught this transition from particle to anti particle shifting. We do not go to Inner Earth by walking down some stairway. The idea of walking up the stairway to heaven into the Cloud Cities is a metaphor for us actually becoming less and less dense until the Cloud Cities and Inner Earth and Earth all become the same place in our new Reality.

I googled positron http://en.wikipedia.org/wiki/Positron and learned that scientists have been baffled about this idea of the positron since the 30's.There were three scientists that studied its existence. The conclusions indicated that if there were a positron it would disolve the hydrogen and the electron. Well that matches exactly what is required for us to return to the reality of H202HE3. The hydrogen must turn into helium, and the electon must turn into the positron.

Nambu discovered that positrons show a change in direction from past to future. That is the definition of EVOLUTION. We are finally moving from the past to the future. We are moving into a new future of grand possibilities. Dmitri Skobeltsyn has shown us that positrons curved in the opposite direction, again showing that we have finally turned around and we are ascending back into the Vast Field of Possibilities of our Cosmos.

This new realization of the POSITRON is much more accurated on the Higher Levels of Understanding than the protons and phonons being the elements of our transposition. The Positron shows that original spiritual divine essence of our Universe is finally being returned to us. This is the beginning of our merging more and more into the antimatter- the quantum spiritual invisible substance of our creation.

The more we are given some actual visible realities of these divine sciences, the more our consciousness will accept that it is happening, and that will trigger a mass consciousness of belieiving.

Dmitri Skobeltsyn first observed the positron in 1929.[9][10] While using a Wilson cloud chamber[11] to try to detect gamma radiation in cosmic rays, Skobeltsyn detected particles that acted like electrons but curved in the opposite direction in an applied magnetic field ]http://en.wikipedia.org/wiki/Positron

Carl D. Anderson discovered the positron on August 2, 1932,[13] for which he won the Nobel Prize for Physics in 1936.[14] Anderson also coined the term positron. The positron was the first evidence of antimatter and was discovered when Anderson allowed cosmic rays to pass through a cloud chamber and a lead plate. A magnet surrounded this apparatus, causing particles to bend in different directions based on their electric charge. The ion trail left by each positron appeared on the photographic plate with a curvature matching the mass-to-charge ratio of an electron, but in a direction that showed its charge was positive ]http://en.wikipedia.org/wiki/Positron

This is the same anti-particle formula that we use when we walk into the mirror to translate our bodies into anti-particle, etheric spiritual blue bodies.

When we walk into the candle or into a mirror, we are walking into the full spectrum of light or the entire rainbow prism. We actually disappear into the rainbow prism and then reappear as a blue body.

The rainbow prism is coming from intense electrical field like a MAGNETIC MIRROR which is a device used in thermo nuclear processes that is the mirror.

That nuclear process is actually contained within the intense dark field within the mirror.

That same mirror effect exists within the brain. We are supposed to be able to walk all the way through the mirror and see ourselves on the other side.

By practicing this walk through the mirror we are adjusting our brains. We are reversing the way our mind works. We are training our minds to see the other side of reality--the quantum field that we think of as invisible. But it is not invisible. We have just had our brains turned off so that we can't see the rest of reality.

We have forgotten how to manifest the reality that we desire through our mid brain.
We are preparing for our grand manifesting by practicing with the mirror.

By using the mirror, we can learn to FEEL the anti-matter substance that is within it. We can feel how it makes our bodies translate. We can perceive how it allows us to see into a reality that we didn't know was there.

We can actually come face to face with anti matter.

OUR MANIFESTATIONS become Manifest in the Hertizian because that is what tangible reality is to us in this world.

We must train the brain to facilitate antimatter. This is how we learn to see our parallel spiritual reality. This is what allows us to enter into the fifth dimension of Tara.

We have a big gap missing from reality because our mid brain hasn't been used correctly in our life time.

The mirror give us back the part of the mid brain that we are missing.
We are learning how to reverse our DNA into the subharmonics that create the 12 DNA reality.

Working with the anti particle spiritual reality allows us to bring all of those forms into tangible realities in the hertzian visible manifest realm.

By walking into the mirror we turn on the extraordinary window in the brain that is the infra red psychic brain.

This is how the infinite unknown holograms become the known manifest realities that we see with our anti matter mid brain in the back of the head. We can't begin to know the holograms that exist as Tara or Inner Earth until we have trained our mid brain to hold the vision that is presenting itself in anti matter.

This thermo nuclear processes that we go through when we walk into the mirror is described perfectly here as the same thing that goes on in the Sun's interior.

The funny thing that we will all become aware of in just a few more years, is the fact that we actually live inside of the sun's interior.
The Sun's Interior: Core

The core starts from the center and extends outward to encompass 25 percent of the sun's radius. Its temperature is greater than 15 million degrees Kelvin [source: Montana]. At the core, gravity pulls all of the mass inward and creates an intense pressure. The pressure is high enough to force atoms of hydrogen to come together in nuclear fusion reactions -- something we try to emulate here on Earth. Two atoms of hydrogen are combined to create helium-4 and energy in several steps:

These reactions account for 85 percent of the sun's energy. The remaining 15 percent comes from the following reactions:

The helium-4 atoms are less massive than the two hydrogen atoms that started the process, so the difference in mass is converted to energy as described by Einstein's theory of relativity (E=mc²). The energy is emitted in various forms of light: ultraviolet light, X-rays, visible light, infrared, microwaves and radio waves.

The sun also emits energized particles (neutrinos, protons) that make up the solar wind. This energy strikes Earth, where it warms the planet, drives our weather and provides energy for life. We aren't harmed by most of the radiation or solar wind because the Earth's atmosphere protects us.