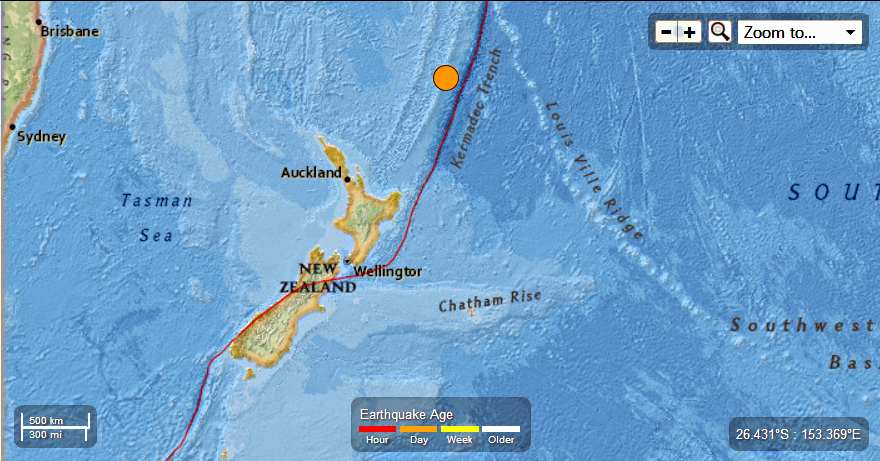 …
Tectonic Summary
Seismotectonics of the Eastern Margin of the Australia Plate
The eastern margin of the Australia plate is one of the most sesimically active areas of the world due to high rates of convergence between the Australia and Pacific plates. In the region of New Zealand, the 3000 km long Australia-Pacific plate boundary extends from south of Macquarie Island to the southern Kermadec Island chain. It includes an oceanic transform (the Macquarie Ridge), two oppositely verging subduction zones (Puysegur and Hikurangi), and a transpressive continental transform, the Alpine Fault through South Island, New Zealand.
Since 1900 there have been 15 M7.5+ earthquakes recorded near New Zealand. Nine of these, and the four largest, occurred along or near the Macquarie Ridge, including the 1989 M8.2 event on the ridge itself, and the 2004 M8.1 event 200 km to the west of the plate boundary, reflecting intraplate deformation. The largest recorded earthquake in New Zealand itself was the 1931 M7.8 Hawke’s Bay earthquake, which killed 256 people. The last M7.5+ earthquake along the Alpine Fault was 170 years ago; studies of the faults’ strain accumulation suggest that similar events are likely to occur again.
North of New Zealand, the Australia-Pacific boundary stretches east of Tonga and Fiji to 250 km south of Samoa. For 2,200 km the trench is approximately linear, and includes two segments where old (>120 Myr) Pacific oceanic lithosphere rapidly subducts westward (Kermadec and Tonga). At the northern end of the Tonga trench, the boundary curves sharply westward and changes along a 700 km-long segment from trench-normal subduction, to oblique subduction, to a left lateral transform-like structure.
Australia-Pacific convergence rates increase northward from 60 mm/yr at the southern Kermadec trench to 90 mm/yr at the northern Tonga trench; however, significant back arc extension (or equivalently, slab rollback) causes the consumption rate of subducting Pacific lithosphere to be much faster. The spreading rate in the Havre trough, west of the Kermadec trench, increases northward from 8 to 20 mm/yr. The southern tip of this spreading center is propagating into the North Island of New Zealand, rifting it apart. In the southern Lau Basin, west of the Tonga trench, the spreading rate increases northward from 60 to 90 mm/yr, and in the northern Lau Basin, multiple spreading centers result in an extension rate as high as 160 mm/yr. The overall subduction velocity of the Pacific plate is the vector sum of Australia-Pacific velocity and back arc spreading velocity: thus it increases northward along the Kermadec trench from 70 to 100 mm/yr, and along the Tonga trench from 150 to 240 mm/yr.
The Kermadec-Tonga subduction zone generates many large earthquakes on the interface between the descending Pacific and overriding Australia plates, within the two plates themselves and, less frequently, near the outer rise of the Pacific plate east of the trench. Since 1900, 40 M7.5+ earthquakes have been recorded, mostly north of 30°S. However, it is unclear whether any of the few historic M8+ events that have occurred close to the plate boundary were underthrusting events on the plate interface, or were intraplate earthquakes. On September 29, 2009, one of the largest normal fault (outer rise) earthquakes ever recorded (M8.1) occurred south of Samoa, 40 km east of the Tonga trench, generating a tsunami that killed at least 180 people.
Across the North Fiji Basin and to the west of the Vanuatu Islands, the Australia plate again subducts eastwards beneath the Pacific, at the North New Hebrides trench. At the southern end of this trench, east of the Loyalty Islands, the plate boundary curves east into an oceanic transform-like structure analogous to the one north of Tonga.
Australia-Pacific convergence rates increase northward from 80 to 90 mm/yr along the North New Hebrides trench, but the Australia plate consumption rate is increased by extension in the back arc and in the North Fiji Basin. Back arc spreading occurs at a rate of 50 mm/yr along most of the subduction zone, except near ~15°S, where the D’Entrecasteaux ridge intersects the trench and causes localized compression of 50 mm/yr in the back arc. Therefore, the Australia plate subduction velocity ranges from 120 mm/yr at the southern end of the North New Hebrides trench, to 40 mm/yr at the D’Entrecasteaux ridge-trench intersection, to 170 mm/yr at the northern end of the trench.
Large earthquakes are common along the North New Hebrides trench and have mechanisms associated with subduction tectonics, though occasional strike slip earthquakes occur near the subduction of the D’Entrecasteaux ridge. Within the subduction zone 34 M7.5+ earthquakes have been recorded since 1900. On October 7, 2009, a large interplate thrust fault earthquake (M7.6) in the northern North New Hebrides subduction zone was followed 15 minutes later by an even larger interplate event (M7.8) 60 km to the north. It is likely that the first event triggered the second of the so-called earthquake “doublet”.
More information on regional seismicity and tectonics
…
[url=https://s1254.photobucket.com/user/Desertrosecreations/media/Earth Changes/Tsunami Advisory/NewZealand-67magEQ9302013_zpsb083ec20.jpg.html] 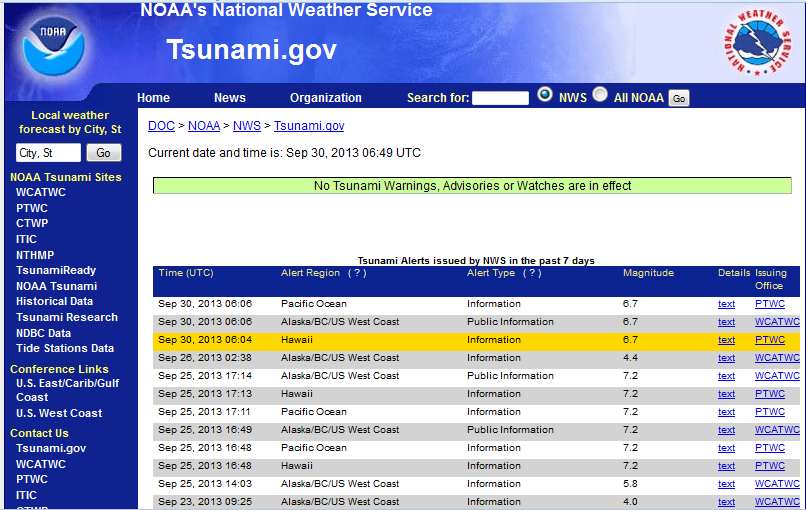