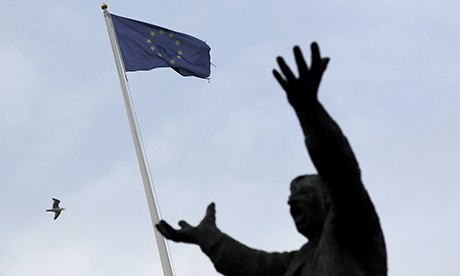 The European Union flag behind the statue of Irish trade union leader James Larkin in Dublin. Photograph: Peter Muhly/AFP/Getty Images
Three years after being saved from bankruptcy by a trio of international lenders with a €67.5bn loan, Ireland has become the first stricken eurozone state to exit its rescue programme.
Describing the crisis as the country's worst period since the potato famine, Ireland's finance minister said there must be no repeat of the debt-fuelled property spree that brought the Celtic Tiger boom to a disastrous end. "We can't go mad again," said Michael Noonan.
Ireland's announcement that it will not seek more funds from the International Monetary Fund, European commission and European Central Bank - with the rescue scheme to end formally on Sunday - was seized upon by the EC president, José Manuel Barroso, as evidence that the eurozone can stage a full recovery.
"Ireland's success sends an important message - that with determination and support from partner countries we can and will emerge stronger from this deep crisis," he said.
Greece, Cyprus and Portugal are still working through rescue programmes, which include external scrutiny of government budgets, while Spain has received funds to recapitalise its banks. Ireland's bailout - which came after the state guaranteeed the investments of depositors and bondholders in its stricken banks - was comprised of €22.5bn from each of the co-called "troika" members over three years, topped up to a total of €85bn with the country's cash reserves.
Having implemented the spending cuts, asset sales and reforms required under the bailout, Ireland has been embraced again by the debt markets that shut out the country at the turn of the decade. It has raised enough debt independently to fund itself into 2015 and has more than €20bn (£17bn) in the bank.
However relief that Ireland will officially exit the rescue programme on Sunday was tempered with warnings from Irish ministers that the policy of austerity must continue, in order to drive down the country's mountain of debt. Noonan said: "This isn't the end of the road. This is a very significant milestone on the road.
In its final report on Ireland's progress under the rescue scheme, published on Friday, the European commission said : "With public debt level at 124% of GDP in 2013, Ireland needs to continue with fiscal consolidation, reduce the private-sector debt overhang, and improve bank profitability to revive lending."
Cabinet ministers also lined up on Friday to praise the Irish people for stoically accepting three years of deep cuts to social welfare, state jobs and public sector wages as part of a programme of 270 separate reductions in state budgets.
Noonan suggested the crisis that pushed Ireland to the edge of financial disaster was the worst since the famine of the mid-19th century in which millions died or emigrated as potato blight wiped out Ireland's staple crop.
Asked how the exit from the bailout would impact on domestic demand – one of the weakest sectors in the Irish economy – Noonan's ministerial colleague Brendan Howlin interjected at the press conference in the Government Buildings: "Try booking a restaurant in Dublin tonight."
The minister who has had to deal most with IMF-EU officials over the last four years, Noonan, said they sometimes failed to appreciate the political pressures the Irish coalition was under.
"Most of the people who were involved in the background of the troika were very smart, very competent technocratic people but they weren't very good at politics," Noonan said.
Ireland surprised many observers last month by announcing that it would not apply for a precautionary credit line from the IMF - which could have allowed it access to the ECB's emergency rescue scheme in the event of a future crisis. Instead, the government was determined to show that it can stand on its own two feet.
On Europe 's prospects as a whole, Noonan said: "The phase of additional European countries going into [bailout] programmes, and the countries in programmes having concerns over their situation, is over. The eurozone is quite strong again."
Noonan added: "The real heroes and heroines are the Irish people."
Earlier the employment minister, Richard Bruton, praised the way the Irish accepted their newly straitened circumstances without taking to the streets, as in Greece and Portugal, describing the "patriotism in the way people approached this crisis".
Among the ordinary citizens portrayed as the true heroes of the last three years there was a mixture of resignation and wariness over what the exit would mean for them.
Michael McMorrow, a self-employed Dubliner, said: "It does appear that there are small signs of improvement – unemployment going down a little, property market starting to move a little, dormant shop units waking up a little, the tide of new charity shops in Dún Laoghaire [a seaside town in the south Dublin suburbs] slowing down a little.
"I'd love to believe that leaving the bailout is genuinely a step into the light, and maybe it is, but I'm too scarred to raise my hopes just yet."
But Martin Shannon, a 31-year-old bookseller from south Dublin, said he had already noticed an upturn in consumer demand even before the country left the bailout.
"We'll be in control of our finances more than we have been for the last few years, but I'm indifferent as to whether that's actually a good thing. Wasn't it ourselves who dug the hole in the first place? Or at least allowed the hole to be dug on our land.
"Working in a bookshop, I'm used to having a grim outlook. Paying tax, and with more taxes and charges looming in the new year, it's hard to get excited about this. However, there is one thing that gives me a bit of hope, and indicates to me that things might be getting better. I've noticed that our turnover in the bookshop is up around 10% on this time last year. Customers seem more relaxed and are spending a little more easily, pointedly mentioning the price of books a little less frequently," Shannon said.