Is human urine the key to better farming? 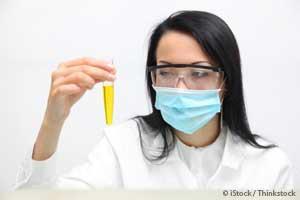 The Rich Earth Institute (REI) in Battleboro, Vt., is investigating whether human urine can replace chemical fertilizers.
We first learned of the technique over at Modern Farmer. The project, which has enlisted well over 100 volunteers to donate their urine, aims to determine if “essential plant nutrients” found in urine, such as nitrogen, phosphorus and potassium, will work as a kind of all-natural fertilizer.
It’s not as unusual as you might think. Modern Farmer explains that, “Across the Atlantic, studies have long established urine as a powerful fertilizer.”
The article goes on to cite a study done by the Stockholm Water Company.
Via Modern Farmer:
A study conducted by the Stockholm Water Company in the late 1990s diverted urine from four housing projects to a grain farmer outside the city. The scientists concluded not only that urine could replace quick-acting mineral fertilizers, but also calculated that one Northern European adult pees enough plant nutrients to grow 50 to 100 percent of the food requirement for another person. Other successful trials have taken place in China and Mexico, though none as detailed as the Swedish one.
National Geographic spoke with researcher Debendra Shrestha of Tribhuvan University in Kathmandu, Nepal, who said that Nepalese farmers have been using human urine on crops for centuries.
But does it work? According to National Geographic, it did for Shrestha. After conducting an experiment that featured sweet peppers grown in soil with different combinations of urine, compost, and urea ― “the main nitrogen-containing chemical in human urine” ― the researchers found that plants grown in soil that “had a combination of human urine and compost grew the tallest, yielded the most peppers, and had the most total fruit weight per plant.”
That study’s results were published in Scientia Horticulturae.
Another study investigated the effect that urine and ash had on growing beets. The researchers found that “urine with or without ash can increase the yield of red beet and furthermore the microbial quality and chemical quality were similar to the situation in mineral-fertilized products.”
Yet another study that focused on tomatoes found similar results.
Still, there are questions. As Modern Farmer notes, traces of pharmaceuticals that can show up in urine are also being studied by REI, with the help of two universities.
via Project probes whether human urine is the key to better farming | The Sideshow – Yahoo News .

Posts : 306
Join date : 2014-02-12
Location : Croatia
There sure is, but I piss in my garden all the time. LOL. I have a small bucket and sometimes when I can't make it to the bathroom will urinate and then dilute it. Because I do plant in different beds, I can compare. For example, I plant spinach in 3 or 4 beds and experiment to see what they like the best. I finally figured out how to access my FB photos, here a few photos of my garden. I use a mix of square foot and permaculture, the beds on the bottom are filled with wood, woodchips, compost and then soil...it lasts a couple of years I don't need to fertilize and just add to the top.

NanneeRose wrote:There's a whole world or urine floating around here isn't there LOL!

LOL you all know where i am on pee!! :athuup:

Drink your pee
and you will see
nothing ails thee
hehehe

Admin
Posts : 90518
Join date : 2012-01-04
Location : Woodstock Nation
Your garden is awesome CL! If you are still having trouble loading pics email them to me and I will see what I can do to load them for you.

My grandson id potty training at present maybe I will try this an experiment with my containers also.