A Malaysian airliner reportedly with 295 people on board has crashed in Ukraine near the Russian border, on a flight from Amsterdam to Kuala Lumpur.
Malaysia Airlines said it had lost contact with Flight MH17 from Amsterdam. The last known position was over Ukraine, it said in a tweet .
An aviation source in Moscow told Reuters the plane had been found burning on the ground in east Ukraine.
Separatist rebels have been fighting government forces in the region.

Analysis: Jonathan Beale, BBC News
A defence expert has told the BBC that shooting down a plane at 10,000m (9.7 miles) would have required a long- range surface-to-air missile - possibly guided by radar.
That suggests it is unlikely it could have been downed by a portable air defence missile, or Manpad, which has a much shorter range.
The only other possibility is for an aircraft at that height to be downed by a fighter carrying air-to-air missiles.
The US will have access to satellite imagery that should be able to identify ultra-violet plumes if a long-range surface-to-air missile was fired.

A number of Ukrainian military planes have been shot down by missiles in recent weeks. Ukraine has accused Russia's military of supplying advanced missiles to the rebels.
Earlier on Thursday, Ukrainian officials blamed the Russian air force for shooting down one of its ground attack jets on Wednesday. 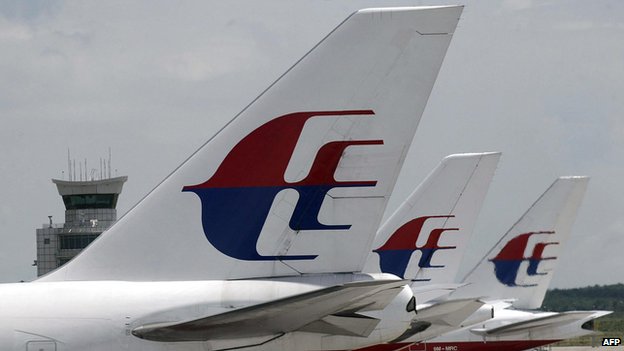 Malaysia Airlines in Kuala Lumpur said it had lost contact with the plane
Anton Herashchenko, an adviser to Ukraine's interior minister, was quoted by the Associated Press as saying the plane had been hit by a missile at an altitude of 10,000m (33,000ft). The claim could not be verified independently.
The source which spoke to Reuters about burning wreckage on the ground said the plane had failed to enter Russian airspace.
The UK Foreign Office said it was aware of the reports of the crash and was "urgently working to establish what has happened".
Are you nearby? Do you have any information you can share with us? Please email haveyoursay@bbc.co.uk using the title 'MH17 crash' in the subject heading.
Send your pictures and videos to yourpics@bbc.co.uk or text them to 61124 (UK) or +44 7624 800 100 (International). If you have a large file you can upload here .
Read the terms and conditions

Posts : 1343
Join date : 2014-01-03
Location : England
BBC reporting this as a crash with "unconfirmed reports saying it MAY have been attacked"

Admin
Posts : 90527
Join date : 2012-01-04
Location : Woodstock Nation
Yes I saw that some are using the phrase shot down. Some one has it in for Malaysian Airlines apparently.

All 280 passengers and 15 crew were killed in the crash. The Malaysian Airlines jet was shot down by the BUK Missile System according to Interfax.

Curiously, Anton Gerashchenko, advisor to Ukraine ministry of internal affairs, had a prepared explanation for everything that happened half an hour ago, long before Ukraine even announced it would begin a probe into the flight crash
http://www.zerohedge.com/news/2014-07-17/fingerpointing-begins-ukraine-accuses-rebels-shooting-down-airplane-rebels-deny

What Putin HAS done is put more pressure on the bad guys with the BRICS bank, it has been suggested the bad guys were either after Putins plane or this was a warning to him

This could still turn out to be a unwanted mech/elec failure and no malicious intent, we shall see