Constitutional Court Action Against the BANKS in South Africa

Constitutional Court Action Against the BANKS in South Africa on Wed May 16, 2012 5:28 pm 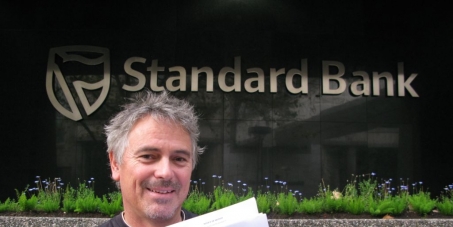 Why this is important

STOP THE BANKSTERS' TYRANNY AGAINST HUMANITY.
Michael Tellinger made global history on the 24th April 2012, in Johannesburg when he filed his 1100-page NOTICE OF MOTION against Standard Bank in the Constitutional Court of South Africa, accusing the bank of unlawful and unconstitutional activity. Tellinger also served the legal papers on the RESERVE BANK OF SOUTH AFRICA and the MINISTER OF FINANCE, alleging that they are jointly and consciously implicated in the unscrupulous activity that has led to unimaginable financial hardship of the South African people. But this is not just a South African issue, the unlawful actions of the banks have affected every human being on this planet, especially for the past 100 years.
For too long have banking giants been unassailable and untouchable by the common man. Thousands have been repeatedly frustrated by the invisible protective legal shield around the banks, created by the legal system that seems to support their unlawful actions. Tellinger has changed this forever.
The lack of control and intervention by the MINISTER OF FINANCE has allowed the banks and the RESERVE BANK to do as they please with impunity and in the process have enslaved millions of honest, hard-working South Africans to a life of misery and debt through the banks’ unconstitutional activities.
The Constitutional Court is the highest court in the land that makes the laws and is mandated to develop common law principles. The legacy follows Nelson Mandela’s vision, that no matter who or what you represent, equality, justice and the people’s voice shall be harmonised before an independent, unbiased judicial system founded on the principles of rights enshrined in the Constitution.
People have no idea what banks do behind the scenes, how many laws they break and how they profiteer of our signatures. This will all come out in this historic trial.
While Tellinger awaits a court date, he appeals to everyone that has been harmed by their bank to join this important petition, so that it truly represents millions of honest and trusting citizens who have been unable to do so for themselves. The outcome of this case will change the laws that have allowed the banks to exploit humanity.
Sign this petition NOW – don’t sit on the fence – the banks affect all our lives dramatically.
You can download and read the whole document at www.thebigcase.co.zaand view my interview on CNBC Africa from the 7th May 2012 here: https://www.youtube.com/watch?feature=player_detailpage&v=UlHuJI5-PNc