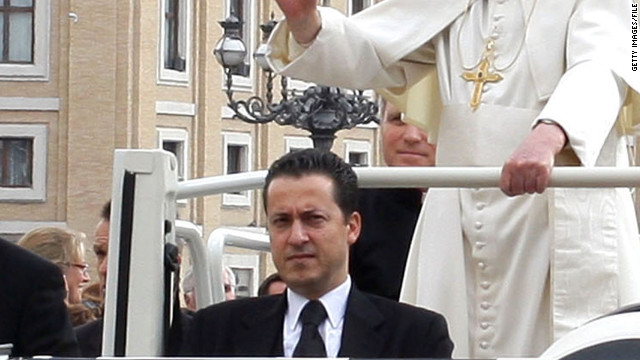 Paolo Gabriele rides in the pope mobile with Pope Benedict XVI in St. Peter's Square in March 2011
Rome (CNN) -- Pope Benedict's butler has been arrested on suspicion of leaking confidential documents to an Italian journalist, the Vatican said Saturday.
Paolo Gabriele, 46, was arrested Wednesday for illegal possession of confidential documents, found in his apartment in Vatican territory, the Vatican said in a statement issued three days later.
Gabriele, who has worked as the papal butler since 2006, is one of only a handful of people with access to the pontiff's private desk.
His job included handing out rosaries to dignitaries and riding in the front seat of the "Popemobile," a vehicle used for public papal appearances, as seen in many photographs showing Gabriele with the pope.
Last month, the Vatican gave Cardinal Julian Herranz a "pontifical mandate" to uncover the source of hundreds of personal letters and confidential documents that have been released to Gianluigi Nuzzi, an Italian journalist and author of "Sua Santita," a book that translates to "His Holiness" and includes the documents.
Nuzzi would not confirm the identity of his sources, but he told CNN that his primary source -- who he referred to as "Maria" in his book -- "risked life and limb" if ever found out.
The source worked inside the Vatican, according to Nuzzi, who refused to give other details such as the source's gender, age and if he or she was clergy or not.
Nuzzi told CNN that he has not been questioned in connection with the arrest. The Vatican called the publication of his book "criminal" when it was released last Saturday in Italian.
Feltrenelli and Mondadori booksellers both rank the book No. 1 in sales within Italy.
Nuzzi's book highlights an internal power struggle within the Vatican through numerous documents including faxes, personal letters and inter-Vatican memos. He told CNN that he received the documents during a year of private meetings in secret locations.
The documents show that the allegations of corruption and money laundering were a concern for a number of high ranking prelates, including Carlo Maria Vigano, who is now the Papal Nuncio in Washington, DC.
Vigano wrote in a series of letters to the pope that he was concerned about the spread of corruption and that his move to Washington would stir speculation.
"Holy Father, my transfer at this time would provoke much disorientation and discouragement in those who have believed it was possible to clean up so many situations of corruption and abuse of power that have been rooted in the management of so many departments," according to his letter which was published in the book.
The Vatican has not denied the authenticity of the documents, but instead says the breach of privacy is a criminal act.
The 108-acre city-state has its own judicial system, distinct from the Italian judicial system. CNN senior Vatican analyst John Allen pointed out that its courts normally prosecute the likes of pickpockets, "not alleged moles."
Thus, the Vatican doesn't have facilities to incarcerate anyone on a long-term basis and the civil and criminal penalties it typically metes out are limited, Allen said Saturday. He speculated that, for these and other reasons, the Vatican may ask -- assuming that it determines there is enough evidence against Gabriele -- that any such trial occur within the Italian judicial system.
"The question then would become: Does the Italian government want to pick that (trial) up?" said Allen, a senior correspondent for the National Catholic Reporter. "In addition to being an embarrassing scandal for the Vatican on its own terms, this also has the potential to become ... a diplomatic contretemps."
For now, Gabriele is being held in a special cell within the Vatican City, a walled enclave within Rome, according to Vatican spokesman Federico Lombardi.
Lombardi said the pope was "saddened and shocked" at the arrest.
The Vatican said the first phase of its preliminary investigation, under chief prosecutor Nicola Picardi, had now ended. An investigating judge, Piero Antonio Bonnet, is leading the next stage of the investigation, which could lead to a trial or acquittal.
Gabriele has appointed two lawyers of his choice to act at the Vatican Tribunal, and has had a chance to meet them, the Vatican statement said.
"He enjoys all the legal guarantees provided by the criminal code and criminal procedure in force in the State of Vatican City," it added.