OUT OF MIND » NEW EARTH AWARENESS » SCIENCE & TECHNOLOGY » The Water of Life | H3O2 the Healing Power of 'Structured' Water - What Is The Fourth Phase of Water? 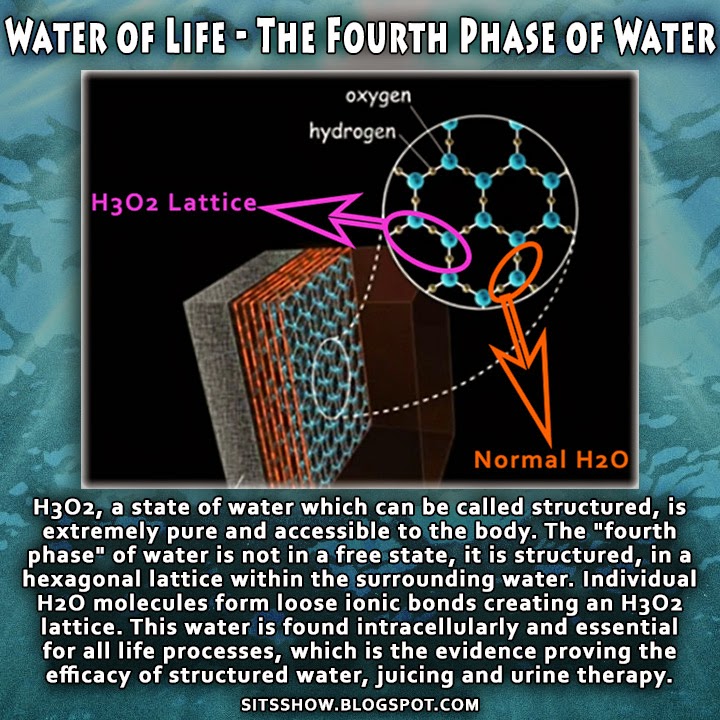 Julian and I have been researching water for several years, covering structured water, distilled waters, Juicing and even Urine Therapy.

All of these sources of water have one unifying property; the so called fourth phase of water.

While it may seem hard to understand, this water is simply H3O2, a state of water which can be called structured, and is extremely pure and accessible to the body. The reason why is because the water is not in a free state, it is structured, in a hexagonal lattice with the surrounding water. Individual H2O molecules form loose ionic bonds creating an H3O2 lattice. While this water is not "free" in same way as H2O, it is a liquid can move, although due to the interconnectedness of the lattice, has more viscosity.

Normal H2O is in a state which allows for solutions to be formed, a free state, this is the water we are familiar with in everyday life. The "added" Hydrogen and Oxygen allow for an ionic bonding of the water which is essential for life.

As shared in the second video, an interview by Kerry Cassidy of Project Camelot, the H3O2 water is distilled by the body, and is found intracellularly (within the cells). This water is essential for healthy cell function, which of course will causally heal other deficiencies. One of the reasons juicing and urine therapy are so effective for body rejuvenation (healing of cancer and nearly every other medical condition) is this infusion of structuralized water. For more information on the power of distilled liquids see this article .
- Justin
Source   -  Waking Times 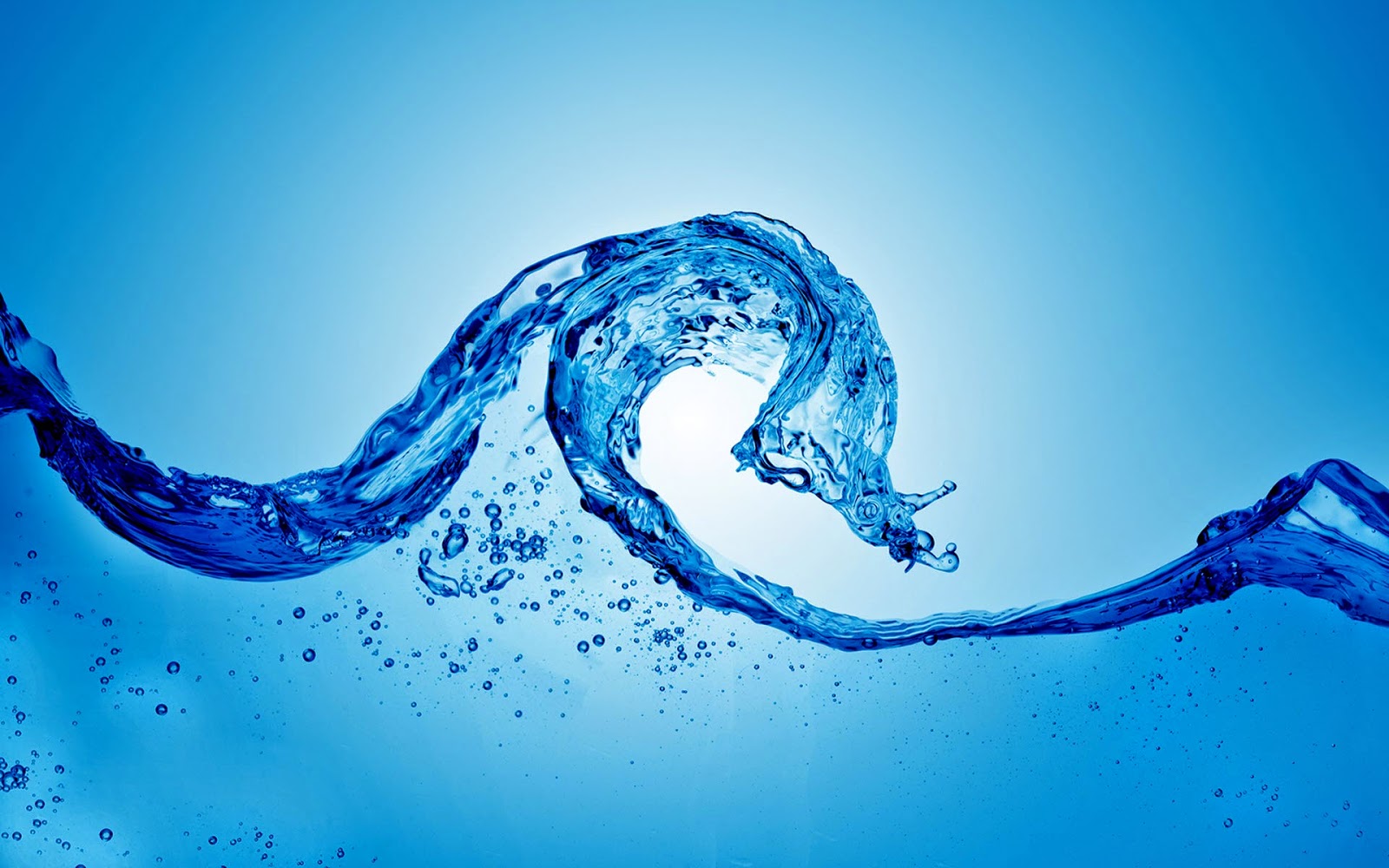 University of Washington Bioengineering Professor Gerald Pollack answers this question, and intrigues us to consider the implications of this finding. Not all water is H2O, a radical departure from what you may have learned from textbooks.
Dr. Gerald Pollack, University of Washington professor of bioengineering, has developed a theory of water that has been called revolutionary. He has spent the past decade convincing worldwide audiences that water is not actually a liquid.
Dr. Pollack received his PhD in biomedical engineering from the University of Pennsylvania in 1968. He then joined the University of Washington faculty and is now professor of bioengineering. For years, Dr. Pollack had researched muscles and how they contract. It struck him as odd that the most common ideas about muscle contraction did not involve water, despite the fact muscle tissue consists of 99 percent water molecules.

Water Research happens at Pollack Laboratories , which states, “Our orientation is rather fundamental — we are oriented toward uncovering some of nature’s most deeply held secrets, although applications interest us as well.”
Uncovering nature’s secrets involving water is what Dr. Pollack, his staff and students do best.
In his 2001 book, “Cells, Gels and the Engines of Life ,” Dr. Pollack explains how the cell functions. Research suggests that much of the cell biology may be governed by a single unifying mechanism – the phase transition. Water is absolutely central to every function of the cell – whether it’s muscle contraction, cells dividing, or nerves conducting, etc.
This extraordinary book challenges many of the concepts that have been accepted in contemporary cell biology. The underlying premise of this book is that a cell’s cytoplasm is gel-like rather than an ordinary aqueous solution.

The Water in Your Cells Give Them Their Negative Charge
Other inherent differences between regular water and EZ water include its structure. Typical tap wate r is H2O but this fourth phase is not H2O; it’s actually H3O2. It’s also more viscous, more ordered, and more alkaline than regular water, and its optical properties are different. The refractive index of EZ water is about 10 percent higher than ordinary water. Its density is also about 10 percent higher, and it has a negative charge (negative electrical potential). This may provide the answer as to why human cells are negatively charged. Dr. Pollack explains:

Oddly, if you look at a gel that has no membrane, you record much the same potential — 100 millivolts or 150 millivolts negative. The interior of the cell is much like a gel. It’s kind of surprising that something without a membrane yields the same electrical potential as the cellwith a membrane.

One of the greatest surprises is that the key ingredient to create EZ water is light, i.e. electromagnetic energy, whether in the form of visible light, ultraviolet (UV) wavelengths and infrared wavelengths, which we’re surrounded by all the time. Infrared is the most powerful, particularly at wavelengths of approximately three micrometers, which is all around you. The EZ water can build on any hydrophilic or water-loving surface when infrared energy is available.
It builds by adding layer upon layer of EZ water, and can build millions of molecular layers. This is how it occurs in nature. For example, ice doesn’t form directly from ordinary H2O. It goes from regular water to EZ water to ice. And when you melt it, it goes from ice to EZ water to regular water. So EZ water is an intermediate state.

“Glacial melt is a perfect way to get EZ water. And a lot of people have known that this water is really good for your health,” Dr. Pollack says.

Testing water samples using a UV-visible spectrometer, which measures light absorption at different wavelengths, Dr. Pollack has discovered that in the UV region of 270 nanometers, just shy of the visible range, the EZ actually absorbs light. The more of the 270 nanometer light the water absorbs, the more EZ water the sample contains. EZ water appears to be quite stable. This means it can hold the structure, even if you leave it sitting around for some time. Water samples from the river Ganges and from the Lourdes in France have been measured, showing spikes in the 270 nanometer region, suggesting these “holy waters” contain high amounts of EZ water. According to Dr. Pollack, there’s compelling evidence that EZ water is indeed lifesaving…

[size]
Where can we get structured water?
Spring water — under pressure (deep in the ground) becomes structured.
Glacial melt — ice turns into Structured Water (EZ water) when melting . . . The phase between liquid and solid is structured water.
Vortexing — A vortex occurs naturally in nature, as in streams, rivers, waterfalls, etc. The vortex is a kind of mechanical perturbation or agitation. Vortexing is a very powerful way of increasing structure. There are devices on the market which vortex water.
Juicing — is water that comes from the plant cells. Structured juice water!
Antioxidants — Most of the tissues in our body are negative. Our cells are a negative charge; oxidants are a positive charge. Antioxidants maintain the negative charge in our body.
Sunlight — critical to our health. Light builds Structured Water (EZ water.)
Circulation — Red blood cells work their way through capillaries; light is the driver of flow. Add light and flow increases. Something other than the heart (pressure) is driving the blood.
Infrared light — energy is generated everywhere. It drives the processes in your body.
The fourth phase of water: starts with the basics of what we know about water…from simple experiments we figure out this fourth phase of water. What’s the nature of this fourth phase? Why is this interesting? It applies to everything water touches. It’s in the sky and the clouds. It’s in the oceans, lakes and rivers, and it fills the inside of our body.
[/size]
_________

This is a very important interview involving the healing properties of a special kind of water created by a black project scientist who was working to cure his wife. He succeeded and since then, via word of mouth the story spread.

Eventually, he teamed up with Jef Harvey another scientist and alternative health practitioner who was told he had only a few days to live. After using this water he recovered from life threatening, kidney and liver damage and is now dedicated to making this water available to the world.

(see below for links with further investigation)

NOTE: THIS INTERVIEW WAS A RERECORD OF AN ORIGINAL LIVE BROADCAST ON THE CAMELOT LIVESTREAM CHANNEL. DUE TO PROBLEMS WITH ECHO THAT INTERVIEW HAS NOW BEEN REMOVED FROM LIVESTREAM.

Jef Harvey Background (Jef is spelled with one "F")...

Jef spent six years in the United States Navy and was inducted into a watcher group that infiltrated many of the Jesuit/Knight of Malta controlled military organizations. He was assigned to EC Division, an electronics unit and worked in the Intelligence Center on board the now decommissioned aircraft carrier CV-67.

More than 15 years of work experience as employee of “Fortune 200” size corporations and more than 35 years as an entrepreneur founder with three start-up companies to his credit. Took a startup company with $5 million initial investment to NASDAQ with a peak market cap of over $120 million. Consulted to major Fortune 50 companies on technology and strategic planning. He holds 24 U.S. patents, and at least 24 U.S. patents are in application stages. Has licensed some of his patents to major corporations for high definition displays and 3D. Has done design work for the Disney Corporation. Built and invented a laser video projector in use by US government and other entities. Built a computer disk that is 1 million times faster than the ones in use today. Worked on and help design fighter cockpit displays. Helped on displays for submarines.

Youngest recipient of a National Science Foundation grant (16) when he received it. He had to get permission to receive the grant as he was not of legal age, and also had to be driven to and from the University and NSF site because he was not old enough to drive. Started as a rocket scientist for a major contractor to US government at the age of 16 in theoretical mathematics and space flight mechanics and propulsion systems while attending high school. Was a manager for aeronautics contractor by the age of 21. Attended university also during high school at age of 16. Was the youngest in his class and graduated at age of 17 from a private school.

Award of Merit for Technology for the Olympic Games.

FOR MORE INFORMATION OR TO DO FURTHER INVESTIGATION:


A 20 minutes ted talk by Dr. Gerald Pollack, where he explains his findings step by step and in an easy to understand way.The Fourth Phase of Water: Dr. Gerald Pollack at TED https://www.youtube.com/watch?v=i-T7tCMUDXU#t=19

(the above link sells the cosmetics for half price)

OUT OF MIND » NEW EARTH AWARENESS » SCIENCE & TECHNOLOGY » The Water of Life | H3O2 the Healing Power of 'Structured' Water - What Is The Fourth Phase of Water?