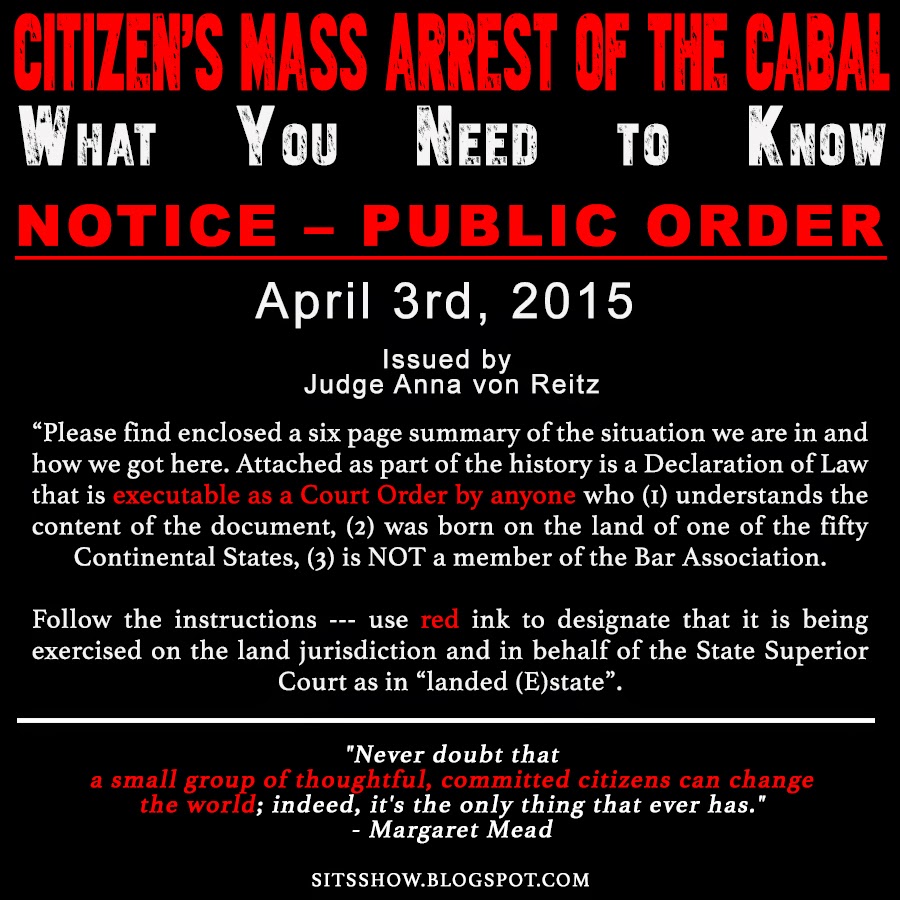 Judge Anna von Reitz has been sharing information about the Corporate takeover of the United States of America for some time. I just recently discovered her writings. I do not know if this notice was actually served on any of the agents of government by Judge Anna, if anyone has more data regarding this please share it with us.


The Notice is for all to use. Anyone who is alive, understands the problem, and is willing to take action, can use this notice; (except for a Bar Association member).


As a note, I was not able to verify if Anna Von Reitz is in fact a judge. But, this does not invalidate the information she provides nor the call for a mass citizen's arrest.


She has made the case for a Citizen's arrest of the Cabal, which has breached the trust relationship of the people's implied consent to be governed.


We recently discussed the concepts of why this can be effective in the post How the Cabal Maintains Their Power And What You Need To Do To Stop It - Un-Consent . That article was synchronistically published on the same day as the NOTICE - PUBLIC ORDER; April 3rd 2015. And on good friday, which due to the blood moon tetrad , indicates a year of change, some assert.

Yes, it can. Because the people, or citizenry in a non legal sense of the term, have always been the true source and backing of governmental power, by our consent. A citizens led arrest, if well organized and coordinated, can work to notify the defunct powers that be that we do not consent. And where necessary, defend our freedoms from cabal controlled minions. This is the well regulated militia the founding fathers outlined in the 2nd Amendment . Not only is a Citizens led mass arrest possible, it is spelled out clearly in the constitution that we must do so for posterity.


Briefly, our true relationship to government is a trust relationship. Whether it be the constitutional republic or the cabal controlled corporation, any form of government requires the consent of the people. How this consent is procured is what determine if a government is honorable or not.


On earth, all governments are tyrannical and fraudulent, within Equity Law as supported by Natural Law, because they fail to disclose the full facts which are required for honorable consent to be given. Honorable consent, a binding contract, requires full disclosure and transparency by both parties - so as to be 'on the same page' about what each is agreeing to. This is known as explicit consent, because it requires a clear and concise affirmation of what is being agreed to by both parties.


Implied or tacit consent is the form employed by governments the world over. When government makes a claim, that you are incompetent and an enemy of the state (“Trading With The Enemy Act” (Sixty‐Fifth Congress, Sess. I, Chs. 105, 106, October 6, 1917), and as codified at 12 U.S.C.A. 95a.), it creates a presumption becoming a cured fact under Equity Law. This cured fact can then be used to create an agreement between you and the government to manage your affairs for you, because you are incompetent. For example, if a friend comes over your house and begins taking food out of your kitchen to eat, unless you tell them to stop, your friend presumes you agree to his actions because your inaction implies consent.

The cabal controlled government, despite being fraudulent due to the secret takeover of the constitutional republic, still has a mandate to rule from the people. The people's inaction, in the face of their breach of trust: a) validates their presumption of our incompetence (because we never explicitly state otherwise, and b) literally gives them consent, by us, to continue all of their plans for managing the people.

The solution is simple. We must stand up, notify them of their breach of trust, and most importantly, notify all those who have consented by their inaction, the sleeping masses. In this sense there really is no grey area, either you are working for the cabal by implied consent or you are acting to undo the tyranny by un-consenting. Literally every action we take is either a move towards freedom or acquiescence to slavery. Everytime we see the police state coercing another with a speeding ticket, dishonorable arrest, or violence, we are consenting by doing nothing. How the un-consenting behavior looks takes on many forms, but the point is action must be taken, whether within by learning and educating one's self or by sharing the truth with others.

What Can One Person Really Do?

The hard truth that many awakening minds are realizing is that in order to make real moves in the march towards freedom, our own lives will be put at risk. Speaking the truth is difficult, and can often feel lonely, as we try to slowly share what we have learned with our sleeping fellows. Taking action is even more difficult, because to act in truth and freedom, on a world of slavery and ignorance, is heresy.

Protesting and meeting in groups helps draw awareness, but does little to make any real change. Notifying the Cabal of their breach of trust, helps create the lawful backing for large group action of citizen arrest, but one man or woman can not arrest the entire cabal; especially when the general population has given them a mandate to rule. The core issue is each persons knowledge level, and what they do with that knowledge. As such, knowledge must be shared, and understood completely, which will empower each individual to realize how their actions are contributing to either freedom or slavery.

The course for freedom is more than just one thing, there is no magic bullet in this sense. We work on ourselves, to become more educated on the problem, we share what we know with others and expand our own understanding in the process, and finally after enough people started their journey of awakening, more progressive and impactful steps can be taken.

The bottom line is this must be a unified effort. The awakening movement, so to speak, is growing exponentially, and the cabal know this. They know that their only hope is to keep us divided and distracted long enough to gain consent from the sleeping masses to declare us enemies of peace. Remember, in a world of slavery and dependency on 'daddy government' someone who wants true freedom and personal sovereignty is a threat to government. It's only a matter of time before the cabal legal systems which make searching for truth and freedom illegal, come to pass. One day reading these words could mean being put in jail.

As such, all awakening souls the world over must set aside their philosophical differences, and focus on the problem that unifies all of us: pervasive ignorance and a moral imperative to take action. Instead of fighting over which insider is more accurate (Benjamin Fulford vs Karen Hudes) or whether or not aliens are real or part of project bluebeam, we need to unify under the common banner of freedom. There will be plenty of time to discuss all those fascinating topics, after the cabal's mandate of authority has been dispelled.

Our food is being poisoned, our inalienable rights are being encroached, and our ability to live life on a clean and free world is being destroyed by the ignorance and consent of our fellows. Our children will grow up on a planet with half the native species that lived in our time due to pandemic pollution, they will have major health problems as a result of denatured foods and poisonous products. And they will be dumbed down corporate debt slaves as a result of economic destruction and educational mass mind control institutionalization. When will the cycle end?

How Effective Can This Document Really Be?

The effectiveness of any citizen or people based movement is dependent on its ability to be given life by willing individuals. Consider this, there are 7 billion people on the planet, and the vast majority of them are helping the cabal stay in power, they are giving life to the cabal's plans and their version of a people based movement; a movement towards the NWO. In this sense, the power of a people's movement is already a proven case.

The key is in scope and cohesiveness. The good news is a small and organized group can do a great deal:

"Never doubt that a small group of thoughtful, committed citizens can change the world; indeed, it's the only thing that ever has."

We need only look out into the world to see how the cabal, a small group, has changed the planet. Now we must become the small group of thoughtful, committed citizens. Thoughtful meaning, rationally understood and well educated on the facts, and committed meaning willing to take the personal risks necessary to realize the goal.

This is not the first official sounding call for cabal dethronement. Other movements haven't worked because cohesive well organized action did not manifest. Acting alone is difficult, working with other like minded people is the key.

First we can discuss how to spread awareness, than those who are willing can organize to take an active step. This could manifest as a group meeting, or protest to draw more awareness. Then once enough people are willing to gain personal knowledge, begin educating them on what true freedom really is, and why the present state of government is glorified slavery.

Finally, once a critical mass has been reached, a major un-consenting campaign can begin, shutting down corporate courthouses, notifying officials of the corporate state of breach of trust, and organizing our own systems of self governance. The need for government, society managed and controlled by the elite, comes about because we do not know how to work as a community ourselves. In this sense, developing local systems of trade, organization, and resource management is essential to un-consenting.

Persistence is the key, and this is why the cabal does everything they can to keep us distracted. We may realize what is needed above, but then something happens to drain our motivation. Maybe it comes in the form of some ET savior, or insider saying 'the good guys are coming to the rescue, no need to take action!' Or simply trying to survive in modern life is enough to keep us busy.

I can't claim to be the master wayshower, I have my own distractions and issues which compel me to feel like I am alone in all this at times. But I do know that if we do nothing, nothing will change for the better. And I for one, am willing to let go of everything to ensure I leave this world better then when I came into it. I think most people deep down want to do the same.

Its a slow process of spreading awareness, building personal knowledge within and once we're ready, taking action.

The following is a brief article from Judge Anna on the need for a Citizen's arrest, and then the actual NOTICE - PUBLIC ORDER - issued on April 3rd 2015, which I pasted in this post for easy reading. Both are extremely informative, with detailed facts and references. This is excellent material for gaining key knowledge and understanding.