“The components of a myth of evil conspiracy lie deep in culture-“hardwired” as it were, to society and self, rather than produced independently at every discrete point in history.  However, the activation of those components, to mobilize people to purge evil from their midst, is a process embedded in social and historical context….Let us consider first the “depth” of those components that artculate evil in terms of inversion and perversion and yet allow a transgressive thrill in their contemplation: sexual excess, incest and cannibalism, a disorder of bodily fluids and orifices, nocturnal and secret behavior, and ritual states.  In chapter 5, I explored various psychoanalytic understandings of this symbolism, especially its reflection of a primary-process realm of bodily sensation, and I furthermore used these psychoanalytic models to understand the emergence of SRA motifs as a kind of feminist and evangelical Christian pornography.”  (Evil Incarnate by David Frankfurter, pg 208)

In recent months a disturbing story has reached a viral presence on the internet of two children living in Hampstead, UK who allege their father is the head of a Satanic Ritual Abuse cult.  The details described by the siblings, hereafter called “P” and “Q” have appeared in numerous leaked “home” videos, as well as taped police interviews and essentially the story remained the same.  The children allege that their father, an influential individual in the community and ‘friend’ of many of the teachers and staff at their school, engaged in daily violations of them and many of the children at the school.  They described how their father had killed babies, eaten their flesh and drank their blood.  Rituals were described where the children were active participants in these killings.   All of these allegations were later retracted by the children who stated that they were being abused by their step-father who appeared intent on smearing the childrens father who was involved in a bitter divorce and custody dispute with the childrens mother, Ella Draper.
At the time the ‘home video’s’ were released I waited and watched what the alternative media would do with it all.  I hadn’t watched any of the childrens testimonies because I wanted to see what was being said and who was popping up to take charge of the soon to develop campaign.  Needless to say I wasn’t disappointed, nor was I surprised to see Belinda McKenzie at the helm.  Once the ‘savior of the children’ had been firmly established I was then free to watch the childrens video’s.
I must say that the description of their ordeals was absolutely heart wrenching, nauseating and enraging.  Watching several of the so-called ‘home video’s’ of the children being interviewed by an un-named adult male, made my head hurt and I wanted to throw up.  Aside from the horrors these children were describing, what struck me was the matter of fact (and almost jovial) nature by which the children recounted their experiences.  I immediately sensed an element of people-pleasing that is very natural in children of that age and I wondered if these children had been coached or encouraged to embellish the facts, and I wasn’t alone.  The idea that children can be told, encouraged, or guided to outright lie ALWAYS rubs people the wrong way when we are talking about child abuse, no matter what side of the fence we find ourselves on.  Children are, without a doubt, the innocent victims in these cases and to be coached to make false accusations of sexual abuse is in itself an abuse. Yet it does happen.  This was my concern in watching the several home video’s where “Q” is repeatedly interview by his mothers partner.  What would possess her to allow such a high risk individual to question a minor about such things?  Why would the mother not be present, to reassure the boy, provide comfort of any kind, let alone be heard pacing about in the background (seemingly doing the dishes) offering commentary as the interview dragged along?  It all sat like a splinter in my brain.
I wrote an earlier article about Kevin Annett’s promotion of the Satanic Ritual Abuse meme which highlighted two notorious (the Martensville and McMartin) cases in the 80’s and 90’s.  I wrote this article after Annett had published several statements regarding an unknown (even to Alex Jones) cult called the Ninth Circle, allegedly operating in Montreal, Canada.  Disturbingly, Annett accused Prime Minister Stephen Harper of ordering the ‘murder’ of Constable Kal Ghadban of the Ottawa Police force, who shot himself dead in his office.  Ghadban, was hailed for his tireless work on drug crimes, human trafficking and organized crime cases.  Yet, Annett (and others) could not resist the temptation to turn a tragedy into something to do with the Almighty Kevin Annett the ITCCS. 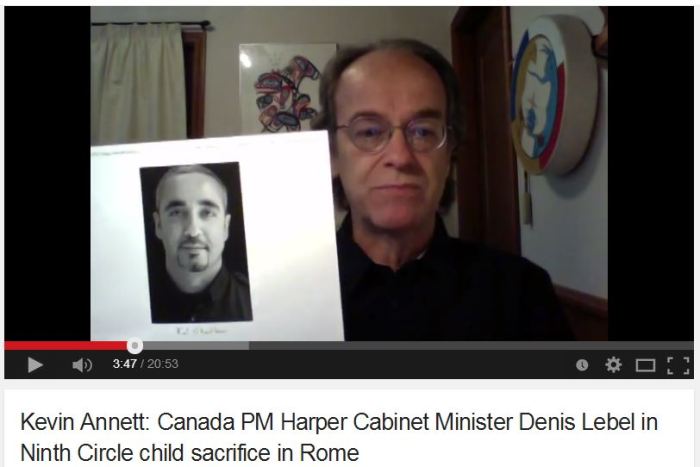 Kevin Annett Libellous Claims using Const. Kal Ghadban in an interview with Alfred Webre at his home in Vancouver. 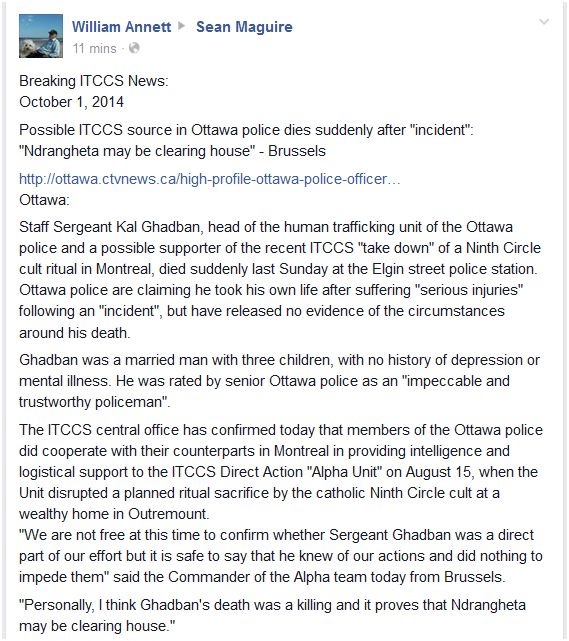 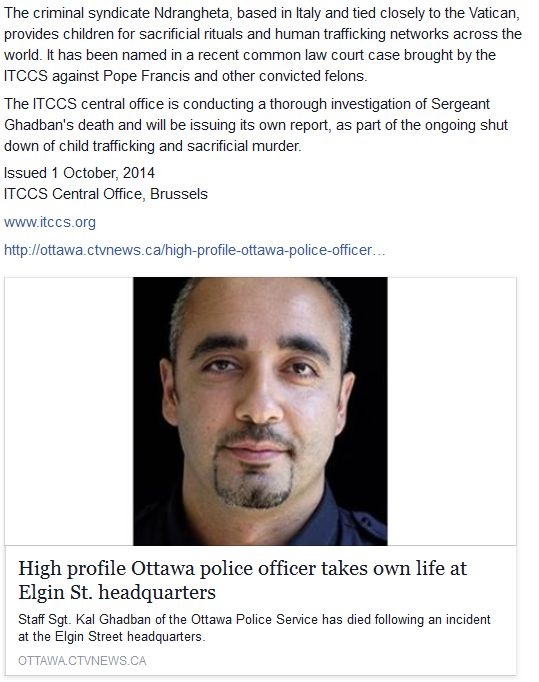 Judy Byington (a close associate and supporter of Kevin Annett’s and promoter of SRA stories) drew these conclusions on her blog, Child Abuse Recovery:

“The ITCCS and its Canadian affiliates planned to establish an ongoing inquiry into the Lebel – Lacroix connection, the murder of Officer Kal Ghadban and the role of Ndrangheta and Vatican in Canadian Prime Minister Stephen Harper government operations. “We will be seeking a new round of trials of those connected to these killings and the Canadian government’s involvement with Ndrangheta and the Ninth Circle Satanic Child Sacrifice Cult” Annett stated.” –see full text of article here

That was back in November, and of course Annett has not initiated ‘a new round of trials’ for anything and has only managed to ‘try’ the patience of his ardent followers. 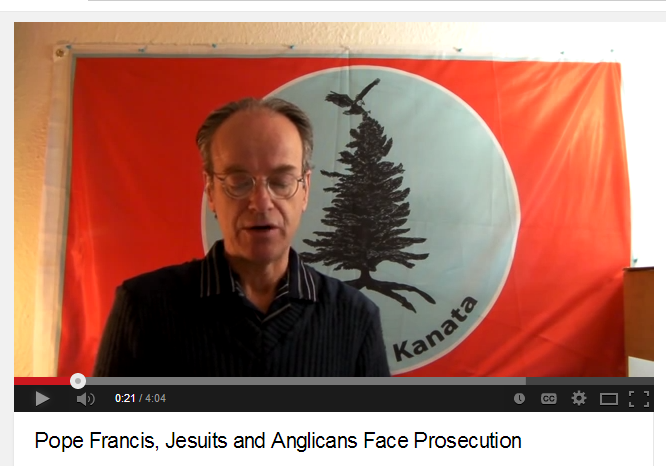 Kevin Annett gives a ‘press conference’ from his undisclosed location…(ie. the attic of his house)
So it was very suspicious that on the heels of so much ‘Ninth Circle Cult’ news and accusations flying about certain named CEO’s and higher ups within various Fortune 500 Companies, that one would expect some kind of mention or statement from Kevin’s attic regarding the Hampstead case.  After all, Annett had taken great pains to weave the intricate story of Ndranghetta and various cults operating in Eastern and Western Canada, why wouldn’t Annett draw even the smallest of links to the Hampstead cult?  Could it be because he and Belinda McKenzie and Brian Garrish were a thing once, having appeared at several rallies and speaking engagements together for the common cause of ‘saving the children?  So why did Annett go silent these past weeks when all eyes and ears were turned to the goings on in camp McKenzie?  Better yet, why did Kevin Annett ignore Araya Soma’s pleas for help when she brought Ella Draper’s story to him of two children being raped in a church on a daily basis by a Satanic Cult run by their father?  Why would he support someone as flimsy as Toos Nijenhuis, and yet not come to the aid of the children of Hampstead? 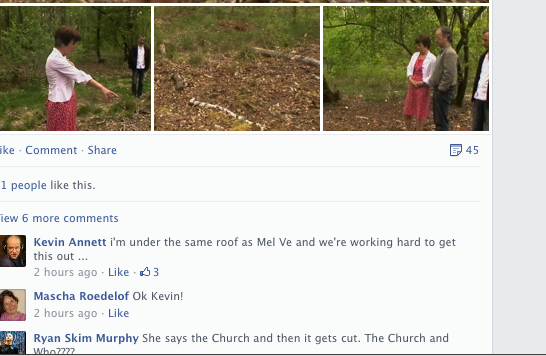 My guess is that he may have been warned off by whoever is orchestrating this fiasco; after-all, Annett is poisoned fruit in the UK after his recent outing as a womanizer and con-man and shill .  And it may be that Annett had no way of spinning the story to his advantage without some serious backlash from his few remaining supporters.  In any case there is no denying that Annett’s prior association with the people involved leaves many questions unanswered.
Here’s what we know.
Annett was supported by McKenzie publicly in 2010 and 2011 when he travelled to the UK to appear at various rallies such as Protest the Pope.  Annett spoke in front of crowds and gave media interviews and appeared with McKenzie and Brian Gerrish as is seen in these photo’s: 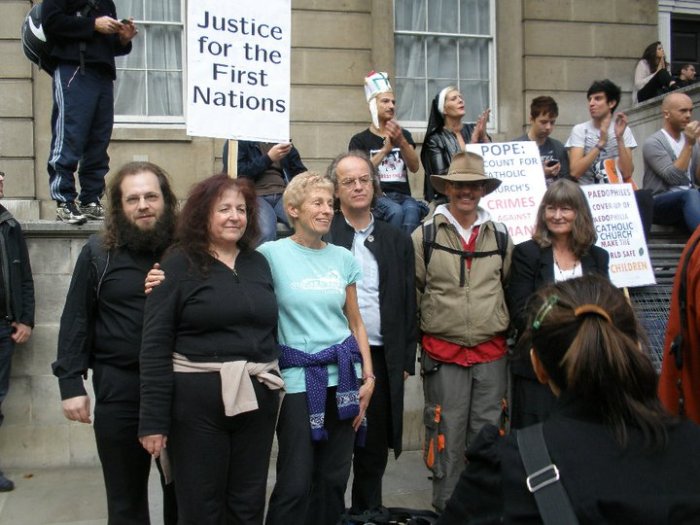 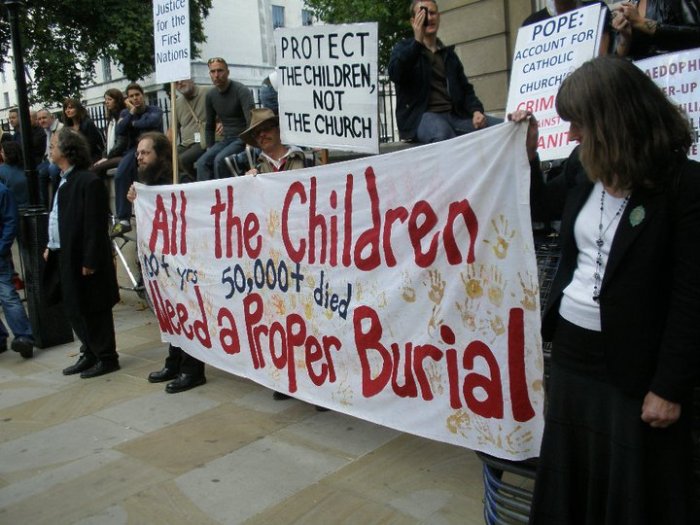 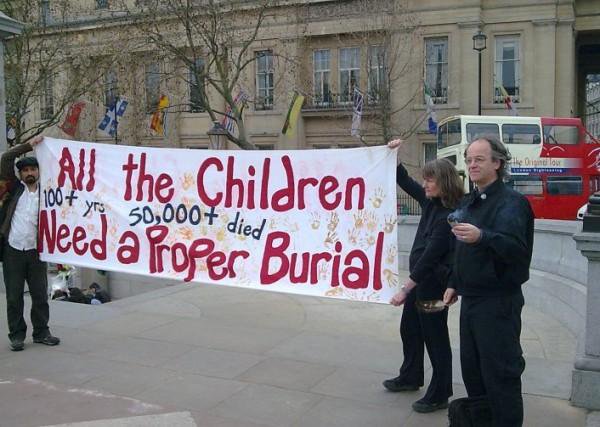 Kevin Annett speaking with Robert Green as Holly Grieg and her Mother look on. 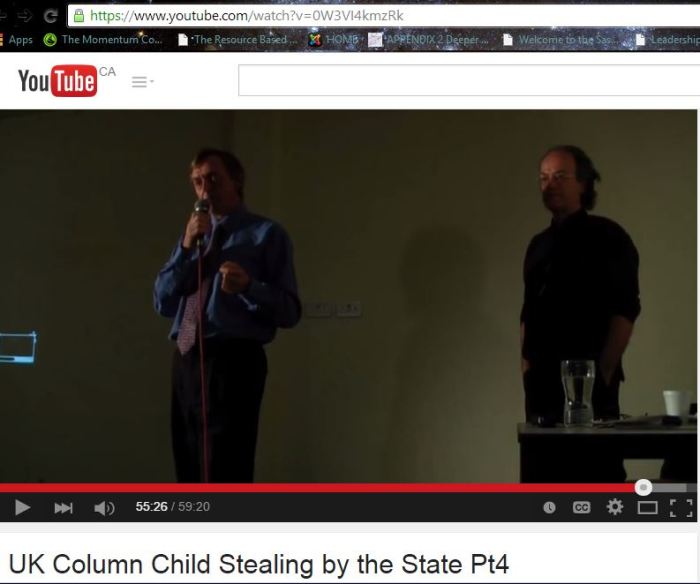 Perhaps there is no more honor among shills than among thieves, and I can say shills because plenty of evidence points to the McKenzie and McKenzie Friends as being just that:
1. McKenzie Friends is an organization that claims to provide assistance and help to victims and has the legal right to appear with those victims in court, yet Belinda McKenzie claimed to be barred from the public hearings of the Hampstead case in an attempt to smear the ruling by Justice Pauffley
2. Belinda McKenzie and Sabine McNeill are now in hiding from authorities in relation to the publishing of the names and addresses of those ‘accused’ of rape, torture and murder of children.
3. McKenzie called for ‘Amnesty’ for pedophiles, stating that they should be rehabilitated not punished.
4. The children remain as wards of the state, and although they appear happy, justice has not been served so long as their mother and step-father fail to stand in the light of the truth.  McKenzie and McNeill appear to be less concerned with the welfare of the children than with the damage done to their reputations.
In the mean time, two of the activists seen harassing passers-by and members of Christ-Church were arrested on April 4th outside the Ecquador Embassy at a rally to support Julian Assange.  Those involved with the Assange rally appeared unconcerned that Christine Sands of Million Mask March and Neelu Berry (aka. Ved Chaudhari) were being taken in by authorities.  Neelu has a well documented history of  working with and supporting Kevin Annett and his work and has likely used Annett’s fake warrants and notices.  Why has Annett, McKenzie and McNeill abandoned Neelu and Sands in their hour of need?  Has McKenzie been questioned?  Of course not, because if the rumors of her being MI-5 are correct, then she would have been there to help ensnare Neelu/Ved not to help her and she would have done her job very well. 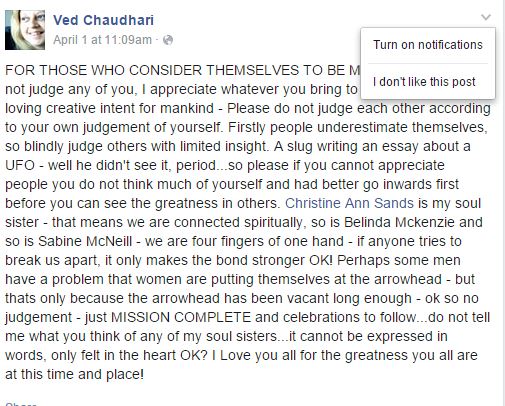 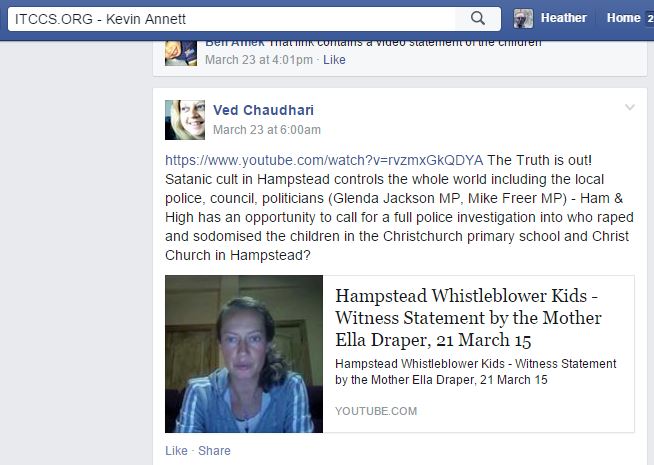 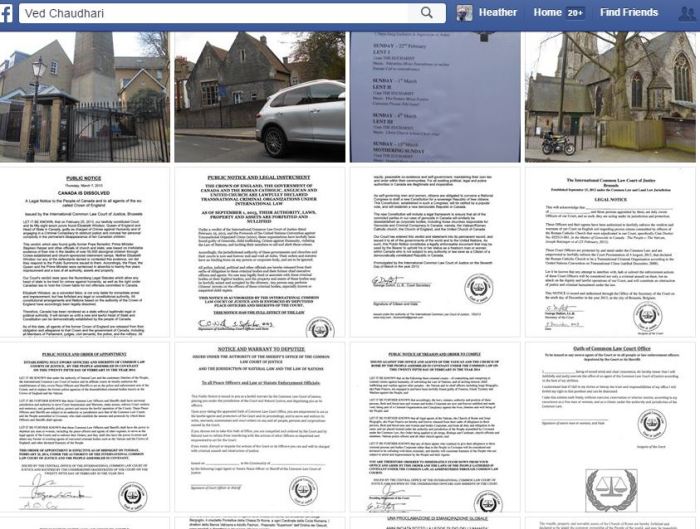 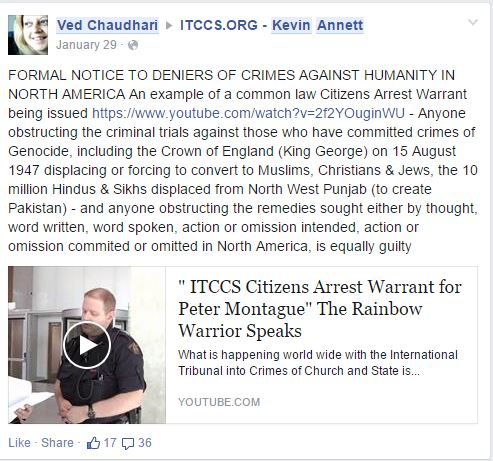 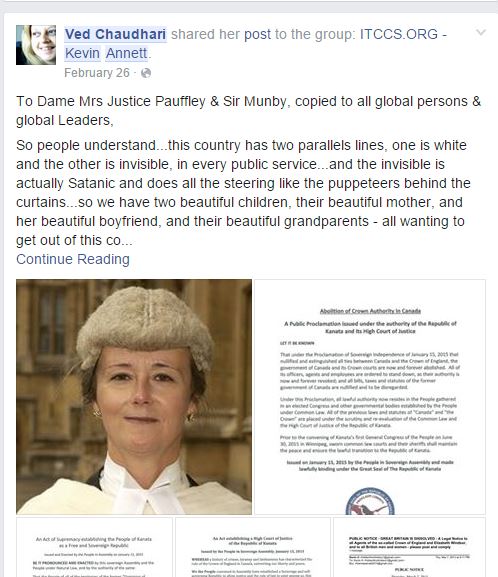 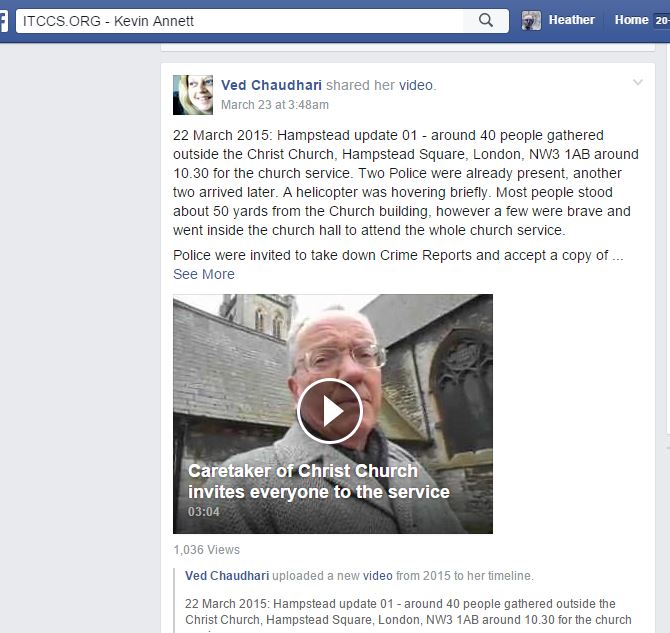 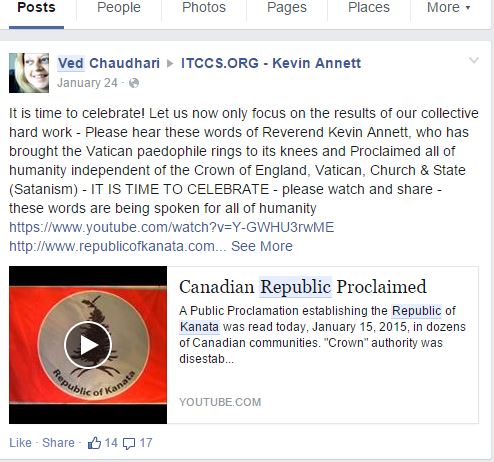 Details of Neelu’s arrest can be read here .  Strangely, Sands arrest details have yet to be published.
For an excellent article of the ‘players’ in this game of shills, read the following:
https://orderoftruth.wordpress.com/2015/04/10/the-nasty-side-of-child-abuse-vigilantism-protest-campaigns-vipaedophiles-uk-childabuse/
p.s.Why did Kevin Annett really not show up in Glastonbury at the Truth Juice event??? 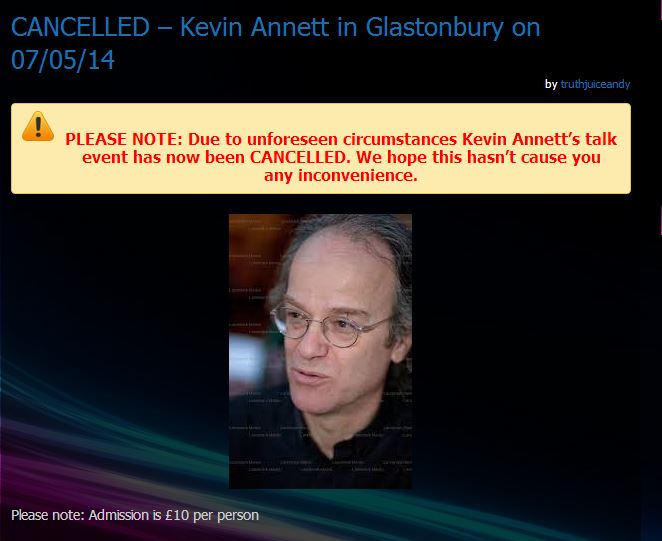