The National Debt Is Not For Americans To Payback | History of The Corporate Takeover of The Continental United States on Mon Apr 13, 2015 5:06 pm 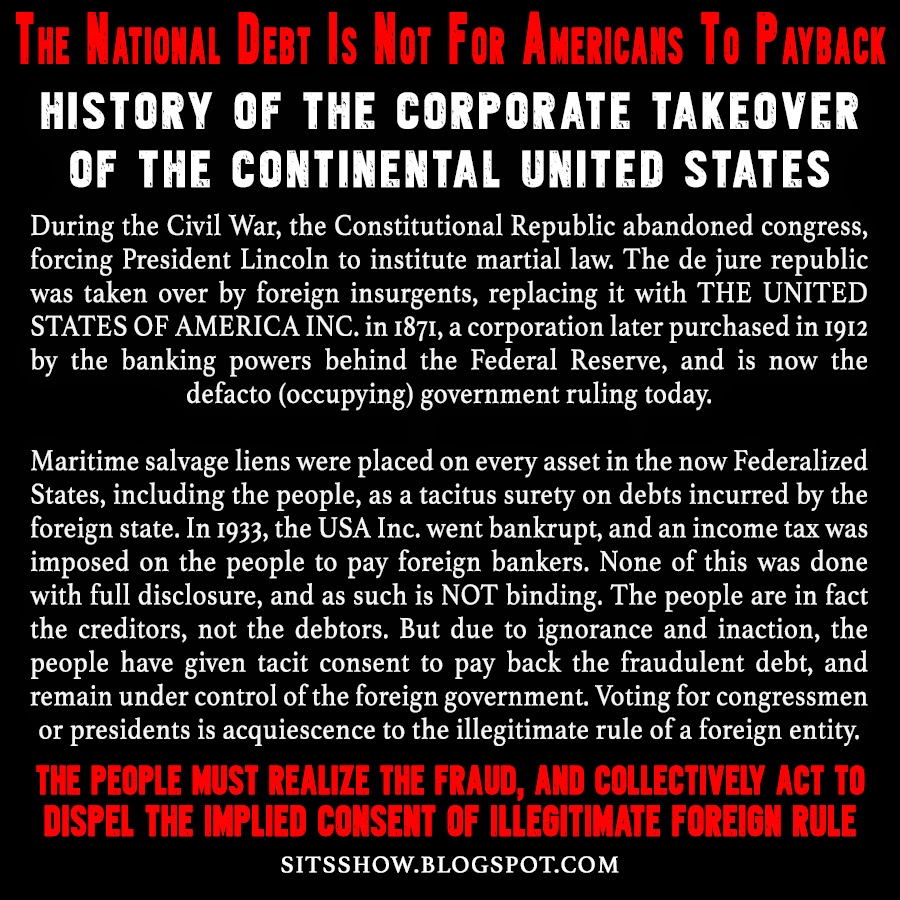 This is yet another empowering disclosure by Judge Anna. The National Debt, which has been the cause of so much anxiety in the past 10 years, is in fact a foreign debt incurred by the USA, Inc. The people are in fact the creditors of this debt, and are owed vast sums by the foreign corporation, USA Inc and Federal Reserve. However, due to pervasive ignorance, and acquiescence on the part of the people, we have not been able to un-consent from the presumption of foreign rule and repayment of bogus debt.

Please spread this information far and wide. For all the updates regarding this people's action for freedom, [url=http://sitsshow.blogspot.com/search/label/anna von reitz]click here[/url].

On April 3rd 2015, Judge Anna issued a Notice and Public Order , which can be used by the people to dethrone these foreign insurgents; click the link above for instructions on how to do this. It is essential that a majority of the people do this, and also continue to un-consent in all of the various ways we comply. Voting in any capacity, provides a tacit consent to the rule of our would-be masters. As such we can not do this alone. All of our sleeping brothers and sisters are literally co-signing to slavery by remaining ignorant and participating in the illegitimate government.

For more on occult symbolism see the post De-Mystifying the Occult Seminar - The Nature of Sacred Symbolism and Hidden Knowledge by Mark Passio .

It is CRUCIAL that everyone understand the basic structure that was created by the Founders and which has endured ever since. – Judge Anna von Reitz
There are two entities called “the United States” — the Continental United States comprised of fifty (50) geographically defined nation states acting as a federation