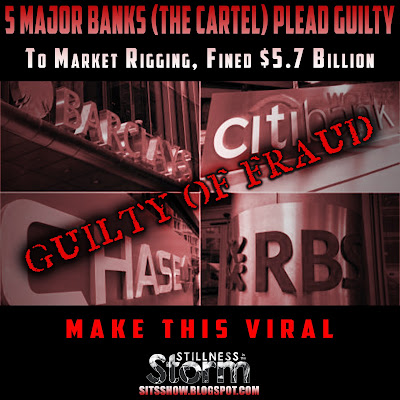 There are 2 major points which one can glean from this to reveal the fraud of government and the total lack of justice in the system.


Firstly the banks in question, Citigroup, JPMorgan Chase, Barclays and the Royal Bank of Scotland, are major banks who are heavily monitored by so called regulating agencies, the likelihood that this activity went unnoticed by them is either a deception at worst or reveals their total incompetence at best. In either case, the average joe reading this should conclude that the system doesn't work, and a major changes must be effected.


Second, these banks were fined, not shut down, not prevented from continuing business, but given a slap on the wrist. $5 billion is the cost of doing business for these institutions, and they will most likely continue to manipulate the markets, rig the game in their favor defrauding most of the Earth's population.


They have violated the public trust, and led people to believe that the markets are fair and honest. This is a MAJOR RED PILL, which every one on the planet should take to heart and deeply understand.

Quite possibly this is part of the infighting in the Cabal we have been hearing from some.


Since there is no Justice in the Justice system, we the people, must become it. I suspect that part of what the International Tribunal for Natural Justice will do, is hold these banks and the fraudulent government regulators accountable for their crimes. Trust is instrumental to having honorable dealings, and if there is no trust, any contractual agreement which spawned from such a nefarious union is non binding and void.

On Wednesday, the Department of Justice announced that five major banks – Barclays, Royal Bank of Scotland, JPMorgan Chase, UBS and Citigroup – will be fined approximately $5.7 billion after pleading guilty to crimes involving the manipulation of global currencies and interest rates.
The DoJ noted that four of the banks – Citigroup, JPMorgan Chase, Barclays and the Royal Bank of Scotland – have been forced to plead guilty to antitrust violations in the foreign exchange market, after they allegedly worked together to enhance their profits by manipulating the $5-trillion-a-day foreign exchange market to $10 billion.
At a press conference on Wednesday morning, US Attorney General Loretta Lynch said that starting as early as 2007, currency traders at several multi-national banks formed a group they dubbed “the cartel.”
Lynch explained that almost every day for more than five years, traders in this “cartel” communicated through coded language in a private electronic chatroom to manipulate the market’s exchange rate between euros and dollars.

“They acted as partners, rather than competitors, in an effort to push the exchange rate in directions favorable to their banks, but detrimental to many others,” Lynch said. “The prices the market sets for those currencies influence virtually every sector of every economy in the world. Their actions inflated the bank’s profits, while harming countless consumers, investors and institutions around the globe.”

The New York Times  noted that when one member of the “cartel” would “build a huge position in a currency and then unload it at a crucial moment, hoping to move prices,” other traders would agree to “stay out of each other’s way.”
Business Insider  reported that this is an unprecedented settlement for the parent companies of so many major banks “to plead guilty to criminal charges in a coordinated action,” and that JPMorgan Chase and Citigroup are the “first major U.S. banks to plead guilty to criminal charges in decades.”

Posts : 2616
Join date : 2012-01-17
Age : 71
Location : NH
Well certainly No surprise here, with the possible exception of there being an actual "GUILTY PLEA", as opposed to a Settlement Agreement with NO actual Guilt admission or conviction.
But aside from this bussiness as usual BS, my ? is When do they have to pay up and where does that money go ??
Oooooops silly me. I forgot, that's just Corp. Profit.