OUT OF MIND » THE INSANITY OF REALITY » CABAL AGENDA & WORLD DOMINATION » Watch This – The Law: Reclaim Your Rights – You’re Worth $15 Million!

Watch This – The Law: Reclaim Your Rights – You’re Worth $15 Million!

Watch This – The Law: Reclaim Your Rights – You’re Worth $15 Million! 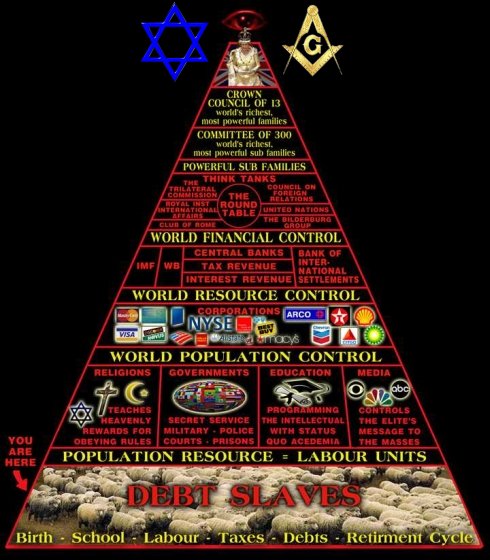 Did you know that you are worth $15 million dollars? And guess who owns you? The Roman Catholic Church. Find out how and why here! Also, be sure to read the information below the videos. It will help you go in the right direction.

1302 Pope Boniface VII created the first express trust in history.   When the crusaders left their homes and riches behind, the church developed a plan to help their “trusted” friends.  In essence, “I will hand over my estate to you while I go to Jerusalem to fight for Christ.”  The person that is given the rights to these estates becomes the trustee, the owner of the property.  In some cases, when the knights came back from fighting, they found out that the trustee decided to keep their possessions.  The courts would not support the knights because the trustee had the right to keep the property.
Because of the Roman Catholic Church’s desire to control through their inquisitions, they decided they would create the first express trust, called unum sanctum which was written on a papal bull and placed in their vault.  On the papal bull, it says that all of the souls in the world belong to the Roman Catholic Church and they do because no one has challenged their claim.  Your birth certificate is the title of the soul that they own in their registries. They have registered you and that is the title to your soul.
1. https://www.youtube.com/watch?v=PNkvWvv-Dew
The Inquisition began because many people were waking up to the tyranny and oppression of the Roman Catholic Church in the early 1300’s.  The RCC killed these people due to their need to control us.  200 years later during the Renaissance, the
Hermetica  was written, which is where the bible draws all of its inspiration from.  This knowledge was also suppressed by the RCC.
Elite families control the Vatican and the corporation (the incorporation of the Apostle Peter).
325 AD – The emperor, Constantine the Great, made a donation to his Pope, Sylvester saying, “Saint Peter is the Apostle of Jesus of whom Jesus gave this kingdom of Earth to, therefore we are going to claim taxes.”  We pay taxes to Rome, the Kazarian and Venetian black nobility elite families based on a fictional document  from Constantine.
Book: Bablylon’s Bankster exposes how Monotheism, Military, Money and Monarchies cannot work separate from each other.  A lot of people don’t understand that the Vatican and the Superior General of the Jesuits actually sit on top of the pyramid, behind the scenes and work together.
2. https://www.youtube.com/watch?v=FZ5F9YUTLRw
3. https://www.youtube.com/watch?v=V6_bR-Uy6Eg
4. https://www.youtube.com/watch?v=emC3dvypHvU
5. https://www.youtube.com/watch?v=_1Hhetuc-Bs

The amount of credit the feds earned from investing in securities the credit borrowed from us via the registration of our births has pre-paid anything you might ever want or need. We are the creditors, and the federal mafia is the debtor. They owe us interest for using our credit, yet, since they (the Public) are bankrupt, there is no ‘substance money’ so we, as creditors, will have to get paid by taking equity, in the form of our houses and cars, as the ‘set-off’ – the balancing of the account. They owe us interest on our credit which they are using to pay for the manufacturing of all the goods and services we are buying. We have already paid for the product before we buy it. We are still the principals of the securities because said investment was never disclosed to us. The feds are hoping we won’t request the profits of our investments, however, if and when we do, it is substantial enough that we would never have to work again. We could never spend it all.

WE DO NOT NEED, NOR WERE WE EVER MEANT, TO ‘WORK FOR A LIVING’

The government floated a bond against our future earnings by using our birth registrations as the collateral for our ‘promise to pay’. Income tax is just their having ‘educated’ you to pay the interest on the loan YOU lent THEM. When we access our Direct Treasury Accounts, those held at the BC/ FRB under our SINs/ SSNs, we will no longer ‘have to’ work. Meanwhile, we will continue to:
[list="list-style-type:decimal;vertical-align:baseline;white-space:normal;word-spacing:0;text-transform:none;text-align:left;margin:0 0 25px 42px;letter-spacing:normal;line-height:25px;background-color:#ffffff;text-indent:0;border:0;padding:0;"]
[*]slave-labor for entities which do not exist except for the purpose of profit,
[*]do something other than what we were designed to do, and
[*]believe that we (extensions of our Creator) are worthless enough to have to pay for our existence.

[/list]
The above is an excerpt from:
HOW I CLOBBERED EVERY BUREAUCRATIC CASH-CONFISCATORY AGENCY KNOWN TO MAN
… a Spiritual Economics Book on $$$ and Remembering Who You Are
Click the link above to learn how to claim your sovereignty.
Recommended Astronomy, Astrology, Astrotheology and Occult Books From Santos Bonacci
Related:

OUT OF MIND » THE INSANITY OF REALITY » CABAL AGENDA & WORLD DOMINATION » Watch This – The Law: Reclaim Your Rights – You’re Worth $15 Million!