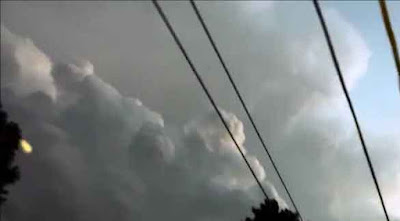 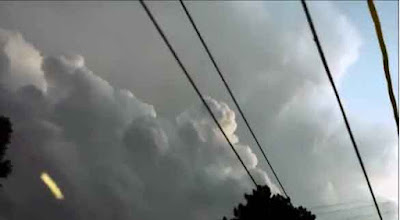 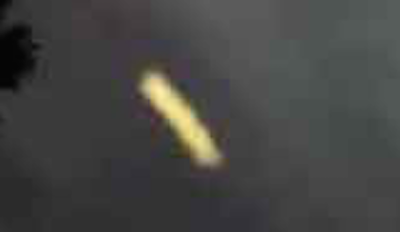 Storms are some of the best places to catch UFOs. They are known to be attracted to the high energy of the lightning and the alien drones get very excited when they get 100% charged up. This is a good example, but usually there is many.
Scott C. Waring
www.ufosightingsdaily.com

Eyewitness states:
I was shooting video of a storm cloud emitting heat lightning from our back porch. When I viewed the video I saw a streak of light that I cannot explain or rationalize. I slowed the speed and showed it to friends. It was recommended that I forward his to your organization. I am including the original video from my phone. (which is upside down) The orb appears 11 seconds in. I also included video that I inverted and cropped.

Admin
Posts : 91758
Join date : 2012-01-04
Location : Woodstock Nation
US Astronauts Were Ordered Not To Report UFOs & Aliens
“At no time, when the astronauts were in space were they alone: there was a constant surveillance by UFOs.” – Scott Carpenter
Buzz Aldrin is a brilliant man. Not simply remarkable for his intellect but a deeply spiritual man. Long since retired, Colonel Aldrin now orbits the innermost dimensions of his mind, a secretive universe as deep and mysterious as the far reaches of the moon.

As a young airman, my path took me into a close encounter with Colonel Aldrin, more than 30 years ago. As a chauffer with a radio-operated staff car, I served at Lackland AFB when Colonel Aldrin was undergoing a series of tests there. One afternoon my radio crackled that colonel Aldrin would need a ride to Wilford Hall, the large base hospital. Sadly my car wasn’t chosen. I’ve often wondered since then whether the “nervous breakdown’ this remarkable astronaut suffered was due to the government pressure or not. I think it was.
Why did Colonel Aldrin suffer a “nervous breakdown’ at that time? The weight of sudden celebrity, certainly. Deification by the adoring press and masses. But there was something more.
According to Fred Steckling, author of the book, We Discovered Alien Bases on the Moon II , Aldrin might have wanted to proclaim the truth of what he saw. Very likely, Pentagon and White House officials, fearful as always, would have cajoled, convinced or threatened him not to do so.
According to Steckling:
“The following list of facts I have learned from several individuals who are working or who have worked or been linked with NASA in some way over the years. For obvious reasons I will not now use their real names. The list below represents some of the information from three people: one is currently working in DOD missions for NASA; another started working with NASA & DOD when JSC (Johnson Space Center) was built. The third is a scientist who has worked at NASA and other facilities(and with) Edward Teller.’
There are buildings on the Moon.There is mining equipment on the Moon.
Photos, NASA photos, do exist which clearly show both of these. Hundreds, but probably thousands, of NASA photos have been tampered with. Specifically, by careful use of an airbrush, flying saucers and other UFOs can be removed, and then the photo is released to the public and/or press.
Film taken by astronauts clearly show UFOs, IFOs, Alien Vehicles, etc. The NSA screens all photos before release to the public. Everything that NASA has launched has been closely monitored by at least one ‘alien’ culture.
NASA knew about ‘alien’ activity on the Moon before Armstrong, Aldrin, and Collins ever set foot on it. Edwin Aldrin at one point found evidence that we were NOT THE FIRST to arrive on the moon. After first seeing and then taking photographs of footprints in the lunar soil (Aldrin) then saw the beings that made the footprints (the report and transcripts of conversations between the astronauts were not clear if Aldrin had physical and/or mental contact with the entities).

“Alien Vehicles flew within 50 feet of a U.S. space vehicle for one full Earth orbit and then the AV departed; again while Aldrin was present. ‘Buzz’ Aldrin had a nervous breakdown because of these events and the pressure not to talk. There have been 22 deaths (many ‘suicides’) at JSC in Houston. No astronaut who has seen AVs or ETs is allowed to talk about it, even amongst themselves. If they do and are caught they may be fined, publicly humiliated, imprisoned, or have all pensions and future salaries taken away.'(my emphasis)

How much of the above account is fictional and how much fact? Only those who went to the moon and back know for certain. There are many second-hand accounts and alleged conversations, (Google UFO Sightings by Astronauts) where both Aldrin and Armstrong state, in no uncertain terms, they saw huge ships and other signs of alien occupation of the moon.

Return to Earth, Aldrin’s autobiography, tells of his struggle with depression and alcoholism following his long and dedicated USAF and NASA career. Did NASA, CIA and the Pentagon compell Colonel Aldrin (and every other astronaut) to conceal what they saw on the moon? How much did this contribute to Aldrin’s mental problems?
Some time ago the Science Channel aired a program called “First on the Moon: The Untold Story.’ One segment described a UFO encounter that Apollo 11 astronauts witnessed during flight to the moon. Aldrin spoke of something he saw.
‘To the best of my knowledge, this is the first time that Buzz Aldrin, an Apollo 11 astronaut, had ever publicly recounted any UFO experience associated with the Apollo 11 moon mission,’ wrote Dave Stone.
Buzz Aldrin remarked, “There was something out there that, uh, was close enough to be observed and what could it be?…Mike (Collins) decided he thought he could see it in the telescope and he was able to do that and when it was in one position, that had a series of ellipses, but when you made it real sharp it was sort of L shaped.’
“NASA knew very little about, um, the object reported by the Apollo 11 crew. It was obviously an unidentified flying object,’ said Senior NASA scientist, Dr. David Baker. “But such objects were not uncommon and the history of even earth orbit space flights going back over the previous years indicated that SEVERAL CREWS SAW OBJECTS” (emphasis mine).
“Now, obviously, the three of us were not going to blurt out, ‘Hey Houston we got something moving along side of us and we don’t know what it is,’ observed Aldrin. “We weren’t about to do that, cause we know that those transmissions would be heard by all sorts of people and who knows what somebody would have demanded that we turn back because of Aliens or whatever the reason is, so we didn’t do that but we did decide we’d just cautiously ask Houston where, how far away was the S-IVB?’
The S-IVB served as the third stage on the Saturn V and second stage on the Saturn IB . It had one J-2 engine . For lunar mission it was used twice: first for the orbit insertion after second stage cutoff, and then for the trans lunar injection (TLI) . Now NASA reported the separated stage 6,000 miles behind. Obviously they didn’t detect any UFO.
Aldrin replied: “And a few moments we decided that after a while of watching it (UFO), it was time to go to sleep and not to talk about it anymore until we came back and (went through) debriefing.”
Perhaps one day, a living astronaut, a once-and-future hero, will come forward and frankly say what he saw and experienced. “One of these guys—sooner or later—has to go public,” observed one prominent UFO researcher.” This is a cosmic cover-up of the highest order.”NASA scientist, David Baker said, “There were a lot of people within the program who went off later and became convinced that UFOs existed and that led to some concern on NASA’s part where they got the agreement of the crew never to publicly talk about these things for fear of ridicule.”
Source: rense.com

It is interesting to read what other people have to say regarding this mysterious UFO case. According to UFO Sightings Daily editor Scott Waring; the object was described to be a “Flying Pyramid” passing in front of the moon. Waring went ahead and compared this mysterious UFO to the Egyptian pyramids. Can you see any resemblance to the pyramids?
Its actually very difficult to assess the actual size and shape of the object due to its incredible distance. For all we know it might must be “another” camera glitch or dead pixel even though ufologists from different parts of the world have already excluded this possibility.
YouTube UFO hunters Secureteam10 reported sighting the TR3B-type UFO abandoned in a lunar crater in images of the lunar surface captured by a camera mounted on the Lunar Reconnaissance Orbiter (LRO).
Many ufologists believe that these mysterious, triangle shaped UFO’s in fact belong to extraterrestrial civilizations that inhabit ur planet. The question is if this “strange” sightings, labeled by some as the “Flying Pyramid” could be in fact a vehicle belonging to extraterrestrials.
Here below we leave you with a video from Secureteam10 and their vdeo regarding the mysterious triangle shaped UFO which they managed to find on the surface of the moon.
Let us know your theories about what this mysterious object might be.