Latest topics
» What is this? where is this strange structure located? 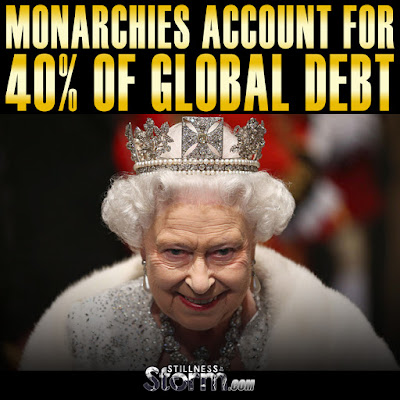 As we have discussed in several articles, the financial system is an elaborate fraud intended to keep the vast majority of humanity locked in debt-slavery. Through careful reality management or propaganda schemes, we actually have been conditioned to believe, over long millennia of history, that living requires hours of toil and labor, working for someone else who doesn't have to because they are already 'rich.'

Related Propaganda: Do You Know You’re Soaking In It? | Public Relations and Propaganda are All Forms of Mass Mind Control

Corporations own the land, sea and air, with nearly everyone acting as debtor to our feudal masters. We are told that if we work hard and get hired at the right company, join the right social group or religious organization, we will eventually get a good job and someday we might be rich too. But is it really possible to elevate oneself to the heights of status by hard work and dedication?

As many are now realizing, the answer is no, the rich get richer and the poor get poorer. The creation of money via bank credit is one of the central linch pins that keeps the very rich at the top.

We go to a bank and grovel for a loan, signing a loan application as a part of the process. Little do we know that this loan application is actually a promissory note that the Federal Reserve or other Central Bank needs to create money; because it is a form money. Our loan application is processed and converted into bank credit, and then lent back to us plus interest. In other words, the money was created when we signed an application, no vaults were depleted, no accounts were drained and transferred. It's as if we have a huge store of money hidden in an account we don't know about, which is pilfered and loaned back to us. And with this false idea firmly planted in our minds, we labor away our lives trying to payback money, plus interest, that was ours to begin with.

Related Where Does Money Come From? - The Fraud of Bank Credit | Do you own a home? A car? Do you have a credit card or a student loan?

That is just one example of a multi-layered system of deceptive frauds all designed to keep us working for the elite. And until we are brave enough to accept the truth, until we can recognize the matrix of control held firmly in our minds by blind faith and dogmatic acceptance, we will continue to be hapless dupes of our would-be masters.

These processes of debt-enslavement work over long years and through careful management, eventually culminating in a huge divide of social classes. The following article details some of the statistics for this divide.

Abundance seeks to share goods and services with as many people as possible. Hoarding of wealth, for selfish reasons, seeks to limit the distribution of goods and services, so as to maintain power over others. That is one of the primary goals of our modern day slavery system. The whip and rod has been replaced with dollars and credit cards, but the over all effect is the same. And just like other enslaved populations we must free ourselves from the tools of enslavement, not invite them.

Knowledge of the truth will set us free, so long as we are willing to let go of our attachment to the past. This is the challenge of our age, with so many people only looking to money as an indicator of success, status and pride, it's as if we hold up our shackles of enslavement as a source of reverence. But many are now realizing the truth, and so long as it is shared with others freely, we can slowly undo the propaganda and manipulation which has enticed even the most intelligent of our age to accept slavery.

A recent report from Standard & Poor’s shows that 40 percent of global sovereign debt belongs to monarchies. However, only 39 out of the 129 countries have a king or queen as head of state, estimated the agency.
Here’s a pie chart that shows the debts owed by royal states.

The most indebted monarchy is Japan, led by Emperor Akihito. Tokyo owes more than $11 trillion, over 25 percent of the total debt.

Britain’s Queen Elizabeth II, who is also the head of state of more than a dozen nations within the Commonwealth, has the second-highest debt.

S&P drew a distinction in its assessment of constitutional and absolute monarchies.

“Absolute monarchies score higher, on average, in our fiscal and external assessments, reflecting their stronger balance sheets. But constitutional monarchies have higher credit ratings, on average, than absolute monarchies, indicating the importance of the effectiveness, stability, and predictability of a sovereign's policymaking and political institutions,” said the report.

Absolute monarchies are all situated within the Arab world, ranging from Morocco in the West, to Oman in the East. They account for less than 1 percent of the world’s debt issuance and usually have better balance sheets.

Despite its large sovereign debt, an average monarchy has three rungs better ratings than the countries without a king or a queen that have an average of BBB to BBB-, says S&P.

AAA is the highest score a nation can be awarded, with D meaning a country is on the brink of default.