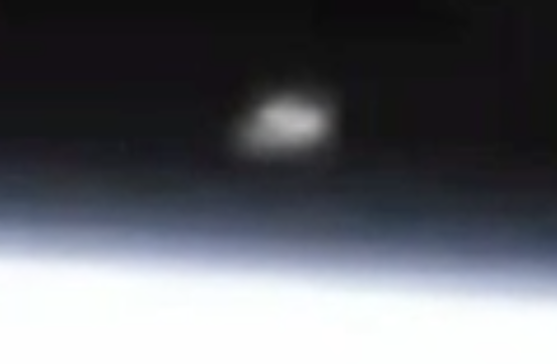 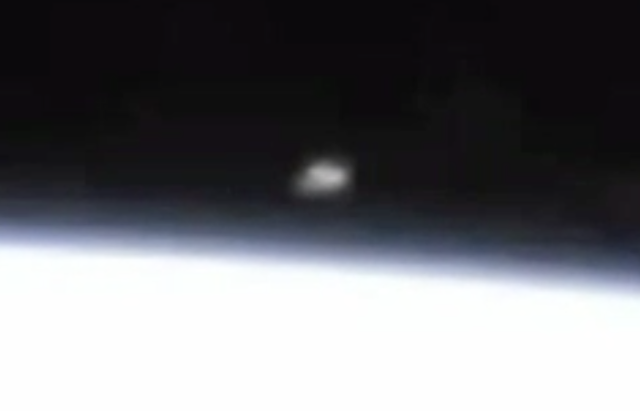 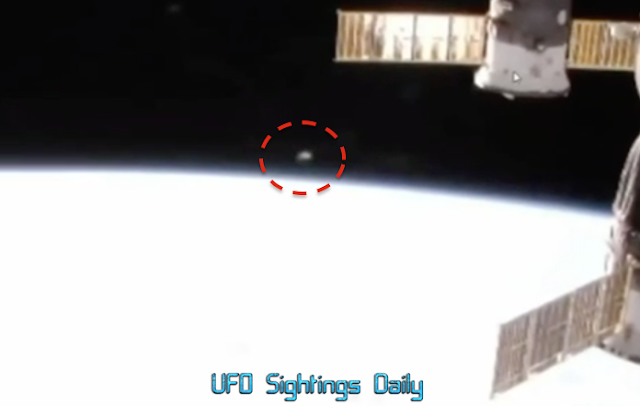 This guy tried so hard to catch a UFO at the space station. The UFO looks like a giant disk, several miles in diameter with a raised dome in its upper area. There is also a white haze around the UFO, because it looks like it still has a cloud cloak on since its so close to the space station. Its size is just mind-blowing.
Scott C. Waring
www.ufosightingsdaily.com

Eyewitness states:
I have tried for two years, trying to see UFO on the high def nasa cameras, but two days ago while looking for them I noticed that earth was white and reported on that, and I was watching the white earth, and finally caught a UFO they missed at nasa.

Another official video by NASA’s cameras on board the International Space Station has recorded an Unidentified Flying object as it ‘warps’ next to the ISS while thousands of people were watching the live feed provided by NASA. The feed was ‘mysteriously cut’ seconds after NASA noticed the mysterious object on their screen.
(via ewao.com )
This video, like many others in the recent past seem to prove that the International Space Station has become a hot-zone for Unidentified flying objects which seem to visit the ISS often these days.
UFO hunters noticed a cigar-shaped UFO zooming past the international space station at ‘warp speed’ as they called it. We are not sure if this ? UFO ‘warped’ passed the ISS, but it did appear in NASA’s official feed  moving at incredible speed. The question remains, what is it? UFO hunters firmly believe that this is another extraterrestrial vehicle caught by NASA’s very own cameras.
“This craft is moving so fast it only appears in one single, solitary frame,” said a spokesman for SecureTeam 10, the alien hunting group which spotted it .

While there are many individuals who believe that this is just another camera malfunction, UFO hunters decided to investigate further and zoomed into the image captured from the video. There you can appreciate a cigar-shaped object that seems to fly next to the ISS.
‘It’s not a camera malfunction, we are looking at a another UFO, how long will NASA keep up with their silence?’ said another user on social networks.
‘What appeared to be a possible dust particle or meteor reveals itself to be a massive, cylinder-shaped craft,’ he claimed.
After YouTube user Secureteam10 posted the video, thousands of people rushed to see another ‘Alien craft’ fly next to the International Space Station. Commentors excitedly claimed ‘ here is the evidence everyone was looking for,’ ‘what else do you need?’
‘Looky looky,’ exclaimed one believer.
‘Right after that brief shot of that UFO NASA cuts the video, what a coincidence.’
‘That in my opinion is proof positive that they are hiding SOMETHING from us.’
Other posters casted doubt on the veracity of the sighting.
‘Nothing to see here, it’s probably just a space rock.’
‘It just looks long because that’s what happens with cameras and fast-moving objects.’