UFO Speeds Up When Seen Over Australia On Sept 2015, Video, UFO Sighting News. 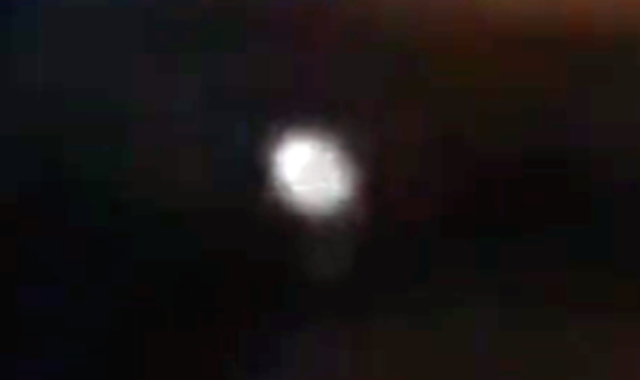 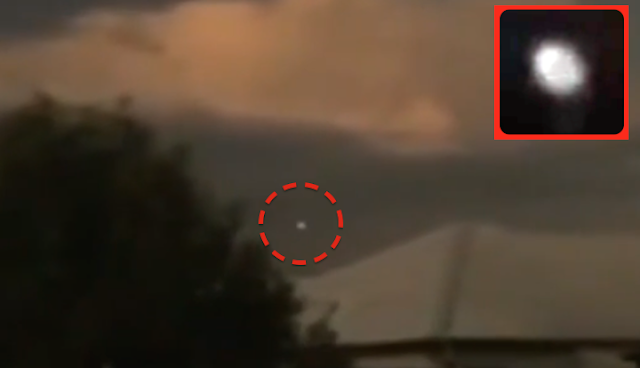 There is no way that this object is a meteor. Since when do meteors zig-zag, go left and right, up and down? I'm not sure what game that news station is playing, but I am sure there is a cover up going on. This news site is trying to downplay the truth, so the public will stay in the dark.
Scott C. Waring
www.ufosightingsdaily.com

News states:
A Sunshine Coast man has been left scratching his head after he spotted what he believes could be a UFO. Joshua Ross noticed the yellow glow in the sky, and recorded it on his mobile phone. “It was just going side to side up and down, round and round, it would go up one direction and then shoot back the other direction. And then it just disappeared under a tree and that was it,” he said.Astronomers say it was most likely a meteor, about the size of a fist. The hovering effect was due to the cloud cover. This isn't the first time something in the sky has had people guessing. The modern fascination with UFOs can be attributed to the infamous 'Roswell crash' and extra-terrestrial enthusiasts recently seized on new proof that we are not alone.

Admin
Posts : 90486
Join date : 2012-01-04
Location : Woodstock Nation
UFO Spotted in 1960 NASA Mercury Mission Photo
We have always wondered what kind of things astronauts see while they are in space. If it is true that Aliens exist and that UFO’s visit our planet, then astronauts have surely seen hundreds of these objects while in space. In today’s world, it isn’t a secret that many astronauts and cosmonauts have stated that their missions were followed closely by unidentified flying objects, and it is very likely that the first manned space program of the United States was closely monitored by ‘Aliens’ as ufologists suggest.  Is it possible that the image below is in fact evidence that Alien beings have kept a close eye on humans in our attempt to conquer space?
(via ewao.com )

According to many ufologists, this is one of the best images that supports their theory that extraterrestrials have watched over us for over a century.
UFOP hunter Scott Waring has found a 55-year old photo which belongs to NASA’s Mercury program which appears to show a Unidentified Flying Object stalking the Mercury Redstone 1A.

This spacecraft was launched in December 1960 and took the image of the mysterious UFO during a mission. The mission objectives of this unmanned suborbital flight were to qualify the spacecraft for space flight and qualify the system for an upcoming primate suborbital flight. The spacecraft tested its instrumentation, posigrade rockets, retro rockets and recovery system. The mission was completely successful.
What do you think we are seeing in this image? Is it an unidentified flying object of extraterrestrial origin like UFO hunter Scott Waring suggests?
Warring states the following:

“I found a disk in some photos of the Mercury mission. The mission took place in December of 1960, and why wouldn’t aliens be interested in watching a historical moment in human history?” Waring wrote on his blog.”
“Especially since the capsule was unmanned, there were no worries that they would be seen. It’s actually the Earth in the background and the UFO is in space observing the Mercury capsule,” Waring continued. “The disk is hard to make out in the first photo, but three photos later its easy to see. It looks like a classic disk with a wedge cut out of it. We are living in a remarkably era, when certain deep truths about the universe come within reach of the human spirit.”

Is this the ultimate proof that aliens are watching over us in space? According to many Ufologists it is, but the scientific community certainly needs more than a blurry image of an object in space to suggest intelligent Alien beings are looking over humans and our space programs. Certainly it isn’t the first image that shows mysterious object which seem to “shadow” man-made space vehicles. In the last couple of years, UFO sightings in space have increased exponentially. One of the best “tools” to look for alien vehicles in space are NASA’s very own cameras on board the International Space Station.

On the afternoon of April 8, 1665, several fishermen doing their jobs near Barhöfft, which at the time belonged to Sweden, now modern-day Germany reported the sighting of a Battle between ships in the heavens. Shortly after the battle had concluded, people witnessed a dark, disk-shaped object over flying the area where the battle had taken place.
(via ewao.com )

“The Mass UFO sighting that took place in 1665 was seen by hundreds of people who saw flying ships in the sky. “After a while out of the sky came a flat round form, like a plate, looking like the big hat of a man… Its color was that of the darkening moon, and it hovered right over the Church of St. Nicolai. There it remained stationary until the evening. The fishermen, worried to death, didn’t want to look further at the spectacle and buried their faces in their hands. On the following days, they fell sick with trembling all over and pain in head and limbs. Many scholarly people thought a lot about that,” wrote Erasmus Francisci in “Der wunder-reiche Ueberzug unserer Nider-Welt/Oder Erd-umgebende” in 1689.

Right: A 1680 engraving accompanying a description by Erasmus Francisci of a battle between ships in the sky said to take place in 1665. Background: Text and an image from “An Illustrated Description of the Miraculous Stralsund Air-wars and Ship-battles), 1665.
This wasn’t the first time that mass UFO sightings were reported. Remember the UFO Battle of 1561 over Nuremberg? It seems to coincide with the accounts of people from Barhöfft.  Hundreds of people witnessed strange flying objects in the sky with a technology foreign to our very own today. It is believed to be one of the best recorded Mass-Sightings in history.
Hundreds of years ago the little knowledge mankind had about star and planets was more connected with astrology than with science. Our understanding back then, was not expanded as it is today, where we know that there are thousands of Earth-like planets in the universe and that most of them have the ability to sustain life as we know it. Today we know almost for certain that there are other life forms that inhabit the universe, and it is very unlikely that we are the only intelligent species around. Hundreds of years ago, people probably never suspected that there could be extraterrestrial life elsewhere in the universe.

News notice (an early form of newspaper) printed on 14 April 1561 in Nuremberg, describing the celestial phenomenon that occurred over Nuremberg on the 4th of April 1561. From en:Wickiana collection, an important collection of news items from the 16th century.
Scientific explanations for the mass sighting at Barhöfft? Chris Aubeck and Martin Shough wrote about the mass UFO sightings over Barhöfft in the June 2015 edition of EdgeScience magazine while looking at several explanations for the phenomena witnessed by hundreds of people in 1665. After their analysis, researchers were able to scientifically exclude several celestial phenomena like the angle of the sun, producing an ice halo. But they went further and excluded the possibility that people witnessed a Mirage or Fata Morgana since a mirage would not explain some of the objects seen by witnesses, like the plate- or hat-shaped object that was said to remain into the evening. Researchers also excluded the possibility that people had witnessed a flock of birds in the sky since a flock would not explain the dark object that remained hovering in the sky until night fall.
An unusually large flock of starlings may have resembled such a scene, Aubeck and Shough said. Flocks sometimes merge together in startlingly well-defined masses that move in patterns before settling down.
What do you think people saw in 1665? Is it possible that this is another well-documented UFO sightings that occurred hundreds of years ago? And is it possible that people in Barhöfft saw what people over Nuremberg witnessed in 1561? These two cases are certainly two of the best documented UFO sightings in the history of mankind. So far, researchers have not been able to ‘debunk’  these mass UFO sightings.