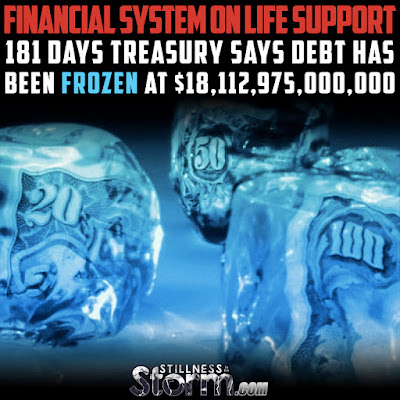 The financial system has been imploding in earnest since the economic crash of 2008. The only reason there hasn't been a huge fallout in the economic landscape is because of pandemic manipulation of various markets and processes.

For example, there are many homes in foreclosure in the US, but only a small fraction is actively being prosecuted by the banks. The reason for this is because when a home is foreclosed on, it either short sells or is sold at auction for a fraction of its original value. This lowers the prices of homes in the region because they are based on comparative value in the market place.

If all the potential cases were pushed through the foreclosure process the value of homes would plummet, which would in turn devalue the mortgage backed securities tied to them. This would destabilize the whole financial system in a matter of months.

Additionally, all five of the world's biggest banks have admitted to market rigging and manipulation.

And these are just a few examples of efforts hidden powers exert to keep the financial system a float.

The following article details one more point, that US Treasury Debt has been frozen since March of this year. What this means for the US Dollar and economy is essentially on life support, and unless a major change in the system occurs, it will only be a matter of time before it collapses.

While this may seem like a fearful development, it is actually the best opportunity to reveal the frauds of the past, so we can create a prosperous future. In truth, the vast majority of all debt is an elaborate fraud, and most especially the so-called National debt.

This fraud extends to every nation on the planet, as each is beholding to the defunct powers of the money masters. We need only seek the truth about these realities so as to empower ourselves in order to create a better way.

As Bill Still points out in his epic work, The Money Masters, the creation of currency as debt results in only one thing, the eventual enslavement of the people. Instead of allowing a foreign entity to print currency, we can do this ourselves, as has been done many times in the past. This means that printing money can be done without debt, and therefore the creative power of a people stays with them, oppose to being drained away in interest payments and income taxes.

A day will come when the frauds of our age are plain to see, and this will be the point where all our past research and knowledge comes to the fore to create a truly honest and fair system. Eventually as realities of interconnectedness are rediscovered, humanity will abandon the need for money entirely, as it embraces the abundance of cooperation and the empowering aspects of unity.

On July 30, Treasury Secretary Jacob Lew [url=http://www.treasury.gov/initiatives/Documents/Treasury Letter to Congress 073015.pdf]sent a letter to the leaders of Congress[/url] saying he was extending a “debt issuance suspension period” through October 30.

That means the Treasury believes it can continue for at least the next seven weeks to issue Daily Treasury Statements that show the federal debt subject to the limit beginning and ending each day frozen just below that limit.

“Beginning on Monday, March 16, the outstanding debt of the United States will be at the statutory limit,” Lew said in that letter. “In anticipation of reaching that date, Treasury has suspended until further notice the issue of State and Local Government Series securities, which count against the debt limit.”

On July 30, Lew sent another letter to the congressional leaders saying: “I have determined that a ‘debt issuance suspension,’ previously determined to last until July 30, 2015, will continue through October 30, 2015.”

In his March 13 letter, Lew explained some steps the Treasury would take during the debt issuance suspension period.

“Because Congress has not yet acted to raise the debt limit,” Lew said in that letter, “the Treasury Department will have to employ further extraordinary measures to continue to finance the government on a temporary basis. Therefore, beginning on March 16, I plan to declare a ‘debt issuance suspension period’ with respect to investment of the Civil Service Retirement and Disability Fund and also suspend the daily reinvestment of Treasury securities held by the Government Securities Investment Fund and the Federal Employees’ Retirement System Thrift Savings Plan.”

Lew informed Boehner that these same actions had been taken “during previous debt limit impasses.”

The Treasury has also posted Frequently Asked Question sheets that explain the actions the Treasury takes during a “debt issuance suspension period” and their statutory basis. The Congressional Research Service has also explained it.

“Under current law, if the Secretary of the Treasury determines that the issuance of obligations of the United States may not be made without exceeding the debt limit, a ‘debt issuance suspension period’ may be determined,” the Congressional Research Service said in [url=http://cnsnews.com/sites/default/files/documents/REACHING THE DEBT LIMIT-CRS-03-27-15.pdf]a report published on March 27[/url]. “This determination gives the Treasury the authority to suspend investments in the Civil Service Retirement and Disability Trust Fund, Postal Service Retiree Health Benefit Fund, and the Government Securities Investment Fund (G-Fund) of the Federal Thrift Savings Plan.

"The total federal debt consists of debt held by the public and intragovernmental debt," the CRS said in [url=http://cnsnews.com/sites/default/files/documents/OVERVIEW OF THE FEDERAL DEBT-CRS-05-11-11.pdf]another report published in 2011[/url]. "Debt owed to the public represents borrowing from entities other than the federal government, and includes borrowing from state and local governments, the Federal Reserve System, and foreign central banks, as well as private investors in the United States.

"Intragovernmental debt," said CRS, "consists in debt owed by one part of the federal government to another, which are mostly held in trust funds."