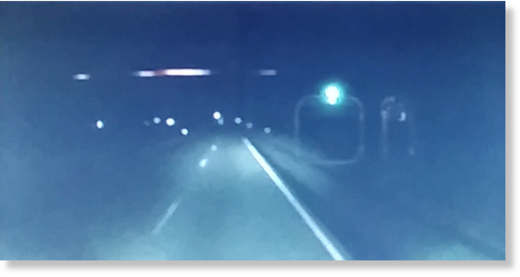 The bright green flash on the right is a possible meteor headed into the atmosphere.
County10.com reported last week on what the flash of light across Wyoming skies on the night of Saturday Sept. 26 , might have been. Now, a longtime Cody area astronomy buff has provided further context/answers:

"The observed flash was in fact a Bolide meteor, not an Iridium flash or reentering manmade space junk. I saw it plainly from my campsite 28 miles SSE of Tensleep / ~38 miles west of Kaycee on the upper Nowood River," said Dewey Vanderhoff in comments made to Reboot.

"The meteor occurred at 8h:26m :40s PM- MDT. It appeared just above the 'handle' of the Big Dipper between the 1st and 2nd principal stars, and descended rapidly straight down and a little obliquely to the right ( north) . It first appeared 32 ° high in the WNW at an azimuth 309° ( 39° north of due west) . The meteor lasted maybe 3-4 seconds , brightening the entire way. In the last third of the trajectory the meteor became an incandescent green , and exploded just above my relative horizon. There was no sound of concussion in the following 5 minutes or so, as sometimes can be heard."


Vanderhoff provided further context regarding these types of meteors:

"The object was most definitely a Bolide meteor. A bolide is merely a meteor that explodes , very brightly. If conditions are right and the meteor was relatively close , you can hear the sound of the explosion some minutes later. Meteors like this are usually travelling anywhere from 10,000 t0 50,000 mph and they flare then disintegrate many miles above ground."

It turns out these types of meteors aren't especially, well, special.

"Bolides are not rare. ANY meteor of any size that makes it all the way to the ground is rare, even though it is estimated that 150 tons of meteroids enter the Earth's atmosphere every day . Most of that is the size of grains of sand , or smaller."

Though Vanderhoff didn't get a photo of last Saturday night's meteor, he provided the main graphic as a "drawing based on a screen shot from [his] astronomy planetarium program." 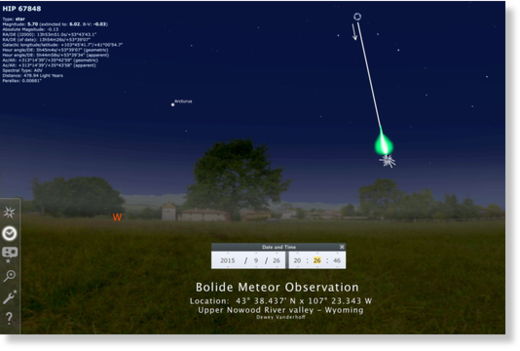 This blazing image of a bright orange trail was captured in the skies above Liverpool by an ECHO reader. 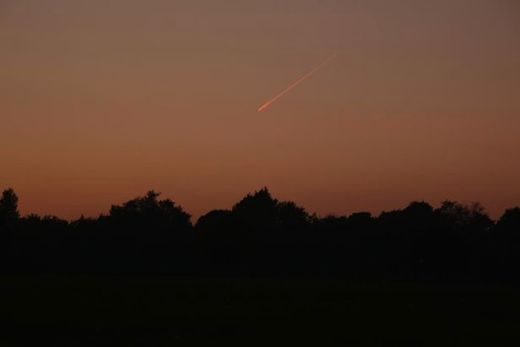 © Val Lovatt
Val Lovatt took the photos of the stunning sight over Newsham Park last Friday evening at about 6.30pm. She has now sent the images to the ECHO, thinking it might be a meteor. Others also spoke on social media about seeing a "meteor" in the evening sky.

The 57-year-old betting shop worker said: "I was made up with the pictures, it was just a case of being in the right place at the right time. "I was taking pictures on my camera in the park and had just been down to the lake taking photos." The ECHO asked Ken Clark, from the Liverpool Astronomical Society, to study the photographs in a bid to identify the glowing orange streak in the sky.

Val Lovatt took the photos of the stunning sight over Newsham Park last Friday evening at about 6.30pm. He concluded the fireball-like streak was in fact a trail left by an aeroplane which appears orange because of the sunset. Mr Clark said: "I've studied the images carefully and I'm afraid it's not a meteor but something commonly mistaken for one - a jet aircraft.

"The sun has set but the plane is still catching sunlight, hence the redness of the image, at such high altitude and the 'tail' is the exhaust vapour trail of the engines which are clearly in two lanes corresponding to the engine's positions on the aircraft. 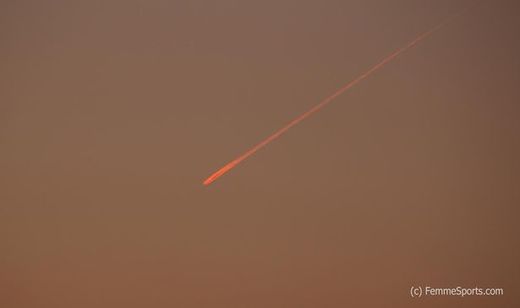 "Often people mistake such a sight as a comet too."

Comment: This was likely a meteor, not something caused by a jet. Just more damage control to prevent people from knowing about cyclic bombardments from space rocks.