The Shift Is Happening | The Shadow War Between the Banking Cabal & Global Alliance is Escalating on Mon Oct 19, 2015 1:27 pm 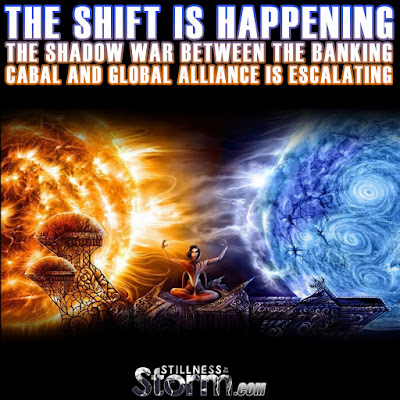 In my view, there is a cosmic initiation-taking place, wherein the products of our collective consciousness are manifesting outwardly so as to provide a self reflective experience for growth, internal healing and consciousness expansion.

This initiation includes all experiences, from the very dark and chaotic, to the harmonious and beautiful. If a painter wants to become better at their craft, then must they honor their own creations and gain skill by sifting through the missteps of the past. In a way, humanity is doing this right now on a unified global stage as the crimes and suffering of this world are becoming apparent for all to see and learn from.

The fraud and deception that runs rampant on Earth is a byproduct of humanities collective state of ignorance and lack of mastery. When a people forgets the interconnectedness of all things, when they loose touch with the holistic powers of creation inherent within personality, when they see their fellows as a means to an end instead of an aspect of themselves, then is the soil of consciousness ripe for tyranny and despotism. But we can reclaim these powers of sovereignty; giving us the tools to remake this world into the paradise it always had the potential to be.

This initiation into higher consciousness has been unfolding on the planet for millennia, as each event adds onto the next, slowly awakening the hearts and minds of all. Each truth that was once hidden, revealed to the whole, provides the foundation for growth and empowerment.

Related Part 3: 20 More Signs That The Global Elite’s Ship Is About To Sink

Ultimately our would-be masters need us to feel disempowered, traumatized and helpless in order for their plans to be successful, that there is no hope of changing the status quo because the task is too great. But in fact each individual that finds the courage to face the truth ceases to be a brick in the way of tyranny and now works to crumble the foundations of ignorance in others. In other words, each one of us has an immeasurable ability to effect positive change, but only if we face the truth about ourselves.

The world has always been changed by a small group of dedicated and active individuals, working in small unnoticeable ways that eventually culminate into a paradigm-shifting event. In this way, each act of kindness, compassion and honesty with others and ourselves is slowly building up the foundation for a truly sustainable and free society.

Don't loose heart because the shift hasn't happened yet, keep walking the path of truth and love in all ways, for they will eventually lead toward the freedom and harmony for all.

It’s been a wild couple of months in economics and geopolitics. We’ve seen chess moves that have changed the dynamics in global power for the positive of humanity, as well as those which are only barely maintaining the status structure.

It’s definitely reaching a do-or-die state of affairs for all involved.

As a contextual overview, there is a shadow war taking place. A western cabal, driven primarily by US and Israeli forces, have been in power for dozens of decades (you can read about it in depth here , as well as some but not all of the most powerful families here ).

Fortunately though, they are slowing losing grip on their monopoly of control.

There are many names for this power structure, including the deep state, cabal, globalists, elitists, banksters, Zionists and Illuminati , to name but a few. This elite cabal serve to destroy that which doesn’t align with their interests, which as you may have guessed is chaos.

In addition, they might still have a successful psy-op campaign on the masses which is inducing some people further into their coma, yet this is disintegrating fast as they no longer dictate the perspective of alternative thinkers. The reality is more and more truthseekers are breaking free.

They have so many names because they have so many fingers in so many pies, so it must be made clear that they’re the ones primarily controlling certain governmental action (including US national and foreign policy), the matrix-media and a high proportion of the global economic central and private banking systems.

They have many other layers and factions too. There are secret societies, corporate arms, patents on technological advances, legal mechanisms and political power, as well as a wealth of minions that blindly do their bidding.

If only these puppets realized that obeying their perceived masters is at the long-term expense of both themselves and their families, they would stand up and be counted as those who oppose the bloody take-over of our planet.

That leads to the main goal of the cabal; global governance. Once they solidify an overarching legal, social, psychological and even spiritual framework for the worlds people, then their power will be untouchable.


They will live on as ‘the men that united the world’, however the truth that wouldn’t reach the history books is that they desecrated, devalued and demonized so much of the cultural and natural wisdom that permeates humanity’s heart.

They are being challenged though. There are alliances that have formed between power brokers from both the West and East. This alliance, which I will call the Western-Eastern Development (WED), is the group engaged in a shadow war with the banksters .

The WEDs are a force of some Eastern power brokers, as well as many people and interest groups in the West who are opposed to the Zionist  and New World Order  agendas.

You can read a fantastic breakdown of some of their recent chess moves here  and here .

Of course the new occupation of Syria by the Russian and soon-to-arrive Chinese military is a direct ‘fuck you’ to the cabal.

After all, ISIS was funded and weaponized by them  to oust Assad so that economic and political control could be further instituted throughout the Middle East.

With a union formed there they hoped that the European and American unions, along with certain Eastern sell-outs, could combine for the successful implementation of a global governance.

Yet the tables appear to turning which is highly influenced by the energetic and consciousness shifts happening in our era. This may lead them to even more extreme measures, such as a [url=http://humansarefree.com/search/label/False Flags]false flag event[/url] which leads to WWIII with Russia , China, Iran and their affiliates.

On the other hand, their next move might be an orchestrated global economic meltdown so that agreements such as the TPP, TiSA and TTIP, as well as the UN’s ‘The 2030 Agenda’, could come into instant, dramatic and full-blown effect.

It must be recognized at this point that the UN was created by these shadow puppeteers  and that these trade agreements are designed as precursors to a one world government. For an objective critique of the trade agreements, read here , and for the UN agenda , read here .

Furthermore, the stories that the sleeping masses are told, and even our so-called leaders, are full of lies, manipulation and propaganda.

We cannot afford to fall for this as a society any longer, otherwise we will continue to be complicit in an agenda that serves to immortalize the blood lines of these mentally ill people, at the expense of human culture, livelihood, health and life itself.

Now of course no power structure is free of corruption and greed, so the WEDs will need appropriate investigation too. Ideally it would be great if they all just came clean and was transparent with the masses so we could work out a team plan.

But given the current players have shown what they’re truly worth, it's clear that they’re not the world leaders we need for an inclusive, honorable, healthy, progressive, equal and united global culture.

The vast majority of people just want love and peace. We need a progressive economy in which nobody slips through an intelligently and morally designed safety net.

The environment should be cared for in sustainable ways. We also need a value system that will encourage the true virtues to manifest including cooperating, rather than competing with each other.

Ultimately, the global power dance is in full swing. With a faltering global economy, geopolitical challenges, the WED alliance and the droves of truthseekers waking up, the ivory tower need a new plan.

If sense prevails, they’ll work with us to implement a transparent and truly just system for all of humanity’s future, however given their track record, its doubtful they’ll see the light.

About the author: Phillip J. Watt lives in Australia. He best identifies as a ‘self-help guide’. His written work deals with topics from ideology to society, as well as self-development. Follow him on Facebook  or visit his website .