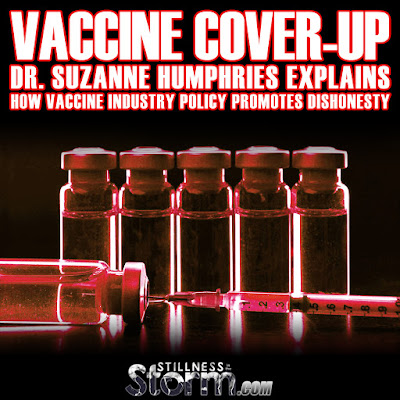 Vaccination is one of the more hot button issues within the awakening community. Cures for cancer and pandemic medical fraud seem to be easily recognized, yet there are many people on the awakening adventure that still contend vaccines are safe and effective.

There is a staggering amount of evidence that demonstrates vaccines are not only unhealthy but also completely ineffective as a means of reducing contagious disease. As it turns out, nature already provides the best way to gain immunity via probiotic foods and proper diet.

Related Health, Like Everything Else is Holistic - Not Allopathic | Like any ecosystem, our bodies host trillions of bacterial cells that affect our everyday health

The following list of related articles provides supportive evidence for disproving the validity of vaccination:

Dr. Susan Humphries is a medical doctor that recognized the fact that vaccines were causing more health problems then they ever hoped to fix. Many of her patients had healthy kidney function prior to receiving an injection, only to suffer serious renal problems after receiving a vaccine. When Humphries attempted to report these problems to the medical industry, they were completely ignored.

Conversely, when Humphries reported kidney reactions as a result of ingesting a drug, that drug was quickly taken off the market for investigation. Clearly there is a bias towards vaccines, wherein major side effects are ignored in favor of maintaining the status quo.

These accounts by Humphries are just some of the dubious and negligent practices hardwired into the medical system. The amount of human suffering and harm caused by an institution ostensibly founded on doing no harm, reveals how up-side-down modern society has become.

Thankfully there is a growing population of dedicated and active people willing to share these socially unacceptable truths. Eventually the truth will be widely accepted, but until then, our task is clear.

With the heightened media coverage on vaccination since the now infamous Disneyland measles outbreak, the whole country has been bombarded with the media blaming unvaccinated children for a total of 176 cases in a population of 320 million people.

The video series Vaccines - Honesty vs Policy with Suzanne Humphries, MD, is making quite an impression. Dr. Humphries graduated with a degree in physics before attending medical school at Temple University. She is a board-certified nephrologist, having spent 11 years in a conventional practice and then three years as a professor teaching nephrology at the University of Medicine and Dentistry in New Jersey. She is author of Dissolving Illusions: Disease, Vaccines and the Forgotten History. In the video series, she tackles some very important issues within the vaccine debate.

What are doctors taught in medical school about vaccines?

According to Dr. Suzanne Humphries: "We learn that vaccines need to be given on schedule. We are indoctrinated with the mantra that 'vaccines are safe and effective' -- neither of which is true. Doctors today are given extensive training on how to talk to 'hesitant' parents -- how to frighten them by vastly inflating the risks during natural infection... on the necessity of twisting parents' arms to conform, or fire them from their practices. Doctors are trained that nothing bad should be said about any vaccine, period."

When Dr. Susan Humphries sorts myth from reality for her viewers, the media does not respond with discussions about vaccines but instead attempts to discredit Dr. Humphries, calling her a homeopathic quack. This, Dr. Humphries states, is quite laughable since she in fact is not a homeopath and never has been. It is just the type of diversion and avoidance of the real issues that the media uses, much like the recent attacks on Dr. Oz. They try to make it personal rather than address the actual subject matter.

We are told that so many things are quackery, when in fact the things that the medical system calls quackery are what I now see helping the most. So I think the term quackery really needs to be redefined. Because in the time I have become a "quack," myself and my patients have become healthier than they ever were at the time when I was not a quack.

Dr. Humphries explains that using fear to stimulate the masses to get vaccines has been the industry's mode of operation for a long time. In addition to working on the element of fear, they use a lot of "misinformation" totally disregarding any validity of natural methods to combat disease and build up the immune system. There is more emphasis placed on training doctors how to "deal with parents" who question vaccination than there is on teaching them the actual science and composition of the vaccinations, according to Dr. Humphries.

Who controls what doctors are taught?

The pharmaceutical industry provides large contributions to medical schools and teaching hospitals, advertises in medical journals and funds the majority of research. These companies are paying the academic institutions and faculty and even the doctors who take the courses. The companies are simply buying access to medical school faculty and to doctors in training and practice. Worldwide, the vaccine market is approximately $30 billion. The U.S. claims two-thirds of that total, or $20 billion. So our primary education for doctors about vaccines is coming from those that have everything to gain by selling vaccines and nothing to lose.

This change in her stance on vaccinations began in 2009 when the H1N1 flu vaccine was being given as a separate injection from the seasonal flu vaccine. Many doctors were not on board with the influenza vaccination, and Dr. Humphries noted that many of her own hospital colleagues did not get the vaccine for themselves. During that flu season, three patients were hospitalized with total kidney shutdown. And the common statement made by each while she examined them was alarming: "I was fine until I had that vaccine." After examining the medical history of all three of these patients, she found that none had any previous kidney issues. All three had to have traumatic and extremely expensive dialysis; two eventually recovered but never fully returned to 100% kidney functioning, and one died of complications. After these cases, Dr. Humphries began making it part of her routine to include vaccine histories for her patients. "When was your last vaccine?" became one of her first questions as the correlations began mounting.

"Later, several patients were admitted with normal kidneys and had their health decline within 24 hours of vaccination," Dr. Humphries wrote in a bio. "Even these well-defined and documented cases were denied as vaccine induced by most of my colleagues. There was the rare doctor who would concur with me in the dark or the nurse who would come and thank me and agree with me while nobody was listening."

Once she had established a concern for vaccination of those in her care that already had weakened immunity or kidney-related issues, Dr. Humphries attempted to refuse vaccinations for her patients while they were in the hospital. She was met with huge opposition and told she could not change the hospital's vaccine protocol.

This was the first time in her career that her opinion regarding kidney failure was not respected. Any other time she suggested that a drug was responsible for kidney damage, that drug was immediately discontinued -- no questions asked. This happens routinely with certain blood pressure drugs, antibiotics, pain killers, etc. Sometimes, kidneys can react to drugs in an allergic fashion -- to any drug at any time -- and that drug would have been stopped. Some drugs can cause direct toxicity to the kidneys, and in the past if she suggested to stop or avoid them, they were always avoided. But Dr. Humphries was unable to protect her own kidney-failure patients from vaccinations given in the hospital.