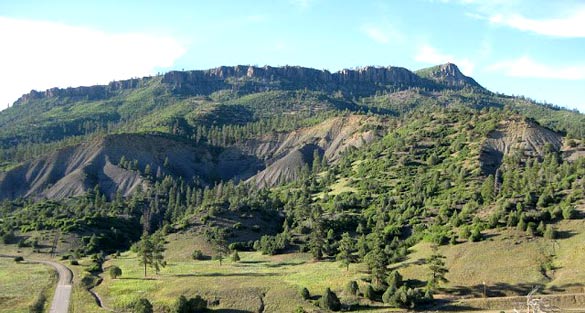 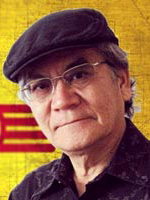 Norio Hayakawa
In 2007, I was so fortunate to get to know the Arden Tafoya (brother of Hollywood actor, Alan Tafoya) family who lives in the northwest area of the town.  I had gotten to know Arden while I was attending the UFO symposium in Aztec that year.  During my three days of stay in Dulce at that time, I obtained many new, fascinating sighting reports from many locals again, particularly from the family that I just mentioned and their relatives.
On my second day of stay in Dulce, this family invited me to their residence for a great meal.  They had also invited their relatives who were willing to describe to me in detail many strange experiences they have had and even are having now.
It was assuring to know that the family that I befriended were immediate relatives of high officials of the Jicarilla Apache tribe. 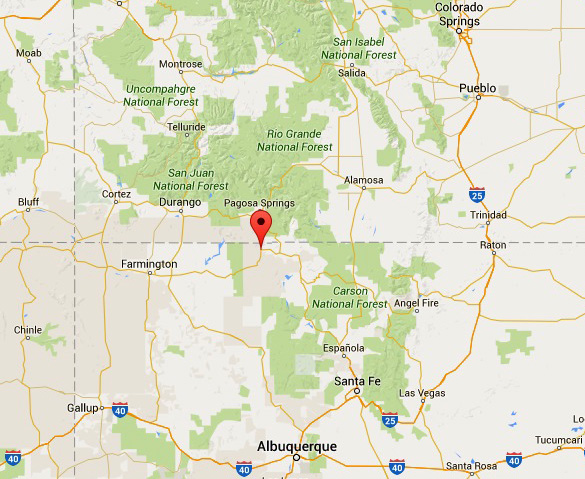 Red marker shows the location of Dulce, New Mexico. (Credit: Google Maps)
Arden was one of the sons of the late Raleigh Tafoya, a highly respected, long-time Police Chief of Dulce (way before Hoyt Velarde, who later became the director of Public Safety and who detained us in 1990 when I brought a Japanese TV crew to Dulce).  Arden’s wife was an immediate family of the head of the Jicarilla Apache tribal council at that time.  His sister-in-law had been a Dulce Police dispatcher.
My friend’s wife told me of an incident whereby a huge, silent delta-shaped dark object emitting extremely bright lights slowly passed over a group of 50 to 75 people (all their relatives) on a mesa where they were celebrating a traditional Jicarilla Apache feast called the “coming out” feast, a celebration for young boys and girls (similar to the Spanish quinceanera celebration). 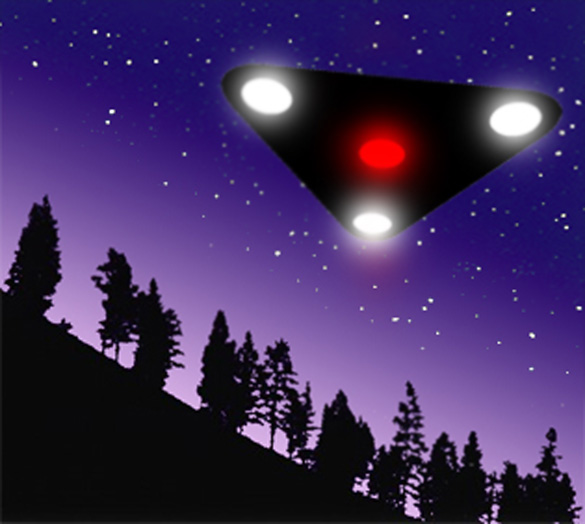 Artist’s rendering of a black triangle UFO. (Credit: SkeezerPumba/Wikimedia Commons)
The huge object appeared after sundown, an hour or so after their traditional meals had ended and after the shamans had completed their chantings and dances.
They were simply stunned to see the huge triangular  ‘craft’  hovering only about 200 feet or so above the campground.
The entire area lit up like daylight.
What was more amazing was that after a few minutes of hovering over the area, it suddenly took off with a tremendous gust of wind.  Pots and pans were flying all over.
Some of the people were almost thrown off their vehicles. Fortunately, no one was injured, but panic spread.
The generators failed to re-start and all battery-operated appliances malfunctioned, including the car radios.
Another incident they recounted was a daytime sighting of a silver, saucer-shaped object at around 11 a.m., which hovered for 30 minutes right next to Hwy 537, not too far from the junction of U.S. 64, north of La Jara Lake.
One relative also recounted an unforgettable sighting of a huge, flying “triangle” near Hwy 537, near J-30 (Jicarilla Road, No. 30), with some type of a “cloaking device” that almost appeared to have a transparent body.
The object was described to have been close to half-a-mile in length (at least from their visual perception). 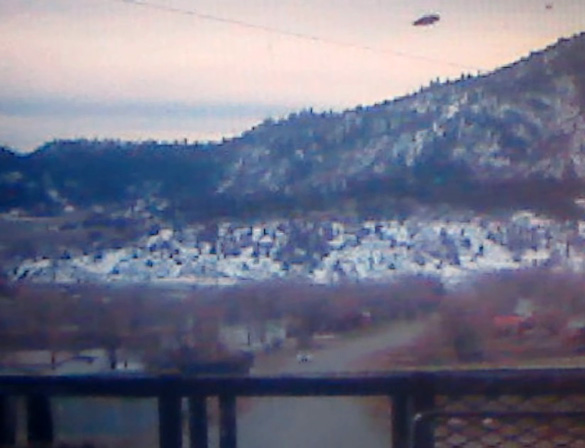 UFO photo taken by Dory Vigil in Dulce, New Mexico. See video below. (Credit: Dory Vigil)
The biggest and most impressive sighting, however, took place in May of 2004 when several families were celebrating together the feast on a Jicarilla Apache campground, located at an area near J-33 and J-40, right near the Continental Divide.
Incredibly, it involved many brilliant objects in the night sky (not just one or two objects).
It literally filled up the entire sky, according to the testimony of the former Dulce police dispatcher.
There were close to 100 witnesses to this incredible incident.
They objects moved en masse slowly from one end of the sky to the other.
It was literally an “armada” of UFOs  (which exactly reminded me of the famous, well-documented 1950 mass sightings of UFOs over Farmington, near the Four Corners area of New Mexico).
What was particularly fascinating about this sighting was that everyone also saw a small fleet of military helicopters which seemed to follow the objects.
Again, car radios went dead all through the sighting.
An interesting point is that many of the appearances of UFOs seem to coincide with various feasts taking place in the Jicarilla Apache reservation.
Were ‘they’ attracted to the Jicarilla feasts?
Last but not the least of the impressive Dulce sightings involved a Jicarilla Apache Forest Service ranger who witnessed a ‘craft’ of some kind enter the east side of the Archuleta Mesa through several large rocks that appeared to open (almost like a door) and in went the craft into the side of the mesa. 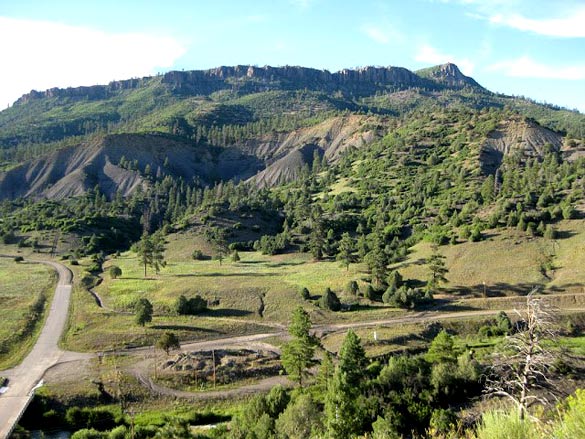 Archuleta Mesa (Credit: Norio Hayakawa)
He excitedly reported this sighting live on his microphone while he was communicating on his radio with the Forest Service station across the south side of Dulce.
The ranger was stationed at the top of the Archuleta Mesa in the look-out building next to the radio communications tower.
This took place a few years after a big fire destroyed many of the trees on and around the mesa.
What is still strange about the aftermath of the fire, which they say (happened about 18 years ago),  is the fact that all attempts for the re-forestation have so far failed on and around the Archuleta Mesa.
The trees just don’t seem to grow for some strange reason or other.
What is my conclusion to all these recent sightings in Dulce?
These were all first-hand eyewitnesses to the events.
Without doubt, I cannot help but believe that they all saw what they described to have seen. What it was that they actually saw is the question I cannot answer.
There is no other logical explanation.
Please also see two YouTube videos:
A flying saucer incident in Dulce, New Mexico in the late 1960s (testimony from Darren Vigil Gray, Santa Fe artist).


Reposted with permission from Norio Hayakawa’s Civilian Intelligence News Service. You can find the original post at noriohayakawa.wordpress.com .