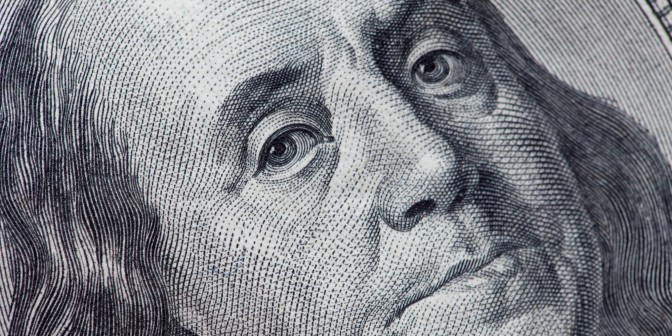 Written by Cassius Methyl
(Era of Wisdom) What you might have learned about Benjamin Franklin in public school was probably not very descriptive or insightful.
Franklin was a very colorful man. From what I have gathered so far, he seems to like astrology the best, out of all the occult subjects he enthusiastically studied. To barely scratch the surface of the surface of this man’s personality and life, this article will briefly examine Franklin’s “Poor Richard’s Almanack,” and hopefully it will inspire you to learn more.
For about 25 years, 1733- 1758, Benjamin Franklin published his “Poor Richard’s Almanack,” described by Wikipedia-
“Poor Richard’s Almanack (sometimes Almanac) was a yearly almanac published by Benjamin Franklin , who adopted the pseudonym of “Poor Richard” or “Richard Saunders” for this purpose. The publication appeared continually from 1732 to 1758. It was a best seller for a pamphlet published in the American colonies; print runs reached 10,000 per year.
Franklin, the American inventor , statesman , and publisher , achieved success with Poor Richard’s Almanack. Almanacks were very popular books in colonial America , offering a mixture of seasonal weather forecasts, practical household hints, puzzles, and other amusements. Poor Richard’s Almanack was also popular for its extensive use of wordplay , and some of the witty phrases coined in the work survive in the contemporary American vernacular .”
Those “weather forecasts” were, in reality, profound and extremely far out writings on astrology and other such things.
His first almanac in 1733 kicked off with a bang; it predicted the exact time that a man would die. Franklin used astrology to boldly proclaim that a man named Titan Leeds would die on “the 17th of October, 1733, 3 h. 29 m.” In the next year’s almanac, he proclaimed that he was correct; kind of.
He claims that him and Leeds were both trying to predict the time of his death with astrology, and they debated on which time would be correct.

From the 1734 almanac, his second one- “In the Preface to my last Almanack, I foretold the Death of my dear old Friend and Fellow-Student, the learned and ingenious Mr. Titan Leeds, which was to be on the 17th of October, 1733, 3 h. 29 m.
P.M. at the very Instant of the xxx of xxx and xxx. By his own Calculation he was to survive till the 26th of the same Month, and expire in the Time of the Eclipse, near 11 a clock, A.M. At which of these Times he died, or whether he be really yet dead, I cannot at this present Writing positively assure my Readers; forasmuch as a Disorder in my own Family demanded my Presence, and would not permit me as I had intended, to be with him in his last Moments, to receive his last Embrace, to close his Eyes, and do the Duty of a Friend in performing the last Offices to the Departed. Therefore it is that I cannot positively affirm whether he be dead or not; for the Stars only show to the Skilful, what will happen in the natural and universal Chain of Causes and Effects; but ’tis well known, that the Events which would otherwise certainly happen at certain Times in the Course of Nature, are sometimes set aside or postpon’d for wise and good Reasons, by the immediate particular Dispositions of Providence; which particular Dispositions the Stars can by no Means discover or foreshow.”
Poor Richard’s Almanack was quite a far out and unconventional publication.
Some critics observe that Franklin focused more on the “way things are now,” rather than laying out a structure or template for how things “could be.” Franklin’s peers are said to have focused their writing efforts on the future more than observing the present.
Many enjoyed his astrology forecasts and other musings, includes the likes of Napoleon Bonaparte .
Critics of the almanac complain that it is “inextricably linked with Franklin’s character.” This complaint could actually bring us to an interesting philosophical point; do you like your publications “fair and unbalanced”, with very little bias and mostly fact, or do you like it from an individual’s perspective as a person? It would of course depend on other circumstances like what is the publication, is it news, is it astrology, but still there’s an interesting grain of philosophy here.

Back in the days of the 1700’s, apparently people reported news from their philosophical convictions with no attempt to hide biases; newspapers and publications were honestly, outwardly biased, presenting their cases like people in a debate. “Biased” is a word with kind of a negative connotation; I think this concept of reporting news from a bias is great, but a precisely laid out and defined bias, like a debate.
This was highlighted in James Corbett’s podcast, “The Myth of Journalistic Objectivity.”
It clears a person’s mind to learn this, to read this today; it puts our modern ways of thought in an almost comforting perspective, to learn about the real actions and words of a person like Franklin. Some pieces of history are darker than others; comforting or not, its surely insightful and perhaps it can clear your mind and put things in perspective.
Isn’t it insightful to learn about a person like this? The same dominant forces of human consciousness, the mind, the same criticisms and possible exaggerations, flaws and strengths of a man in 1734 parallel the problems and strengths of men and women now.
As with many things in life, you have to really read the thing for yourself to grasp the full truth; so  take a look, you can read every single almanac in a PDF at this link . Read it for yourself, and please share this with as many people as possible.
Originally posted @ Era of Wisdom