OUT OF MIND » THE INSANITY OF REALITY » GLOBAL FINANCIAL COLLAPSE » Harbingers Of Financial Collapse Have Begun To Flash Red!

Harbingers Of Financial Collapse Have Begun To Flash Red!

So many of the exact same patterns that we witnessed just before the stock market crash of 2008 are playing out once again right before our eyes.
Most of the time, a stock market crash doesn’t just come out of nowhere. Normally there are specific leading indicators that we can look for that will tell us if major trouble is on the horizon.

One of these leading indicators is the junk bond market. Right now, a closely watched high yield bond ETF known as JNK is sitting at 35.77. If it falls below 35, that will be a major red flag, and it will be the first time that it has done so since 2009. As you can see from the chart above, JNK started crashing in June and July of 2008 – well before equities started crashing later that year. A crash in junk bonds almost always precedes a major crash in stocks, and so this is something that I am watching carefully.
And there is a reason why junk bonds are crashing. In 2015 we have seen the most corporate bond downgrades since the last financial crisis, and corporate debt defaults are absolutely skyrocketing. The following comes from a recent piece by Porter Stansberry…

So far this year, nearly 300 U.S. corporations have seen their bonds downgraded. That’s the most downgrades per year since the financial crisis of 2008-2009. The year isn’t over yet. Neither are the downgrades. More worrisome, the 12-month default rate on high-yield corporate debt has doubled this year. This suggests we are well into the next major debt-default cycle.

Crude oil was down nearly 3% in morning trade on Wednesday.
West Texas Intermediate crude oil futures in New York dropped to as low as $42.97 per barrel. Futures touched a $42-handle in the last week of October, but last traded near those levels for a considerable period in August.

Another thing that I am watching is the ongoing crash of other industrial commodities. This is something that also preceded the stock market crash of 2008 , and it is a clear sign that global economic activity is really slowing down.
Prices for industrial commodities such as aluminum, tin, iron ore and coal are all crashing. But the commodity that has me most alarmed personally is copper.
Economists commonly refer to it as “Dr. Copper”, and there is a very good reason for that. Looking back over history, the price of copper often makes a significant move in one direction or the other before the overall economy does. And the price of copper almost always starts declining before stocks do.
As I write this, the price of copper has fallen to $2.21, and it is already lower than at any point since the last financial crisis. To get a better perspective regarding what I am talking about, just check out this chart. 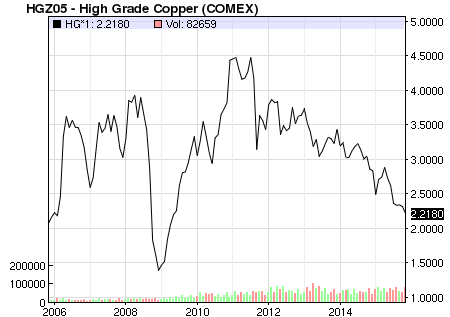 This is one signal that is absolutely screaming that a major financial crisis is imminent.

One more harbinger of financial doom on the horizon is the surging U.S. dollar. The U.S. dollar surged just before the financial crisis of 2008, and now it is happening again.
Most Americans don’t understand this, but the truth is that a rising U.S. dollar puts an incredible amount of stress on emerging markets all around the globe. Since the last financial crisis, many of these emerging markets have been on a massive debt binge, and much of that debt was denominated in U.S. dollars.
Now that the dollar has increased in value, emerging market borrowers are finding that it takes much more of their own local currencies to service and pay back those debts. Defaults are rapidly rising, and emerging market economies all over the world (such as Brazil) have already plunged into recession. [The Destruction Of Brazil ~ Agenda 21: Bye Bye Brazil ~ Obama Hedged & Built This.]
If the Fed does follow through with an interest rate hike in December, that is going to make things even worse. The U.S. dollar will surge even more, and emerging markets will be in even more trouble.

Police Get Surrounded By Pissed Off European Citizens.
At the same time that the dollar is getting stronger, the euro is getting weaker. An article that was posted by CNBC on Wednesday went so far as to state that

Let’s see, who has been warning that this would happen for more than a year? Here are just a few examples…
July 19th : “For a long time, I have been repeating my prediction that the euro would fall to parity with the U.S. dollar.”
June 28th : “As I have warned repeatedly, the euro is heading for parity with the U.S. dollar, and at some point it will drop below parity.”
May 25th : “As I have warned so many times before, the euro is headed for parity with the U.S. dollar, and then it is going to go below parity.”
In August 2014, just a little bit over a year ago, the EUR/USD was sitting above 1.30. At that time very few people out there would have ever imagined we would be talking about parity just a little more than a year later.
This is just the beginning of a time of great financial volatility. The things that we are going to witness in the months and years to come are going to be absolutely unprecedented. A massive global debt super-cycle is coming to an end, and the pain that this is going to mean for the global economy is almost too great to put into words.
The Economics Collapse

OUT OF MIND » THE INSANITY OF REALITY » GLOBAL FINANCIAL COLLAPSE » Harbingers Of Financial Collapse Have Begun To Flash Red!