OUT OF MIND » PERCEPTUAL AWARENESS » THE SHIFT IN CONSCIOUSNESS » Wake Up! by Wes Annac

Wake Up! by Wes Annac 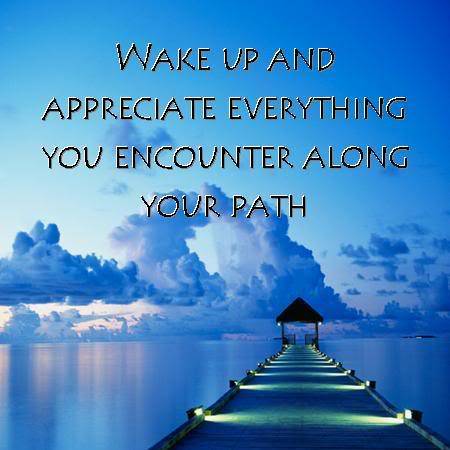 Credit: pennys-world.angelfire.com
By Wes Annac, Culture of Awareness
I’d like to share some thoughts on the concept of a spiritual awakening for those who are confused about it.
We hear a lot in the conscious community about waking up, being a part of the awakening, etc., and like other concepts, it can be difficult to understand what it actually means; especially if you interpret it literally.
As you can probably guess, the term’s purpose isn’t to encourage people to physically awaken. It holds powerful metaphorical significance, however, because spiritual awakening can be likened to waking up in the morning.
Whereas there was only darkness, unconsciousness and maybe some dreams when we were asleep, we awaken to a reality filled with color and potential. We can have all kinds of adventures in this reality, but sadly, most people do the same unfulfilling things day in and day out.
Spiritual awakening is similar in that we become aware of a new reality with even more color and vibrancy (not to mention bliss), and most of us are inspired to share our awakening with anyone who’s willing to hear us out. Credit: pinterest.com
I think spiritual awakening also constitutes increased physical activity, which might seem like a contradiction since spirituality is commonly associated with meditation, stillness and a general lack of physical activity.
Awakened people don’t have to be idle, and in fact, some are motivated to be more active than they ever expected.
They’re inspired to work hard and help humanity prosper (or just share some good vibes with the world), and they wouldn’t be active if it weren’t for their awakening. Physical and spiritual awakening do actually seem similar when considered in this light, because in both cases, we wake up from a dream and become more active.
I credit spirituality for almost everything I do, and I wouldn’t feel the least bit inspired if I didn’t have it. I was never inspired to contribute anything to the world until I ‘woke up’, and now, I’m inspired to write, create music, exercise; get out to nature; the list goes on.
Some people are inspired to exercise and eat healthier when they realize these things can enhance their exposure to a higher vibration, and some are inspired to use their preferred creative outlet to spread the word and bring others on board.
I never thought that exercise or creativity were spiritually significant until I discovered my own authentic spirituality, and now, I see why they’re so important and helpful.
Overall, to be ‘awake’ is to be aware of (and care about) things that have to do with spirituality and some people throw in other relevant issues like protecting the planet. This is relevant because of the idea that we’re one with the earth and it’s crucial that we protect and become closer with it. Credit: pinterest.com
The interesting thing about spiritual awakening is that it isn’t confined to alternative spirituality. I’ve heard Christians talk about being ‘awakened’ to the love of God, and when someone experiences a spiritual awakening in any form, they have a sense of being alive and revitalized.
They feel better than ever, and they have their newfound faith to thank for it.
It’s easy to judge a Christian or Catholic because of the oppression modern religion is famous for, but some of them have experienced a genuine spiritual awakening. They’re more interested improving the world than judging the non-religious or anyone who thinks differently.
Like many followers of alternative spirituality, they just want to share their love with a world that they know is deeply troubled. Some of them feel that their religion is the key to healing the world (even though they don’t push it on others), and their only goal is to make things better.
Most people who are on a mission have experienced a spiritual awakening and are inspired to contribute to humanity’s evolution, and if you consider yourself ‘awake’, my best advice is to do something with your awakening.
Now that your eyes are open and your feet have hit the floor, live courageously until the end of the day when you can rest and recuperate for the next day.
If you feel that you’re on a mission, staying active (along with taking time for rest and meditation) is the best thing you can do. Since you’re already awake, all you need to do now is start moving.

Thanks to Wes at: http://cultureofawareness.com

OUT OF MIND » PERCEPTUAL AWARENESS » THE SHIFT IN CONSCIOUSNESS » Wake Up! by Wes Annac