OUT OF MIND » DISCLOSURE » HISTORIES MYSTERIES » The 223 Nubian Pyramids 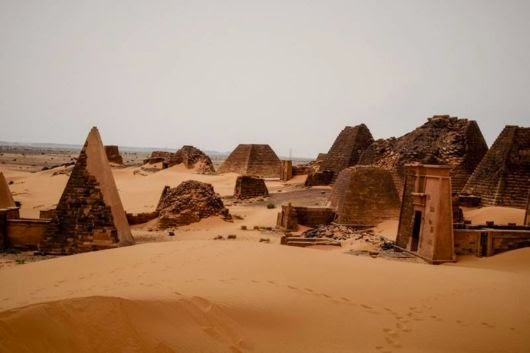 Still, there are 223 pyramids in ancient Nubia, roughly double the amount of pyramids in Egypt.

However, they are small in size; skeptics could argue it is quantity, rather than quality. Nevertheless, the 20th century British writer Basil Davidson described Meroë, one location in which a huge concentration of Nubian pyramids is located, as one of the largest archaeological sites in the world.

Unfortunately, all the tombs at Meroë have been plundered, most infamously by Italian explorer Giuseppe Ferlini (1800-1870) who smashed the tops off 40 pyramids in a quest for treasure in 1834.

Ferlini tried to sell the treasure of Queen Amanishakheto’s pyramid (involving exquisite gold amulets, signet rings and necklaces) when he returned to Europe. Collectors did not believe that such a treasure could come from black Africa; they thought he was trying to pass off fakes.

Indeed, they were jewels of great quality and beauty and often influenced by Greek art; customers didn't expect to find deep in the heart of Africa depictions resembling those of Egyptian or classical Greek art.

Still, Ferlini found only one cache of gold and it is unsurprising that he is not too fondly remembered in Sudan today.

There were three Kushite kingdoms:

Originally influenced by their northern neighbors, eventually, the Nubians were even able to invade, conquer and unify Egypt, when the king of Napata ruled as a Pharaoh of the 25th Dynasty, a rule that ended with the Assyrian conquest in 656 BC.

Though the Nubian kingdoms must have been aware of the pyramids that lined the Nile valley further north, it was only during their domination of Egypt that the royal sites of Napata and its successor Meroë became associated with any pyramidal activity in Nubia itself. That the Nubian kings definitely saw the Egyptian monuments is known from an account of Pharaoh Piye.

After taking control of most of Egypt, Piye set out for Heliopolis to worship the sun god and celebrate his coronation as king of Egypt, before returning to Napata.

The first series of Nubian pyramids were built at the site of el-Kurru and included the tombs of King Kashta and his son Piye (Piankhi), together with Piye’s successors Shabaka, Shabataka and Tanwetamani, and 14 queens’ pyramids.

The Napatan pyramids were sited at Nuri, on the west bank of the Nile in Upper Nubia. This necropolis was the burial place of 21 kings and 52 queens and princes. The oldest and largest pyramid at Nuri is that of the Napatan king and 25th Dynasty Pharaoh Taharqa.

But the most extensive and best known Nubian pyramid site is at Meroë, which is located between the fifth and sixth cataracts of the Nile, approximately 100 kilometers north of Khartoum, the modern capital of Sudan. During the Meroitic period, over forty kings and queens were buried in that pyramid field.

The Nubian pyramids differ from the Egyptian edifices: they are built of stepped courses of horizontally positioned stone blocks and range from approximately six to thirty meters in height; they are, to all intents and purposes, rather unimpressive.

What makes them impressive is the sheer quantity of them that was cramped in a small area.

What makes them a sad archaeological site is that all were plundered in ancient times, but wall reliefs preserved in the tomb chapels reveal that their royal occupants were mummified, covered with jewellery and laid to rest in wooden mummy cases, revealing that these Nubian pyramids definitely seem to have been tombs.

El-Kurru, about 13 km south from Gebel Barkal, was excavated by G. Reisner in 1918-19. The site includes, as mentioned, the pyramid of Piankhi, which has a base length of about eight meters and a slope of probably about 68 degrees – much steeper than the 51 degrees of the Great Pyramid – though eight meters is, of course, miniscule compared to the floor plan of the Great Pyramid.

It was the largest pyramid ever built at Nuri, and is unique among the Nubian pyramids in having been built in two stages. The first pyramid was encased in smooth sandstone.

Drawings and written reports of the early 19th century reveal the truncated top of the inner pyramid projecting from the top of the decaying outer pyramid.

The outer pyramid was the first of a type with stepped courses and planed corners. It had a sloped angle of about 69 degrees. An enclosure wall tightly encircled the pyramid, but Reisner was not able to unearth any traces of a chapel.

Inside, Reisner found a stairway of 19 steps that opened to the east and that led to the burial chamber. Piankhi’s body had been placed on a bed that rested in the middle of the chamber on a stone bench.

The bench’s four corners had been cut away to receive the legs of the bed, so that the bed platform lay directly on the bench.

This is conclusive proof that these pyramids were tombs, but it is in the pyramid of Nuri that is the most elaborate structure.

King Taharqa was the first to build in this location and his pyramid is, by Nubian standards, impressive: 51.75 meters square and between 40 to 50 meters high.

The entrance was by an eastern stairway trench, north of the pyramid’s central axis, reflecting the alignment of the original smaller pyramid.

Three steps led to a doorway, with a molded frame, which opened to a tunnel, widened and heightened into an antechamber that had a barrel-vaulted ceiling.

Six massive pillars carved from the natural rock divided the burial chamber into two side aisles and a central nave, each with a barrel-vaulted ceiling. The entire chamber was surrounded by a moat-like corridor, with steps leading down from in front of the antechamber doorway.

The Nuri pyramids were generally much larger than those at el-Kurru, reaching heights of twenty to thirty meters. The last king to be buried at Nuri died in about 308 BC, before construction began in Meroë.

It remained the royal cemetery for 600 years, until 350 AD. As at Nuri, the pyramids were stepped and built on a plinth, but now each triangular face was framed by smooth bands of raised masonry along the wedges, where the sides met.

The Nubian Pyramid Age is far more recent than the Egyptian exercise. And that is what makes the endeavor intriguing.

But, perhaps unlike Egypt, it was also directly linked with the Nubian economy. As Roman wealth declined, there was less demand for Meroë's luxury goods.

At the same time, Meroë's Red Sea trade to the Indian Ocean was lost to her better placed neighbor, the Ethiopian kingdom of Aksum.

In about 350 AD, the army of the Aksumite King Ezana invaded the island of Meroë. By then the capital had already been abandoned and the region was in the hands of a people whom the Aksumites referred to as the Noba.

As such, in 350 AD, the Pyramid Age along the Nile truly ended. The pyramid adventure of the Nubian kings seems to have been a method to integrate their nation with the Egyptians, who themselves had, by 600 BC, long abandoned pyramid building.

The Nubian pyramids were clearly tombs, but is that all they were? The answer is no.

The pyramids were, as in Egypt, just one aspect of a larger whole, in which the Nubian kings apparently rekindled ancient Egypt’s flame.

The key seems to have been – once again – the involvement of the Heliopolitan priests, the men that have been commonly identified as those behind the original Pyramid Age.

In a generalized way, we could state that pyramid building was a particular preoccupation of the Heliopolitan priesthood; temples were the main bailiwick of the Amunite priesthood, who had risen to the forefront of Ancient Egypt during the Middle and New Kingdom, when the capital had moved to Thebes/ Luxor.

It seems that with the Nubian invasion – which had largely only been possible because of the demise in power of Thebes/ Luxor – the Heliopolitan priesthood was once again on the rise.

Excavations at many Napatan sanctuaries, especially at Gebel Barkal, have revealed that the temples were generally built directly over the foundations of ruined New Kingdom (read: Amunite) temples.

About 1450 BCE, the Egyptian pharaoh Thutmose III had extended his conquests to Gebel Barkal and established it as the southern border of his empire.

The city he founded there was called Napata. The Egyptians remained only about 300 years.

The temple at Gebel Barkal was first excavated between February and April 1916 by George Reisner and his Boston team and again between March and April 1987 by the new Boston team led by Timothy Kendall. In 1989 Kendall and his staff resurveyed the monument.

Their conclusion was that the Napatan rulers deliberately restored religious sites that had been abandoned by the Egyptian pharaohs when they evacuated Nubia some three centuries before.

The Nubian kings used “Amunite temples”, but converted them to Heliopolitan sun worship. But they did not totally abandon the Amunite beliefs; after all, these Nubian temples had been built according to strict Amunite guidelines, and therefore would include features specific to that cult.

By restoring the old Egyptian cult places, especially Gebel Barkal, the Nubian kings were able to present themselves both within Nubia and especially at Thebes as the true successors of the pharaohs of the New Kingdom and the direct heirs to their throne.

Taharqa was not only the one who created the most elaborate pyramid, he also transformed the Barkal site into the stage for the celebration of past, present and eternal monarchy, and the perpetual recreation of the world.

The second explanation is religious. The sacred mountain Barkal (Barkal is Arabic, meaning both "holy" and "pure") measures 74 meters, is made from sandstone and has a flat top. Seen from the west, it looks like the royal Egyptian ureaus, topped by the white crown.

For the ancient Egyptians, the site must have been considered as the Creator God himself having sculpted the mountain, indicating it should become a royal, sacred location. From the east, it looks like the serpent with the sun disc on its top.


The interplay of the tomb and the mountain thus symbolized creation, death and rebirth simultaneously and Gebel Barkal, under Taharqa, was designed to be the ultimate and permanent centre of kingship in the Nile Valley.

We therefore find that in Nubia, the pyramid and the sites on which they were built contained far more symbolism than merely a funerary aspect – the sites were directly linked with kingship.

OUT OF MIND » DISCLOSURE » HISTORIES MYSTERIES » The 223 Nubian Pyramids