Posts : 8256
Join date : 2012-10-03
Age : 52
Location : Australia
Over at survivethewild.net  we’re all about taking the 9-5 prepper who is getting started prepping in their spare time, and transforming them into a survival junkie. Which is why we’re honored to be here with you on the American Prepper Network! We love this site and the amazingly valuable articles, so it is beyond a privilege to have some time with y’all.
Now let’s make some booby traps!
We’re not talking about pulling a lever and some looney toons style chute opens up to whisk your annoying neighbors away (although, if amazon sold those I’m pretty sure I’d have one at every door). We are going to go over practical ways to booby trap your house to add another level of safety.
Again, let’s bear in mind that we are not going to have elaborate chutes and ladders set up. These are going to be very accessible ways to protect your home. We’re not looking for ways to “eliminate” the enemy, just hinder them physically and mentally. And for someone who’s just getting started and doesn’t have much time or resources, this will be a great first step.
We’re going to break this into steps so it’ll be easier to follow

What Are You Defending, & What Are Your Space Restraints
It only makes sense to justify what you’re about to spend time and money on to defend. If it’s a double wide trailer with a limited edition Nascar table set you might as well leave your doors unlocked all the time. However if there’s a secret cache of weapons and resources under said Nascar table set, then you have a good reason to take some precautions in protecting your stuff.
Don’t make the mistake of having these traps just because they’re something cool.
If you’re dedicating the time and resources to make these things happen then make sure you’re protecting something that will last and be of value later.
Next you need to measure the space you’re working with to set up a booby trap. This should be as easy as getting a tape measure and measuring the dimensions of the rooms leading into the danger zone. Make sure there are ways to set up trip lines, hang things from the ceiling and any other restraints, but we’ll get into more detail about the traps later.
For now just get accurate measurements of the space you’re working with.
In the end booby traps will most likely be used to slow an intruder down long enough for you to get to something that can help you, whether that something has bullets or a cellular connection is up to you.
The booby trap won’t incapacitate an intruder; rather they will inflict enough damage to make them think twice about moving forward. That’s the magic of a booby trap, it usually only takes one! Imagine you go to walk through a door and you get shocked to death from touching the wrong thing, you’re going to be paranoid of EVERYTHING after that and moving much slower and cautiously!
Make Sure The Traps Can Be Safely Removed Or disarmed With Ease
For God’s sake, please don’t set these things up and forget they’re there when you ask someone to go check on your house. The last thing you need is someone calling you saying they have a monkey fist with nails impaling their shoulder. Be considerate and make sure these traps can be taken down or avoided by those who know they’re there.
The traps that we will show you are meant to be easily disarmed for the safety of those using them, and those who might be unwilling “testers” of these traps.
These traps are meant to be in an almost obvious place, but to someone who’s moving fast and never been through your home, they will be most likely to get caught in these. Please keep that in mind.
And these booby traps don’t need to be all over your house. They only need to be in the most valuable areas, like where you keep your weapons. Medical resources and highly valuables. What you don’t want to do is set one up around your bug out bags and get yourself or a family member caught in one in an already dramatic situation.
Before you set up a single trap, you need to have a way to dismantle or disarm it within about 4 seconds. And if it’s a gun rigged to shoot as soon as you open the door then I guess just kick open the door, that would be the fastest and most fun way to do it J. But in all seriousness, you need to have a plan in place with those around you to be able to take these bad boys down in a dire situation
Also you don’t want to set something up that’s going to be worn down by time, or even worse, one that needs to be changed every day. Which is why we will bring you the best ideas later in this post for booby traps that are best for the 9-5 prepper, or the person who doesn’t have all the time and resources at their disposal.
Booby Trap Options
This is the moment you’ve all been waiting for, and it would be kind of funny if I just posted screen shots of Looney Toons traps, but I’m not that mean. So here’s the best booby traps that require minimal maintenance, are easiest to set up and take down and most of all are pretty affordable to set up time wise and money wise.
A Trip Wire
Yup, old faithful. This is the one that I use in my home, it’s the easiest to set up and you can’t do much harm with it to any well meaning people who stumble on it(quite literally stumble haha). It’s just enough to buy you a few precious seconds to get to a safe room, or give you the upper hand in a struggle for your home.
Connecting this trip wire to a c4 charge…KIDDING, connecting this wire to an alarm system will add more protection. Yes you could connect this trip wire to more lethal things, but for the sake of others involved in your life, don’t do it! 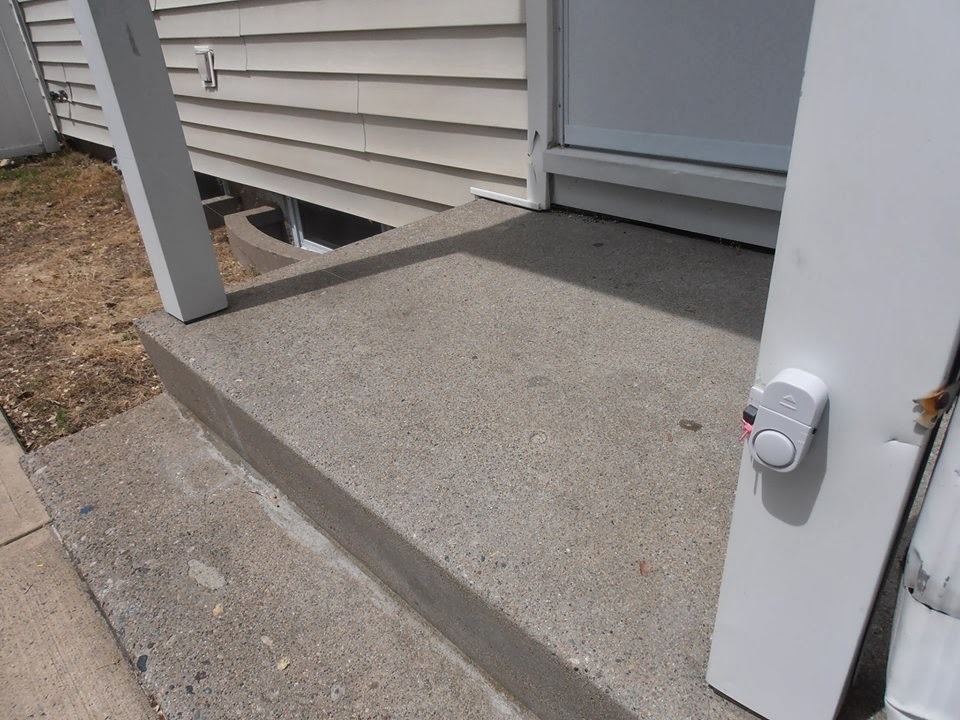 Thumb Tacks and Razor Blades
When someone your chasing slams a door shut behind them what do you think the pursuer will do, well reach for the handle of course! But what if that handle has a razor blade mounted to the inside of it? Again this isn’t an extremely technical or elaborate trap, but will buy you enough time to get to what you need, and will hinder your intruder in a pretty serious way depending on how hard they went for the handle.
You can dismantle the handle, make cuts in the handle and place the razor blades in the cuts to make it less noticeable than the handle shown above. However, when someone is chasing you, it’s not like they’re going to be familiar enough with your house to notice that there’s something off about this handle. 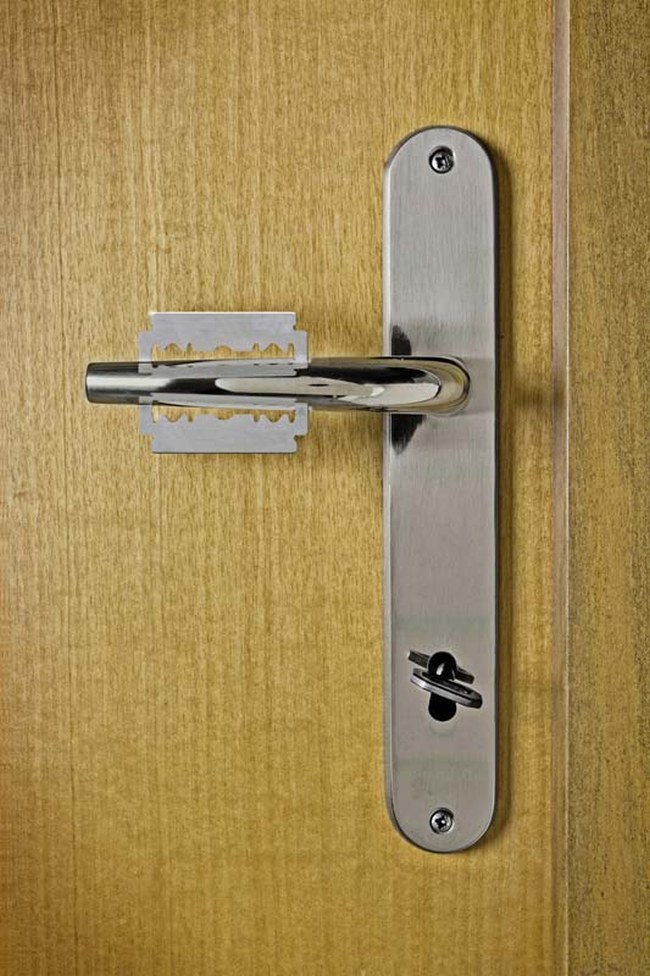 Tasers & Door Handles
This one can be a bit dangerous, so only set this up if you have a way to break the circuit (by flipping a switch or something on the other side). This involves running a wire from an electrical source, either a taser or a small battery, to the door handle. There are ways to mount these wires into the door frame and set it to a wall mounted switch. That way all you have to do is shut the door behind you, flip the switch and there you go!
Also the switch adds another level of safety for the non intruders, just make sure there’s a sign or something on the switch! 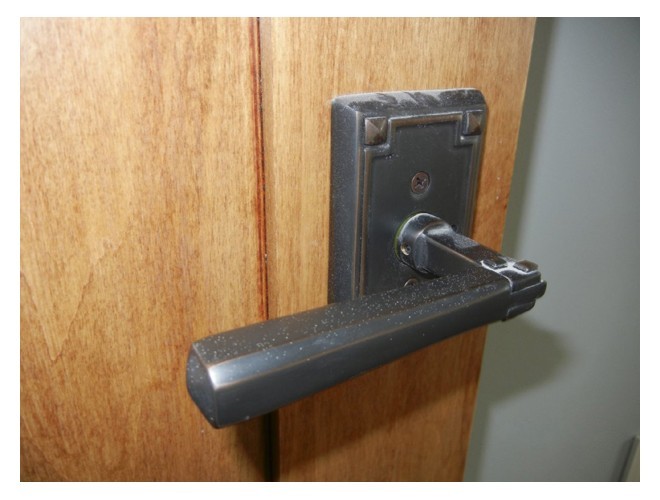 That’s it folks!
Sorry we didn’t show you how to blow your sister’s head off with an IED for your door, but seriously these types of traps are all you really need. The purpose of a booby trap in a home is not meant to eliminate the target, but to stun them and hinder them enough to slow them down and make them vulnerable mentally and physically.
These traps are simple and effective, which is perfect for the 9-5 prepper who has little time to spend rigging and un rigging traps going to work and coming home from work. Which again is what we cater to atsurvivethewild.net . We want you to benefit from the knowledge of other preppers.