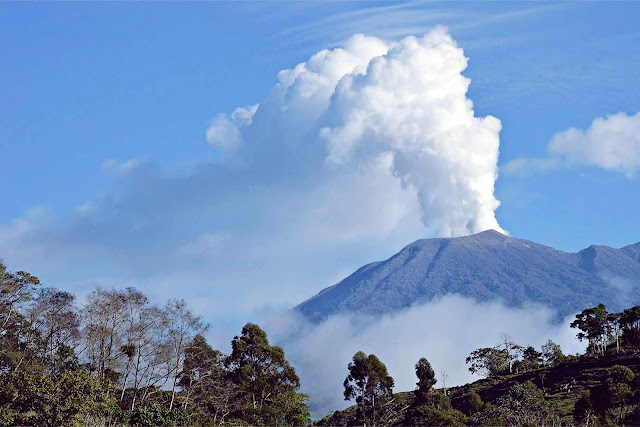 Photo ticotimes.net
The strong eruption by volcano Turrialba at the 01:19 local time affected a great part of the Costa Rican capital, which got up Thursday covered by a thin layer of ashes.
Television stations transmitted images of the exact moment of the explosion, with a column of smoke and ashes, gases and other materials
The Turrialba is 3,340 meters high, the 2nd highest in Costa Rica after the Irazu volcano, with 3,432 meters, and the experts stated that after this eruption, which lasted 11 minutes, the volcano went back to its passive state.
Most of the affectations were located in the Central Valley, particularly San Jose, the capital, and the smell at sulfur was still present, just as ashes in the air.
Sulfer can be seen being released from the eruption on the earthwindmap, what is also very interesting is massive sulphur dioxide from the Nicaraguan Concepcion volcano at the same time (see below)

Though the majority said that till now they have not presented any difficulty for this exhalation of the colossus, specialists recommend the asthmatic people and persons who suffer lung diseases to avoid to inhale the air impregnated with these gases.
Specialists of the Volcano and Seismological Observatory of Costa Rica talk about the perception of tremores of low intensity in the entrails of the Turrialba, that on Thursday, April 28th increased its eruptive activity.
This increase in its emanations forced the National Commission of Emergencies (CNE) to adopt a series of measures, as the suspension of classes and the extension of the yellow alert from two to five kilometres in the surroundings of the Turrialba.
For the experts, the eruption of this dawn is comparable with the ones reported in October, 2014 and March 2015, when the hill presented strong eruptions.
What calls the attention is that after the emanations of last days, the volcano diminished its emanations and the CNE decided to raise the adopted measures.
This way, the Department of Public Education announced that today the educational personnel and the student population of the schools of the region will take again the normal development of the school cycle.
Still it is not known if these educational centers resumed the classes, though the certain thing is that in this eruption the affected zone is different to the one that forced CNE to implement the above-mentioned measures.