Posted on May 18, 2016 by sundance
BREAKING – Egypt Air is reporting Flight MS804 (59 passengers, 10 crew) was traveling from Paris to Cairo when it vanished from radar screens.  The Boeing 737 last reported its location (4:07am Local Time) over the waters of the eastern Mediterranean.  Additional information was not immediately available. 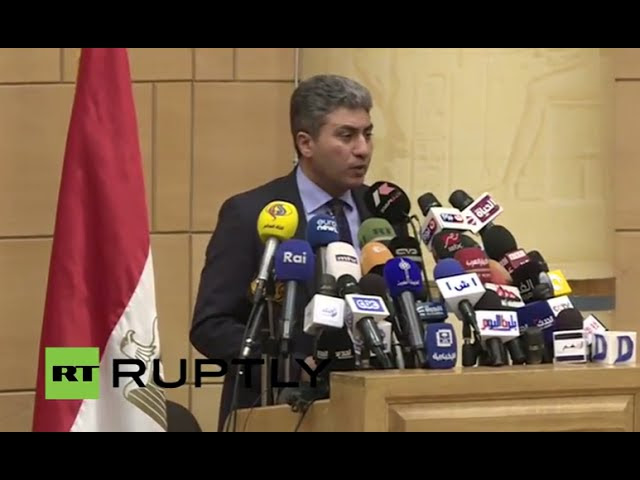 Admin
Posts : 90785
Join date : 2012-01-04
Location : Woodstock Nation
Authorities Now Say EgyptAir Flight MS804 Was Brought Down By Muslim Terrorist Attack
Flight MS804 came down near the Greek island of Karpathos ten miles into Egyptian airspace at around 00.30am GMT without making a distress call. Greek defence minister Panos Kammenos said the Airbus A320 made 'sudden swerves' mid-air, lurching 90 degrees to the left then 360 degrees to the right as it fell out of the sky.

The EgyptAir plane that crashed into the Mediterranean Sea with 66 people on board went into a sudden spin and plunged 22,000ft before vanishing off the radar, a Greek minister revealed today

Flight MS804 came down near the Greek island of Karpathos ten miles into Egyptian airspace at around 00.30am GMT without making a distress call. Greek defence minister Panos Kammenos said the Airbus A320 made ‘sudden swerves’ mid-air, lurching 90 degrees to the left then 360 degrees to the right as it fell out of the sky.

The revelation came after a former air accident chief said all the evidence pointed to the plane being targeted in a terrorist attack.

The Airbus A320 left the French capital’s Charles De Gaulle Airport at 9.09pm GMT last night before coming down off the Greek island of Karpathos ten miles into Egyptian airspace at around 00.30am GMT. Officials said there was no distress call.


The 56 passengers on board included one Briton, 30 Egyptians, 15 French, one Belgian, one Iraqi, one Kuwaiti, one Saudi Arabian, one Chadian, one Portuguese, one Algerian and one Canadian. There were 10 crew on flight MS804 including three security guards.
Jean-Paul Troadec, the former chief of the BEA national investigation unit, said the lack of a live emergency alert suggested a ‘brutal event’.
He told Europe 1 radio station in Paris: ‘A technical problem, a fire or a failed motor do not cause an instant accident and the team has time to react.
‘The team said nothing, they did not react, so it was very probably a brutal event and we can certainly think about an attack.’
His comments came after a merchant ship captain reported seeing a ‘flame in the sky’ over the Mediterranean. France called a crisis meeting of top ministers as Prime Minister Manuel Valls said ‘no theory can be ruled out’ to explain the plane’s disappearance.
ISIS has been waging a deadly insurgency against Egyptian security forces and last October claimed the bombing of a Russian airliner flying home holidaymakers from the Egyptian resort of Sharm El-Sheikh which killed all 224 people on board.


The flight was the aircraft’s fifth of the day, having also flown to the Eritrean capital of Asmara, the Tunisian capital Tunis and Brussels in Belgium.

The British Foreign Office said it was in contact with the family of a British national feared dead.
EgyptAir first reported on the disappearance of the flight, tweeting: ‘An informed source at EGYPTAIR stated that Flight no MS804,which departed Paris at 9.09pm (GMT), heading to Cairo has disappeared from radar.’
The director of Greece’s Civil Aviation Authority says air traffic controllers were in contact with the pilot of the EgyptAir flight as it passed through Greek airspace. Konstantinos Lintzerakos said the plane was at 37,000 feet, travelling at 519 mph, and did not report any problems.
Lyzerakos told private Antenna television that controllers tried to make contact with the pilot 10 miles before the flight exited the Greek Flight Information Range (FIR), but the pilot did not respond.
Lyzerakos said controllers continued trying to contact the pilot until 0.39am GMT when the plane disappeared from the radar, around 10 miles into Egyptian airspace.
Egypt’s state-run newspaper Al-Ahram quoted an airport official as saying the pilot did not send a distress call and that last contact with the plane was made 10 minutes before it disappeared from radar.
EgyptAir said the plane sent an emergency signal, possibly from an emergency beacon attached to the plane, at 2.26am (GMT) two hours after it vanished. source

This story is developing — please check back for updates.
French President François Hollande has confirmed that the EgyptAir flight from Paris to Cairo that went missing early on Thursday morning with 66 people on board has crashed.
In a press conference in the French capital, Hollande said: "The information we have gathered — ministers, members of government and, of course, the Egyptian authorities — confirm, sadly, that it has crashed. It is lost."
A Greek frigate searching for the EgyptAir aircraft discovered two large floating objects in the sea 230 miles (370 km) south of the island of Crete on Thursday, Greek defence sources said. The objects were spotted close to an area where a transponder signal was emitted earlier, the sources said.
Hollande said no hypothesis could be ruled out in regards what had happened.
Separately, Paris prosecutors said that they were opening an investigation into the matter, while Egypt's general prosecutor has ordered a state security investigation, judicial sources told Reuters.
Greece's defense minister told a news conference that the missing airliner had made "sudden swerves" mid-air and plunged before dropping off radars in the southern Mediterranean.


"At 3.39am (local time) the course of the aircraft was south and south-east of [the islands] Kassos and Karpathos," Panos Kammenos said. "Immediately after it entered Cairo FIR [radar coverage area] and made swerves and a descent I describe; 90 degrees left and then 360 degrees to the right."
Egypt's minister of civil aviation, Sherif Fathy, said in another press conference that it had been a "difficult day."
Fathy said he was not willing to talk about "theories" and "rumors," denied the plane had been suffering from technical problems, and asked the media to stop speculating about what's happened until there is more information. "We have no other information other than we know there is a missing plane and there are various reasons for this situation," he said.
EgyptAir flight MS804, operated by an Airbus A320 twinjet, had departed Paris at 11.09pm local time Wednesday, headed to Cairo nonstop.
Subsequent tweets by EgyptAir said that the plane, which was traveling at an altitude of 37,000 feet (11,280 meters), lost contact soon after entering Egyptian airspace. The aircraft was carrying 56 passengers, including one child and two infants, and 10 crew.
Earlier EgyptAir had said 59 passengers were aboard, but then revised the figure.
Egypt's Aviation Ministry said 30 Egyptians, 15 French, one Briton, and a Belgian were among the 66 people on board. The airline also stated that the plane was carrying passengers from Iraq, Canada, Kuwait, Saudi Arabia, Algeria, Sudan, Chad, and Portugal, according to the BBC.


UK Foreign Secretary Philip Hammond also confirmed a British passport holder was on board the plane.


The crew was experienced, with a captain who had clocked up 6,275 hours of flying experience, including 2,101 hours on the A320, while the first officer had 2,766 hours, EgyptAir said.
According to flight tracking site flightradar24.com, the twin-engine jet was registered with the Egyptian tail number SU-GCC. Several airline fleet-tracking sites indicate that it was delivered new to the Egyptian carrier in 2003 , making it a relatively young 13-year old airframe. Modern, well-maintained jets have useful lifespans far in excess of that.
Egypt's state newspaper Al Ahram reported that there had been no distress call from the plane and that the last contact with the pilot was about 10 minutes before the aircraft disappeared.
The New York Times quoted Ehab Mohy el-Deen, the head of Egypt's air navigation authority, as saying that Greek air traffic controllers notified their Egyptian counterparts that they had lost contact with the plane.
"They did not radio for help or lose altitude," he said. "They just vanished."
The plane disappeared from radar screens two minutes after exiting Greek airspace at 3.27am local time (00:27 GMT) on Thursday morning, the head of Greece's civil aviation department said. Greek air traffic controllers spoke to the pilot over the island of Kea, in what was thought to be the last broadcast from the aircraft.
"The pilot did not mention any problems," Kostas Litzerakis, head of Greece's civil aviation department told Reuters.
French Prime Minister Manuel Valls said on Thursday that France is ruling nothing out as to why the plane went missing.
"We are in close contact with the Egyptian authorities, both civil and military. The Egyptian authorities have already sent air reconnaissance teams to the site, and France is ready to help with the search if the Egyptian authorities ask, of course," Valls told RTL radio.
Rescue services from the Egyptian armed forces had initially reported receiving a distress signal at 4:26 am local time (2:26 GMT) from the aircraft, an official from the airline later said in a statement — but this was denied shortly afterwards by the military.
The Airbus A320 family is one of the world's most popular commercial airplanes — with more than 7,000 built, it is second in sales among jetliners only to the Boeing 737. Built by the European consortium Airbus at assembly lines in France, Germany, China and the US, it has been produced in five different models, from the A318 to A321 in order of size. The A320 typically seats 150 passengers and can fly for up to 5,700 km (3,600 mi.) At 2,000 miles, the Paris-Cairo route is well within the airplane's capabilities.
EgyptAir has a fleet of recently built jets and is a member of Star Alliance, the largest airline alliance in the world, alongside giants such as United Airlines, Germany's Lufthansa and Air Canada. Its maintenance and safety procedures are considered on par with Western carriers, although it suffered a major, and controversial, crash in 1999 when a Boeing 767 en route from New York to Cairo plunged into the Atlantic Ocean shortly after departure. That crash, which killed all 217 aboard, was determined by a US investigation to have been caused by the first officer's intentional actions. Egypt authorities dispute that it was a suicide.
The airline's most recent fatal crash occurred in 2002, when a Boeing 737 on approach to Tunis from Cairo hit high ground during a sandstorm, killing 14.
An Airbus A321 operated by Russia's Metrojet crashed in Egypt's Sinai peninsula on October 31 last year, killing all 224 people on board. Russia and Western governments have said the plane was likely brought down by a bomb, and the Islamic State militant group said it had smuggled an explosive on board.
Reuters reported in January that an EgyptAir mechanic, whose cousin joined the Islamic State in Syria, is suspected of planting the bomb, according to sources familiar with the matter.
In March, an EgyptAir A320 flying from Alexandria to Cairo was hijacked and forced to land in Cyprus by a man with what authorities said was a fake suicide belt. He was arrested after giving himself up.
Without any known indications that the crew may have declared an emergency or that the plane was in distress, there is no immediate, credible scenario for what could have brought down the jet.
Follow VICE News on Twitter: @vicenews