Gaps in the Wall of Ordinary Consciousness

Gaps in the Wall of Ordinary Consciousness 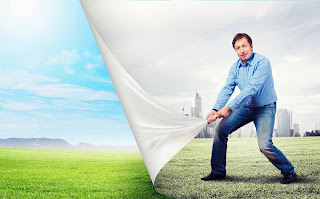 Every child is fond of playing. Imagine that your parents take you to a huge playground which is full of exciting toys and children playing with those toys. You are also pleased to be involved, sit on the swing, build a sandcastle, test your skills on the climbing wall etc. You make friends with other children, or you fight a tug-of-war for a toy. You spend there days, weeks, playing absent-mindedly and enjoying the company of your new friends.
Then the time comes when you have tried all the toys, and you have made friends with all the children you have found worth making friends with. So you stop playing for a while, and take a good look around the playground for the first time. So far you have been so deeply involved in playing that you have not noticed that the playground is surrounded with a high stone wall, and you can neither see nor climb through it.
Now you also realize that you are not the only one who is interested in the stone wall. Several others are also staring at it, and some even try to climb it. But nobody succeeds, because the wall is too high.
You hear other children saying that there is an even more beautiful playground, with wonderful toys, on the other side of the wall. Others say that some children have been able to get through the wall, and they have sent messages from the other side. The message is that true happiness and a carefree existence is only found over there, on the other side of the wall. You soon find yourself under the spell of the wall. You are no longer interested in your favourite toys and your old pals. You are watching them with irony as they are playing devotedly, and they do not seem to have any idea that there is a much, much better playground over there with toys that we are not even able to imagine here.
You also do your best to get through the wall. First you try to climb it, but that is impossible. You try to break through it, but that is also futile–it is too thick and solid. Then you join forces with others, you organize joint action to beat the wall, but to no avail. In your final despair you even try to learn to fly in order to get through. Naturally, that is unsuccessful, too.
We all know the feeling what the young child live through during his futile efforts, as we are also the captives of a playground, that is, ordinary consciousness. It is true, that our playground is the whole Earth, and there are no visible walls around us. Our wall is invisible, covered by the veil of ordinariness, separating the world of forms and shapes from the reality beyond it.
We have also done a lot in order to get through the wall, and most of us have failed. On this inner wall, on the grey veil of ordinary consciousness, there are gaps every now and then, and the bright light of the Miracle shines through the gaps. The gaps are too small for us to get through, but have a glimpse to the reality behind the wall, to the Miracle of Consciousness .

Such moments are rare in the life of a man, but they are still there for all those who pay attention and want to see them. The toys of our daily life, however, occupy all our attention so much that we do not even notice the opportunity that opens up for us, our attention slips away from the Miracle.
When we submerge in our ordinary consciousness, our attention keeps wandering from past to future. The moments of insight, the moments of the Miracle are, however, only available in the Present, only if we leave behind the psychological time, the memories of the past and the expectations of the future all vanish, and we are able to focus our attention to the Miracle that unfolds in front of our eyes in the Present.
If we remain the prisoners of the psychological past, we will not be able to make use of the rare moments, we do not even notice the gaps in the wall through which we can get a glimpse of the Miracle, the real nature of our own existence.
In the following we intend to deal in detail with moments in our life when we offer us the chance to take a look through the wall.

(C) Frank M. Wanderer, 2013-2016.
You can republish our articles for free, but please include the author's name and a link to our homepage (www.frankmwanderer.com )