BREAKING; AFTER 36’000 YEARS MOUNT VESUVIUS RUMBLES TO LIFE plus More

Posted on July 20, 2016 by https://dublinsmick.wordpress.com

After 36,000 years, a massive volcano near Rome rumbles to life

Posted on July 16, 2016 by The Extinction Protocol

July 2016 – ROME, Italy – The country of Italy, home to one of the most famous volcanic disasters in history, is showing signs that another massive eruption is brewing, according to a new study published in the journal Geophysical Research Letters. Almost 2,000 years after the burial of Pompeii and nearby Herculaneum during the eruption of Mt. Vesuvius in 79 A.D., an ancient volcano near Rome is rumbling to life, say scientists. About 19 miles away from the heart of Rome, an ancient volcanic district called the Colli Albani is stirring. The Colli Albani, a 9-mile-long semicircle of hills on the outskirts of Rome, last erupted 36,000 years ago, so geologists had classified it as extinct – until about 20 years ago.
In the early 1990s, the area around the Colli Albani Volcanic District began showing geological indicators of a future explosion: ground levels shifted, steam vents opened, and earthquakes shook the hills around the site. Since that time, scientists have used these symptoms, along with satellite data and information about the volcano’s previous eruptions, to evaluate the risk that the Colli Albani poses to the surrounding region.
The increase in earthquakes (many of which occurred during an “earthquake swarm” between 1991 and 1995) and ground level changes in the region indicate the presence of a magma bubble forming beneath the earth near Colli Albani, pushing upwards until it can erupt. Using historical data, researchers determined that Colli Albani is not extinct, as was long believed – it merely operates on a 31,000-year cycle of dormancy and wakefulness. And when the volcano is awake, scientists say, it is dangerous.
Over the last 200,000 years, scientists say that the region surrounding the Colli Albani has risen by 164 feet, and it continues to rise by nearly an inch per year, indicating that the magma bubble is still growing. For thousands of years, the magma bubble has been trapped by pieces of land that have now begun sliding against each other. If those pieces shift enough, Colli Albani will erupt.
When conditions are right (or, from a human perspective, terribly, terribly wrong), Colli Albani can produce eruptions similar to the one that destroyed Pompeii and Herculaneum in 79 AD. Like Vesuvius, Colli Albani could erupt with a towering cloud of burning ash and showers of heated “lava bombs” that could damage or destroy nearby towns. Past eruptions have also seen swift streams of lava, scientists say, where Roman suburbs now cluster. A future eruption could devastate them. Rome itself would be safe from such an eruption in all but the very worst of circumstances. If the wind is blowing in the right direction, it could steer an ash cloud from Colli Albani towards the heart of the city.
The good news, according to researchers, is that time is on Rome’s side. The study’s lead author, Fabrizio Marra, a volcanologist at the National Institute of Geophysics and Volcanology in Rome, told the American Geological Union that he does not expect the Colli Albani to erupt for another 1,000 years. “We expect for sure some initial stages which may not be so explosive,” said Dr. Marra, “but it may evolve in time.”  –Christian Science Monitor
https://theextinctionprotocol.wordpress.com/2016/07/16/after-36000-years-a-massive-volcano-near-rome-rumbles-to-life/
____________________________________________________________
http://earthquaketrack.com/p/martinique/recent

Posted on February 18, 2014 by https://dublinsmick.wordpress.com
Updated 9-24-2014
Cayce did predict the hall of records would be found before the total inundation would begin and they have been found. It was under the sphinx alright but not the one in Egypt. When Pelee and Vesuvius erupt basically simultaneously it will begin. We haven’t had that yet.

The fulfillment of Edgar Cayce’s end time prophecy seems to be on track. Cayce’s end-time prophecy includes predictions of erupting volcanoes, earthquake swarms, and major earth changes.
What seems to be missing at present are “noticeable eruptions” at Mt. Vesuvius in Italy or Mt. Pelee in the Caribbean. According to Cayce, when either of them begin “noticeable eruptions,”we should expect major earthquakes along the southern coast of California within three months. He also predicted a pole shift following closely on the heels of volcanic eruptions by Mt. Vesuvius or Mt. Pelee. He predicted the discovery of Atlantis .. this took place off Florida with the location of the so called Bimini wall, huge stone walls under the Atlantic Ocean and he also predicted the Hall of Records would be found in Egypt at the paw of the Sphinx. Sonar appears to have located it. How long it will take for the general public announcement however is debatable. Egypt is heavily under sway of the west due to very valuable objects still under the sand and it is very valuable real estate.
http://dublinsmick.wordpress.com/2013/07/19/scallion-map-shows-palestine-israel-syria-vanish-due-to-african-rift-large-cracks-in-navajo-nation-louisiana-salt-dome-continues-to-swallow-acreage/
https://dublinsmick.wordpress.com/2013/09/12/unbelievable-underwater-photos-of-atlantis-off-cuba-pyramids-are-3-times-the-size-of-cheops-cayce-was-right-there-was-a-polar-shift/
http://news.sky.com/story/1213439/earthquake-hits-caribbean-island-of-barbados
Mount Pelée (/ p ə ˈ l eɪ / ; French : Montagne Pelée “Bald Mountain”) is an active volcano  at the northern end of the island and French  overseas department  of Martinique  in the Lesser Antilles  island arc of the Caribbean . Its volcanic cone  is composed of layers of volcanic ash  and hardened lava .[2]
The stratovolcano  is famous for its eruption in 1902 and the destruction that resulted, dubbed the worst volcanic disaster  of the 20th century.[3] [4] [5]  The eruption killed about 30,000 people.[6] [7]  Most deaths were caused by pyroclastic flows  and occurred in the city of Saint-Pierre , which was, at that time, the largest city on the island.[8] [9]
Pyroclastic flows completely destroyed St. Pierre, a town of 30,000 people, within minutes of the eruption.[10]  The eruption left only two survivors in the direct path of the flows (with a third reported): Louis-Auguste Cyparis  survived because he was in a poorly ventilated, dungeon -like jail  cell; Léon Compère-Léandre , living on the edge of the city, escaped with severe burns.[11]  Havivra Da Ifrile, a young girl, reportedly escaped with injuries during the eruption by taking a small boat to a cave down shore, and was later found adrift two miles (3 km) from the island, unconscious. The event marked the only major volcanic disaster in the history of France and its overseas territories.

http://en.wikipedia.org/wiki/Mount_Pelée
https://dublinsmick.wordpress.com/2013/05/16/bayou-corne-and-the-new-madrid-fault-could-connect-with-cayce-predictions/
https://dublinsmick.wordpress.com/2012/08/20/mother-of-all-sinkholes-could-produce-blast-of-100-hiroshimas-chaos-as-far-as-houston-1-5-million-barrels-of-butane-awakening-new-madrid-theory-waterford-and-river-bend-plants-are-in-area/
http://www.crystalinks.com/caycearthchanges.htm l
(Bare in mind Cayce himself said timelines can change due to human thought patterns, events do not)
Edgar Cayce predicted that dramatic physical changes would affect the Earth in the years 1958-1998 and would begin with the eruption of Mt. Etna.
The Great Lakes would empty into the Gulf of Mexico linked with a time when ancient repositories would be discovered as people reached the appropriate level of consciousness. The three repositories mentioned are Egypt, the Bimini area, and the Yucatan.
After activities by Mt. Vesuvius, Mt. Pelee, the southern coast of California, the areas between Great Salt Lake and the southern portions of Nevada, we may expect, within the three months following, inundation by earthquakes, more in the Southern than the Northern Hemisphere. Portions of the New York, or New York City itself, will disappear as well as the southern portions of Carolina and Georgia .
Georgia
Land will appear in the Atlantic and Pacific. Rise of Atlantis. And what is the coast line now of many a land will be the bed of the ocean. Even many battle fields of the present will be oceans, seas,the bays, the lands over which ‘The New World Order’ will carry on their trade as one with another.
The waters of the lakes will empty into the Gulf. It would be well if the waterway were prepared, but not for that purpose for which it is at present being considered. Then the area where I am now located (Virginia Beach) will be among the safety lands, as will be portions of what is now Ohio, Indiana and Illinois, and much of the southern portion of Canada and the eastern portion of Canada, while the western land — much of that is to be disturbed as, of course much in other lands.
The greater portion of Japan must go into the sea.
The upper portion of Europe will be changed as in the twinkling of an eye.
When there is the first breaking up of some conditions in the South Sea and those as apparent in the sinking or rising of that that’s almost opposite same, or in the Mediterranean, and the Etna area, then we many know it has begun.
There will be the upheavals in the Arctic and in the Antarctic that will make for the eruption of volcanoes in the torrid areas, and there will be the shifting then of the poles – where there has been those of a frigid or the semi-tropical will become the more tropical, and moss and fern will grow.
Strifes will arise through the period. Watch for them near the Davis Strait [between Greenland and Canada] in the attempts there for the keeping of the life line to land open. Watch for them in Libya and in Egypt, in Ankara and in Syria, through the straits about those areas above Australia, in the Indian Ocean and the Persian Gulf.
This is not totally irrelevant to the story at hand.
https://dublinsmickdotcom.wordpress.com/2013/11/19/the-sky-disintegrates-and-turns-to-dust-the-great-earth-becomes-peaceful-no-one-can-see-it/
https://dublinsmick.wordpress.com/2013/09/22/noticed-anything-unusual-lately-biblical-floods-volcanic-eruption-earthquakes-there-is-more-to-this-than-ha-ha-al-gore-was-wrong/
https://dublinsmickdotcom.wordpress.com/2014/02/08/submerged-forest-in-gulf-of-mexico-unearthed-by-katrina-80-thousand-years-old/
https://dublinsmick.wordpress.com/2014/02/22/dna-evidence-for-atlantis-edgar-cayce-right-again/

There have been some things that recently caught my attention. Yellowstone National Park is once again experiencing some rather unusual happenings. A mound is rising with cracks in it. Also there was a 6.9 earthquake near Barbados the USGS seems to have missed on their recorders.
Why is this important? Well if you follow Cayce he predicts that the Eruption of Pelee on Martinique in conjunction with Vesuvius erupting simaltaneously, signals rapid earth change with portions of Nevada and Utah undergoing destruction within 3 months.
The under sea area around Barbados and the Island of Martinique is heavily dotted with volcanoes. 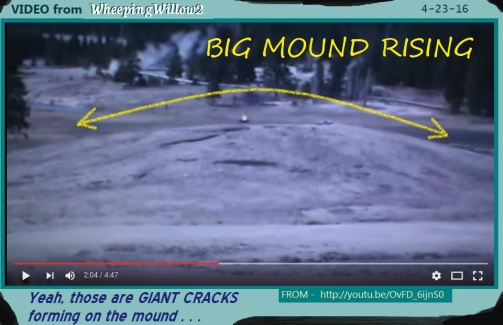