OUT OF MIND » THE INSANITY OF REALITY » GOVERNMENT & THE NEW WORLD ORDER » Apparently Hillary was ARRESTED?? Reports Now That She is Dead??

Apparently Hillary was ARRESTED?? Reports Now That She is Dead??

The narrator is focusing on the guy with the phone, he doesn’t appear to see Hillary’s hands are handcuffed behind her back. You can clearly see her hands just above the pole at 2:27. That’s why she stumbled, they weren’t handling her very gently as she stepped off the curb and the lady on her left had a good hold on her arm as if to keep her from running, not prevent her from falling. That’s how a prisoner is held when being transported.
When Grandma’s sick, we put our arm around her shoulder or waist to help them walk. Not tie her hands behind her back, drag her from the curb and shove her into the van.
While everyone’s so focused on her illness, she’s actually being arrested. Talk about slight of hand on media coverage. Have a feeling more revealing pics will surface and go viral.
The narrative below also makes sense if she was being arrested, they apparently had their own assets filming the arrest. Where’s husband, where’s her assistant? Looks like the only person there that knows her is her doctor.
Ohhh my goodness, things just got REAL interesting folks. Remember earlier this year when I said Hillary would be indicted and Bernie would take the election by landslide?  Now it’s making it to the election….

Thanks to S for the forward

Hillary Clinton: Has the US been set up for the final take down?

EXCLUSIVE: IS HILLARY CLINTON ALREADY DEAD?
or  HAS THE UNITED STATES BEEN SET UP FOR THE BEGINNING OF THE FINAL TAKE DOWN?  YOU DECIDE.
September 12, 2016 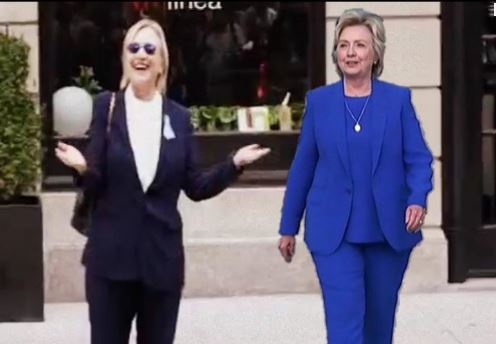 The real Hillary Clinton has been replaced by a clone (We disagree. Reports to us were that there were six clones of HC,
and this woman is not one of them. She is a real person.
See: http://nesaranews.blogspot.com/2016/09/hillary-clintons-death.html )

There are major questions being raised about the fate of Democratic presidential Nominee Hillary Clinton after she collapsed at a Sept 11 commemoration on Sunday morning.

Clinton, who turned 68 earlier this year, has been in declining health since 2012 following an incident in which she suffered blood clot in the brain. Clinton collapsed on Sunday morning as she abruptly left Ground Zero during the annual Sept 11 memorial ceremony.  She was unable to stand on her own as she was swiftly ushered into a black van along West Street in Lower Manhattan. Aides held both of her arms to keep her from hitting the pavement.

Clinton — who has been dogged by accusations of poor health — appeared to faint shortly before a moment of silence at 9:58 a.m. to commemorate the fall of the South Tower of the former World Trade Center, sources told The Gutter Trash. The former secretary of state’s knees buckled and she lost a shoe as her security team hustled her away, a witness said.  Earlier, she was the photographed looking pale while surrounded by pols including Mayor de Blasio and US Sen. Charles Schumer (D-NY). Clinton was wearing dark sunglasses, and was the only person in the crowd wearing shades during the overcast morning.

A witness at the location told us that she didn’t look well at all –  “She unexpectedly left early because of what appeared to be a medical episode.” “I have a law enforcement source who was there, who was 15 feet away form Hillary Clinton. He said she was standing on a curb with her protective detail waiting for her motorcade.” “They were surprised to see her because she wasn’t meant to be leaving yet.” “When it finally rolled up my source said she stumbled off the curb, appeared to faint, lost one of her shoes, which wound up under the van.” “She started turning blue, as if she was already dead.”

Press reporters weren’t immediately informed about where Clinton was taken, but found out about 15 minutes later that she been taken to her daughter’s nearby apartment where medics were already on standby. 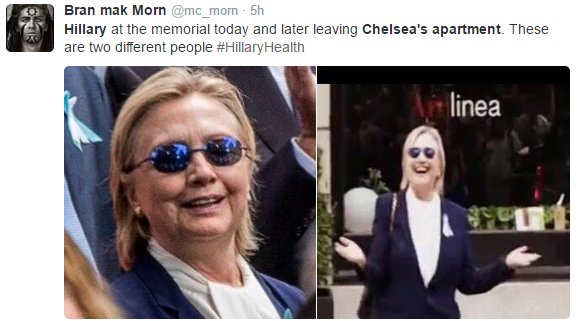 Moments later, “Clinton,” or someone closely resembling her appearance, emerged from her daughter’s apartment smiling and waving at reporters and saying, “I feel great.”  Was she overcome with emotion, given the memories attached to this day? Was she dehydrated, or too hot from standing outside in the September heat for a long period of time? Or could something else more sinister be unfolding?

HILLARY CLINTON HAS BEEN REPLACED BY “A CLONE!”
(The author of this article has info confused)

With thanks to our exclusive sources, we can reveal that Clinton was, in fact, replaced by a ‘body double’ after the medical emergency and we have the evidence to prove it. Firstly, why was there already a team of medical experts on hand at Chelsea’s apartment before Hillary Clinton had even taken ill?  If this part of some greater plot to replace the US President with a clone? (Why a clone? Why not a body double - a woman from the UK who looks very much like HC who was brought here to 'help out'?)

Secondly, how could Clinton, already suffering from deteriorating health, manage to stage such a remarkable recovery in a matter of minutes?  It just doesn’t stack up.

Thirdly, the body double that left Chelsea’s apartment doesn’t even look like Hillary Clinton, but it explains why Hillary was wearing sunglasses at the memorial event – so that the body double could escape detailed scrutiny.

However, it’s clear from photos of “Clinton” leaving the apartment that the body double is several pounds lighter than Clinton and several years younger. Tellingly, Clinton had dark roots showing in her hair at the memorial event but was a pure blonde leaving the apartment. 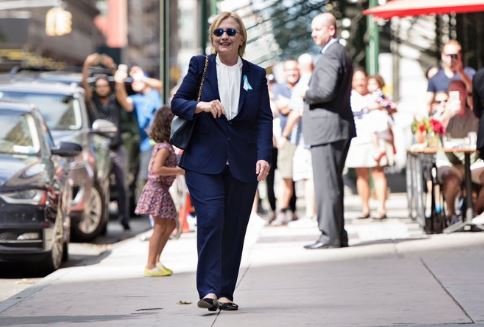 When have you ever seen Hillary Clinton with no one around?

Also, all through her 2016 campaign, Clinton has always been surrounded by an entourage. The majority of the entourage that are attached to Clinton are members of the Secret Service. No agents are seen with Clinton as she exits the apartment building. The following picture shows the potential body double without any of her entourage around her. When have you ever seen Hillary Clinton with no one around her? 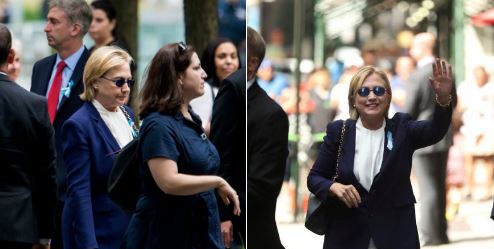 How many women change the shoulder they hang their purse from?

Conspiracy theorists are stating that there is no need to protect this person because she is a body double. Would the Secret Service allow Clinton to be alone after what happened earlier in the day? Many people say no and that this body double was used to make it difficult for her health issues to be brought up during the remaining weeks of the 2016 campaign.

The use of a body double is a tactic that has been employed many times by world leaders throughout history. The actual term for using a body double like this is called political decoy. Some of the most famous leaders that used a body double include Adolf Hitler, Joseph Stalin, Saddam Hussein, and Osama Bin Laden. It is believed that Winston Churchill did not have a body double but a voice double.

Hillary Clinton’s health issues have slowly started to become a focal point in the 2016 election cycle. Many people want her medical records to be released so that the voters can decide for themselves if they believe that Clinton is healthy enough to deal with the stress that the President of the United States faces every day.

HOW MANY HILLARY’S ARE THERE? 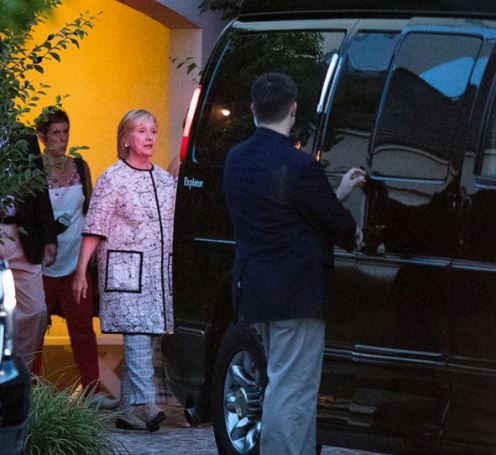 Exclusive: Another Clinton clone prepares to get in the van

How many different Hillary Clintons are there? It has been suggested that over half the US Presidential hopefuls in 2008 were human clones.

Was Hillary Clinton one of these or several of them? How many more of them are there? And how are the voters to discriminate?

NOW THAT THE INFORMATION IS OUT THAT HC IS, INDEED, DEAD - THE FURTHER USE OF CLONES IS A MOOT POINT. MANY ARE NOW WELL AWARE OF THE USE OF CLONES AND DOUBLES/LOOK ALIKES, SO HOPEFULLY IT WON'T BE SO EASY TO CONTINUE TO FOOL THE AMERICANS - OR WILL IT??? NOW IT APPEARS THAT THE TV TRAITORS WORKING FOR THE NWO/ILLUMINATI WITH SCRIPTED REPORTS ARE REPORTING THAT HILLARY CLINTON IS ALIVE!  SO YOU BELIEVE WHAT THE LYING MEDIA IS TELLING YOU, DO YOU?  WHY WOULD THEY REPORT TRUTH NOW WHEN THEY HAVE BEEN LYING TO YOU FOR YEARS AND YEARS?  IF YOU 'SEE' HILLARY CLINTON ANYWHERE, YOU ARE SEEING A CLONE - AND NOT THE REAL HILLARY CLINTON. DON'T BE FOOLED.

Good evening, everyone. I'm Sandra Bookman. And I'm Joe Torres. We begin with the breaking news of Hillary Clinton's death.

Is Hillary DEAD or ALIVE?

Given the Shadow Government’s penchant for predicting their own crimes and atrocities in ways that are easily dismissible until they have struck, I can’t totally write off the foolish sounding headlines today, announcing Hillary Clinton’s death.
Also, please note the growing inconsistencies surrounding Hillary’s health, as reported by Dr. Eowyn:  https://fellowshipoftheminds.com/2016/09/12/mystery-hillary-handcuffed-at-911-memorial-ceremony/

Did wannabe US president Hillary Clinton ‘die under hospital …

Daily Star–5 hours ago
HILLARY Clinton died “under hospital treatment” after collapsing from … irregularities suggest Hillary had a brain seizure, is dying or is dead, …

LOUIS BABCOCK
Hillary Clinton had some type of medical episode yesterday during a 9/11 event in New York City. A video showing Clinton being dragged into her van surfaced, which added more fuel to the fire for the conspiracy theories claiming she has a major illness.
It was not until a few hours later that a new Hillary Clinton conspiracy theory was born. Clinton emerged from her daughter’s apartment looking healthier than she has recently. It was at this time that conspiracy theorists on the internet began to question if this person was Clinton at all or if she was a Hillary Clinton body double. Inquisitr first reported the Hillary Clinton body double conspiracy theory  yesterday. Now, evidence has been presented to prove their case…
Read more at http://www.inquisitr.com/3503451/hillary-clinton-body-double-evidence-clinton-body-double-teresa-barnwell-seizure-pneumonia/#lPUijxGYfoGco7Qy.99

Do I think she is dead?
I’m not sure she was ever alive.

OUT OF MIND » THE INSANITY OF REALITY » GOVERNMENT & THE NEW WORLD ORDER » Apparently Hillary was ARRESTED?? Reports Now That She is Dead??