OUT OF MIND » PERCEPTUAL AWARENESS » INFORMATIVE GUIDES FOR THE SHIFT IN CONSCIOUSNESS » The Time Eye: Nuts and Bolts of a Biological Future Detector

Rubbing my temples and squinting, I foresee that no less a science writer than James Gleick will very shortly be publishing a book called Time Travel . Unlike his most famous book, Chaos, which was incredibly forward looking—introducing a whole generation to a really cool new concept, “the butterfly effect” (i.e., the way a butterfly flapping its wings in Hong Kong influences the weather in New York a week later)—Time Travel is … er, will be … oddly backward looking, a retrospective view of H.G. Wells’ sci-fi trope and its impact on our culture. It will only barely, glancingly, remark on the emerging science that is destined to make time travel, or at least time-traveling information, a reality.
I foresee that despite brief obligatory musings on John Wheeler and wormholes, Gleick will use the word “retrocausation” only once in the book: “Retrocausation is now a topic,” he will say, and leave it at that. Mostly, he will reiterate again and again how time travel is obviously impossible, and that it’s only a meme, a literary device, a metaphor for our increasingly sped-up and time-obsessed society. Causes precede effects, and that’s that.
God really doesn’t play dice; he’s truly a master archer instead, a divine Legolas who can swiftly turn and shoot causal arrows in both directions.
I’m a big admirer of Gleick, but this will be a pretty unfortunate oversight on his part. Retrocausation is indeed a topic, one that is about to sweep over our culture like a tidal wave. How did he miss it?
The idea has been there from the beginning in modern physics’ upper echelons: Effects can theoretically precede their causes. But only in the past decade or so has the technology finally existed to test the idea. An increasing number of truly mind-blowing experiments are now confirming what Yakir Aharonov, for example, intuited already in the 1960s—that every single causal event in our world, every single interaction between two particles, is not only propogating an influence “forward” in the intuitive billiard-ball fashion but also carrying channels of influence backward from the future to the present and from the present to the past.
Until now, physicists have misinterpreted this whole half of causation as “randomness”—quantum indeterminacy. But Einstein never liked randomness as an inherent property of nature, and Aharonov wasn’t satisfied either. Newly developed experiments utilizing methods to “weakly measure” particles at one point in time and then conventionally measure a subset of them at a second, later point in time—or “post-selection”—are showing Aharonov was right and that Einstein’s intuitions were on the mark: God really doesn’t play dice; he’s truly a master archer instead, a divine Legolas who can swiftly turn and shoot causal arrows in both directions. Every interaction a particle has with its environment or with an experimental measurement apparatus perturbs seemingly “random” aspects of its behavior, such as its spin, at earlier points in its history. In 2009, a team at Rochester University actually used measurement of a portion of a laser beam at time point B (post-selection) to deviate those photons when measured, weakly enough to not disturb them too much, at an earlier time point A—retrocausation, in other words. 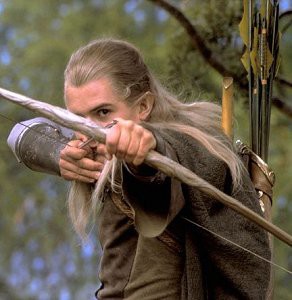 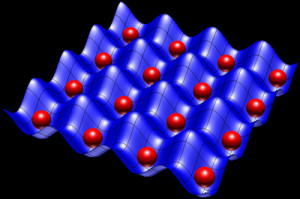 Basically, a quantum computer is a lattice or matrix of quantum-coherent atoms or particles. The most famous property of quantum computers is their greatly enhanced capacity for complex calculation by using the magic of superposition; the computer can simultaneously take multiple paths to the right answer to a problem. But increasingly it is becoming clear that quantum coherence is the same thing as entanglement ; and one property of entanglement is that, insofar as entangled particles are sequestered from outside interference, time is irrelevant to the system: A measurement of one particle or atom affects its entangled partners instantaneously. Theoretically, using post-selection and weak measurement, you can even send information into a quantum computer’s past. In a previous post I described one method for doing this devised by Seth Lloyd, using quantum teleportation—essentially a version of “quantum tunneling” in the temporal rather than spatial dimension. But there may be even simpler ways of achieving this, along the lines of the Rochester experiment.
Conceptually, it is not unlike a simple eye, but in the time dimension instead of space.
Imaging the Future
Consider the most basic type of eye in the animal kingdom: an enclosed pit with a photoreceptive retina at the bottom. In the absence of such a pit, there is very little a photoreceptor array can determine about the environment: It can tell you the presence of light and its intensity or frequency, but it cannot “image” the environment. This is a bit analogous to how the back-flowing influence of future interactions is interpreted by us as randomness or chance—generally we can’t say anything more specific about it, so it appears as a kind of noise that, at most, can be quantified (i.e., probability).
No grandfathers were harmed in the making of this precognitive biological guidance system.
But when you do what evolution gradually did (many, many independent times), which is set photoreceptors inside a recess that is mostly enclosed except for a small pupil-like opening overhead, akin to the aperture in a camera, you actually gain much more information from the in-falling light even though you have eliminated most of that light in doing so. Even in the absence of a magnifying lens (which came later and improves the photon-gathering capacity), a narrow aperture acts as a pinhole camera to project an inverted image onto the photoreceptive cells. All the sudden, you have the ability to capture a picture, a re-presentation, of what is outside in the environment, such as a predator or prey. 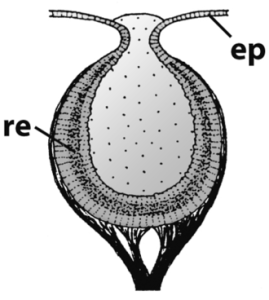 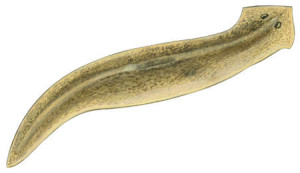 Peering into my future-scope, I can see that “post-selection,” the causal Darwinism that makes the time eye possible without paradox, is going to be the concept du jour of the next decade, the way Gleick’s “butterfly effect” was the concept du jour of the late 1980s. Maybe they will call it the “planarian effect,” for the way a loud noise at 3:00 PM affects the waggle of a worm at 2:59.*
NOTE:
*The previous most interesting discovery about planarian worms was made by memory researcher James McConnell back in the 1960s: If you subject one planarian worm to conditioned learning, then grind it up and feed it to another unconditioned worm, the cannibal worm acquires the first worm’s memories (see “[url=http://mypage.siu.edu/gmrose/Media/570q/McConnell 1962.pdf]Memory Transfer Through Cannibalism in Planarians[/url]“). Don’t try this at home. Unfortunately, McConnell’s methods and findings were subsequently criticized, but recent studies do show that decapitated planarians can grow new heads with their old memories intact, suggesting that their memories may indeed somehow be chemically rather than neuronally encoded, and not entirely in their wee brains. 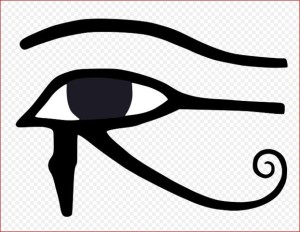 OUT OF MIND » PERCEPTUAL AWARENESS » INFORMATIVE GUIDES FOR THE SHIFT IN CONSCIOUSNESS » The Time Eye: Nuts and Bolts of a Biological Future Detector