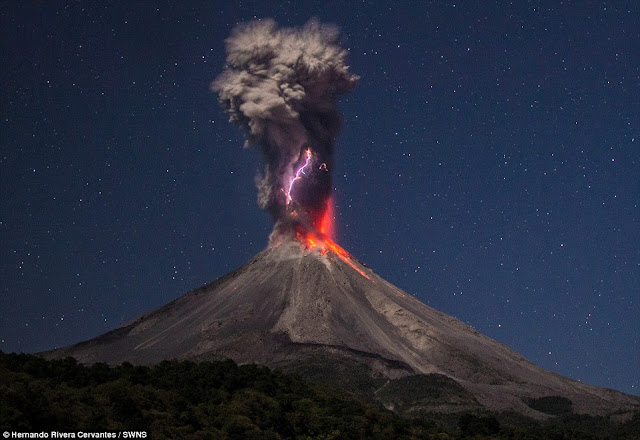 The slowly-erupting Colima volcano in Mexico has spectacularly started spewing lava, sending a huge column of smoke and ash high into the air.
One of the most active volcanoes in North America, the Colima volcano has been slowly erupting since early September.
A particularly spectacular eruption in October led to the evacuation of 300 people.
The 3,839-meter mountain produced another series of remarkable eruptions on Friday and Saturday, sending lava cascading down its slopes and belching a column of smoke 1,000 meters into the air. The region's local website said that the lava flow now extends to 1,700 meters in length.
Based on recent activity, the State Civil Protection Unit broadened the exclusion zone to 12km on one side of the mountain and maintained the 8km zone in other areas.
It also recommend that people avoid travelling close to the volcano and, for those who have, cover their noses and mouths.
People living in the foothills of the mountain are advised to keep windows and doors shut, cover water tanks, avoid driving if possible and drive with the headlights on if they must drive.
People with respiratory problems are being told to avoid going outside.
The volcano, which is also called the Volcan de Fuego, has produced several dramatic eruptions in 2016. Perhaps the most violent of these came in February when it shot pillars of ash 10,000 feet into the sky.