The following images taken with a cell phone on July 9, 2016 show a decloaking UFO in a weird shaped rainbow cloud over Washougal, WA. 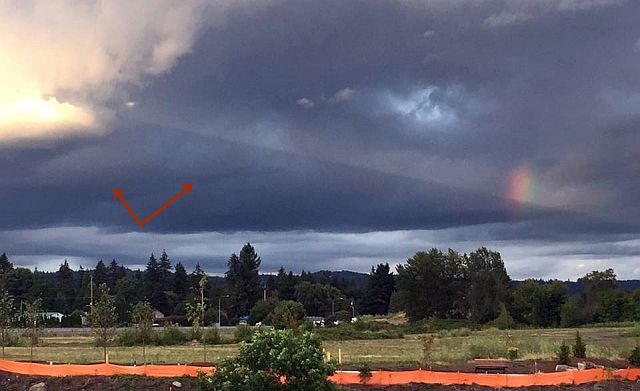 The photographer of the amazing images states: There are two witnesses including myself: Both professional and credible, one an engineer with academics US Air Force Academy (engineering) and Washington (Seattle), the other from University Of California.

One hour before the event we noticed some weird clouds so we decided to take some pictures. We then went to store and on return an hour later we noticed the weird clouds again but now from a marina 5 miles away.

We stopped to take more pictures as now two short and strange colored rainbows were a part of the scenarios. One rainbow is easily visible in the images.

Started taking pictures and within a 2 second window the clouds open up (cloak lost?), and you see what we saw...one witness almost fainted. 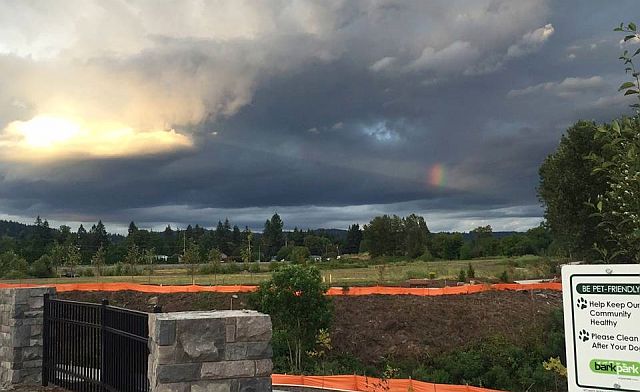 In person you could see that object was huge, and that pictures might only be seeing the bottom half of this "pyramid” on a side with sharp edges, but we could see relief and contours (vents, windows, appendages, etc.).

It was about 5 miles away, seemed like 5 miles wide by 8 miles long, the visible part, and there are no mountains even close to this area like that.

We watched for 15 minutes and it soon became cloaked again 20 minutes later but we did not see that actually occur. Mufon case 82110.