Many people throughout the world have captured images of strange looking UFO-shaped clouds.

The impressive thing is that, while in most cases the weird phenomenon can be explained as ordinary clouds, there are special clouds that seemed to be made artificially. 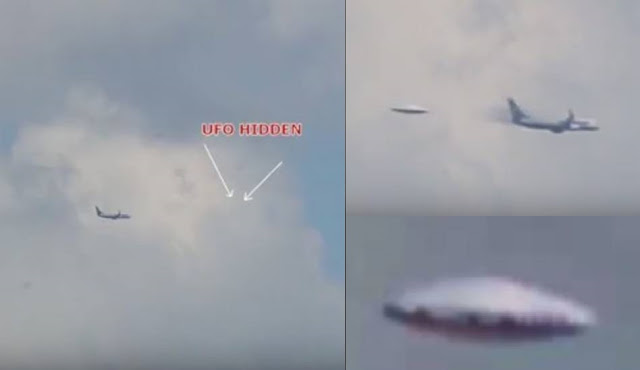 UFO-hunters are convinced that UFO’s are hidden inside these special cloud formations to monitor us.

The video below is an interesting compilation of UFO’s who have camouflaged their self inside unnatural looking cloud formations, including a flying saucer emerging from a cloud. Montreal, Canada - 07-22-17
Green illuminated shape seen above Montreal, Quebec, Canada.
I would like to report an unusual sight in the skies above Montreal, Quebec, Canada, on the night of 22 July 2017.
At approximately 10:15pm, three of us were on the 9th floor common roof-deck of a high-rise condo complex. We were there to observe fireworks in the downtown area; these fireworks were, as it happened, low on the horizon and occluded by other buildings.
The sky was generally clear, with a few long & wide “contrail-like” clouds present.
After a few minutes of watching the skyline, etc., we looked directly overhead and saw the following phenomena. We saw a grouping of small white cloudlets within an elliptical patch of sky, whose long dimension was approximately equivalent to 5” held at arm’s length.
Within that grouping was an illuminated “v” shape, about ½” at arm’s length in extent, with the arms of the “v” consisting of a number of bright “pinpoint” emerald green lights, each surrounded by small halos.
The shape and distribution of lights (which appeared quite definitely organized or “non-random” to us) remained stationary, as far as we could tell.
A we watched the “v” shape, we saw it gradually fade away. Then, to one side of its location, but also within the elliptical patch of white cloudlets, we noticed a faint white line, extremely linear and precise, and stationary in the sky, with an extent of about 1” at arm’s length.
This white line, and the surrounding patch of cloudlets, then faded entirely from view; that is to say, it did not disperse or drift away.
The duration of this sighting was approximately 45 seconds.
At various times before and after the sighting, we noticed low light-aircraft above Montreal; in addition, a rotating searchlight/beacon was operating from one of the downtown highrises. Regardless, the phenomenon we observed bore no relationship to these other light sources, nor to the distant fireworks.
And incidentally, we noticed that smoke from the low fireworks simply drifted with the wind, and did not fade out.
Lastly, one of us (me) waited for clouds to drift into the area directly overhead, where we’d seen the phenomena, to see if some local ground-based illumination might have been the culprit; but I saw nothing of the sort.
For whatever it’s worth, I myself am a PhD physicist (particle physics), 58 years of age.
((NUFORC Note: We have corresponded with the witness, and he seems to us to be quite sincere, and sober-minded. We plan to invite him to submit an illustration of what it was he witnessed. PD))
Thanks to: http://www.ufocasebook.com