OUT OF MIND » THE INSANITY OF REALITY » CABAL AGENDA & WORLD DOMINATION » Vatican Diplomat in D.C. Allowed to Flee to Church to Avoid Prosecution

Vatican Diplomat in D.C. Allowed to Flee to Church to Avoid Prosecution 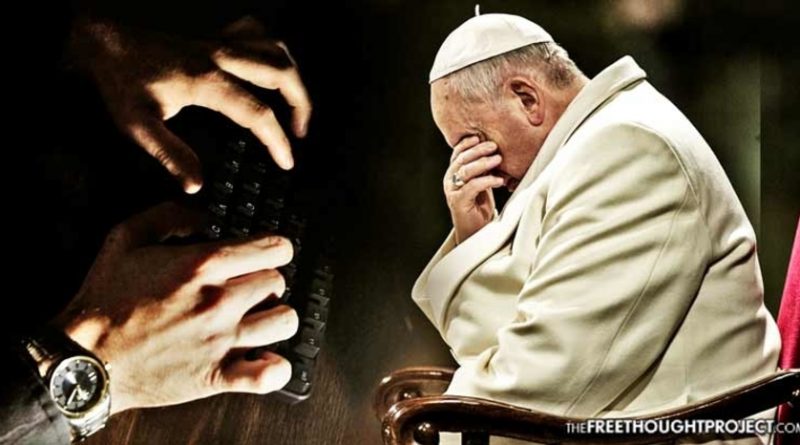 September 17, 2017 renegade
By Jack Burns
The Vatican embassy in Washington D.C. has four diplomatic staff, and it is now admitting that at least one diplomat has been found with child pornography—but the church will not allow him to be prosecuted.
As a diplomat, the unidentified priest has immunity from prosecution for most crimes under the Vienna Convention. The State Department requested that the Vatican waive immunity so that the individual could be properly prosecuted on Aug. 21. Instead of allowing the priest to be charged, tried and potentially convicted of possession of child pornography, the Vatican recalled him . In other words, the Vatican protected the priest from prosecution.
According to the Associated Press , “The Vatican declined to identify the priest, but said he was currently in Vatican City and that Vatican prosecutors had launched their own probe.” Going further, the AP wrote, “The State Department said it had asked the Vatican to lift the official’s diplomatic immunity on Aug. 21. It said that request was denied three days later. For the State Department to make such a request, its lawyers would have needed to be convinced that there was reasonable cause for criminal prosecution.”
Possession of child pornography was made illegal in 2013  under the Vatican’s criminal code. If found guilty, the Vatican can sentence the high-ranking priest to up to two years  and a fine of 10,000 Euros, which is quite a contrast from the sentence of 15 to 30 years in prison  as well as steep fines in the U.S.
The decision to recall the priest has several American Catholic leaders up in arms, protesting the Vatican’s decision to disallow him from being prosecuted. The head of the U.S. Conference of Catholic Bishops, Cardinal Daniel N. DiNardo of Galveston-Houston, was cited by the Globe and Mail  as describing the allegations as “serious.” He said the Vatican should be “forthcoming with more details.”
“We reaffirm that when such allegations occur, an immediate, thorough and transparent investigation should begin in co-operation with law enforcement and immediate steps be taken to protect children,” DiNardo said in a statement.
Pope Francis has been less than truthful with his promise of zero tolerance for child rapists, predators, pedophiles and sex offenders. In February, as TFTP reported , he quietly reduced sanctions against some Catholic priests who were seeking mercy from the church.
Then in May, the pope acknowledged there was a backlog of 2,000 cases of alleged abuse  that were not being addressed as quickly as some advocates for children would like to see occur in a more expeditious manner. The acknowledgement comes just a few months after Marie Collins, an Irish pedophile-priest-sex-abuse-survivor, resigned from Pope Francis’ sex abuse advisory commission. She resigned amid “unacceptable” levels of resistance from the Vatican in helping to prosecute pedophile priests.
The practice of pedophilia rises all the way up to the highest levels of the Catholic church with the highest profile arrest of the pope’s own chief financial advisor being the latest brought up on charges. Cardinal George Pell  was brought up on charges in late June 2017 for “historical sexual assault offenses” dating back to 1961 when Pell was a trainee priest.
However, if you believe Pope Francis, only 2 percent of Catholic priests are pedophiles. With as much obstruction, denial, disinterest, exoneration, and mercy being shown to pedophile priests by the Vatican, it is easy for anyone to see how he might arrive at such a low number. It is likely only officially 2 percent because the church still refuses to allow full transparency to take place when it comes to allegations of child sex abuse involving their priests.

OUT OF MIND » THE INSANITY OF REALITY » CABAL AGENDA & WORLD DOMINATION » Vatican Diplomat in D.C. Allowed to Flee to Church to Avoid Prosecution