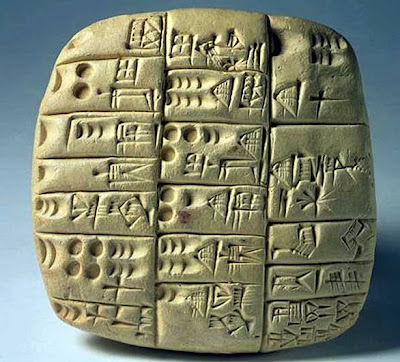 This is a story that, as one might imagine, I cannot help but speculate about. It was shared by Ms. M.W. The story itself contains a number of statements I find intriguing, if not downright provocative and suggestive:
Stolen Sumerian Tablets Come from the Lost City of Irisagrig
There's so much potential for speculation here that I hardly know where to begin. Suppose we start here: the tablets, which were purchased by Hobby Lobby, and later discovered to have been stolen, are being returned to Iraq, and presumably, to the Baghdad Museum (we'll get back to that interesting connection later). What's intriguing here is the content of the tablets:

Hundreds of 4,000 year old tablets that were looted in Iraq and bought by the U.S. company Hobby Lobby seem to hail from a mysterious Sumerian city whose whereabouts are unknown, a U.S. law enforcement agency just announced.
The tablets are part of a cache of thousands of looted artifacts purchased by Hobby Lobby and seized by the U.S. government. They are now set to be returned to Iraq.
Of the 450 cuneiform tablets in that haul, many came from an ancient city called Irisagrig, U.S. Immigration and Customs Enforcements said in a statement. Many of these tablets date from between 2100 B.C. and 1600 B.C., the statement said. Most of them are legal or administrative texts– meaning that they contain records such as contracts and inventories of goods that made it easier for private citizens and the city’s government to run their affairs – while a few contain a form of magical spells called incantations, the statement said. (Emphasis added)

Now, what struck me here were two things: firstly, we are not told from whence in Iraq these tablets were stolen from that country, nor are we informed who stole them, nor how, nor how Hobby Lobby ended up at the receiving end of the line. More mysteriously, the tablets were supposedly from an ancient city whose current location is unknown. Now, as one can imagine, it's that last detail that suggests to me that these tablets may be part of the original haul from the infamous Baghdad Museum looting incident. If they are from an unknown city and part of the Baghdad Museum looting haul, then again, as I have pointed out in various books and blogs over the years, this means that whoever knew of their existence were probably members of the French and/or German archaeological teams that Saddam Hussein had scattered around his country, digging up ancient sites. My point is that someone knows where these tablets came from, and where that ancient site is, and it's probably not the American authorities that discovered these tablets.
The second thing that leaped off the page was not the fact that most of these tablets appear to be records of some sort - bland bureaucratic reports and memos, so to speak - but rather that a few of them concerned Mesopotamian magic, and these I suspect - if Hobby Lobby knew of the contents of the tablets prior to its purchase - were probably the real focus of their interest. Even if not, I suspect that this content was the real focus of interest in the US government returning the tablets to Iraq, for effectively, this removes their contents from public view (and of course, it must be mentioned that Hobby Lobby may have made copies of the tablets, and had them privately translated.)
It's that "removal from view" that intrigues me no end; the article itself points out that this is a concern:

Not all scholars agree that the artifacts should be returned right away. "If these tablets are returned and if they are from Irisagrig, it will be a great tragedy for scholarship that they will not be published before they are returned," said David Owen, a professor of Near Eastern Studies at Cornell University. Owen has published a number of scientific papers describing tablets from Irisagrig, but has not worked with Hobby Lobby and has not studied the seized texts.
"Once they enter the bowels of the Iraq Museum, it is unlikely scholars will ever have acccess to them, nor are there any Iraqi scholars capable of publishing them given the many thousands of unpublished texts already in storage in the museum for generations and mostly inaccessible to scholars," Owen told Live Science.
Owen added, "Our government should, first and foremost, make sure all artifacts are recorded and published before repatriation. This would be of great benefit not only to scholarship but also to the Iraqis who do not have the resources to publish these texts. Anything less is a travesty."(Emphases added)

Yes, you read that correctly: the current public policy is that the tablets are not recorded, and hence scholars may not translate them, but they're simply returned to the Baghdad Museum where, we're told, they languish far removed from the sight of translators.
You can guess, I imagine, what my high octane speculation of the day is: (1) these tablets are being kept far away from the prying eyes of the amateur and professional scholar and translator, but I also strongly believe that (2) a very private and perhaps very covert effort is being made to inventory and translate these tablets. After all, the Museum was looted once, it can be looted again, and objects returned before anyone notices they're missing. And with today's compliant media, the story can be kept out of the public eye. For that matter, groups like Hobby Lobby themselves can easily copy and translate - far from prying public eyes - such tablets. Indeed, as we know, corporations and art dealers can also be cutouts for even deeper players. Not for a moment do I believe that somewhere during the process of the return of these tablets photocopies were not made: they're out there, somewhere, and someone is translating them.
So to put it country simple, I still think something is going on with the Baghdad Museum looting story, and yes, I even suspect that at a very deep level, this is related to what is going on in Syria and Iran as well... they're looking for something.
See you on the flip side...