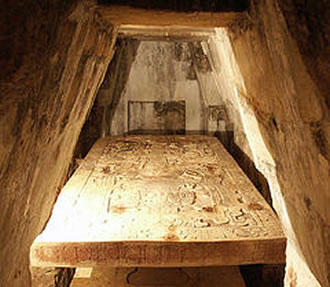 
Patreon: https://www.patreon.com/MysteryHistory Facebook: https://www.facebook.com/MysteryHisto... Twitter: https://twitter.com/Mysterytweetery Steemit: https://steemit.com/@mysteryhistory Narration By Don Moffit: www.DonMoffit.com K'inich Janaab Pakal the first, was known by many names, Pacal, Pacal the Great, 8 Ahau, Sun Shield, the list goes on. He was the leader of the Maya city-state of Palenque, and, according to academia, this rule, and the subsequent exquisite ruins left by his reign, occurred within the Late Classic period of Mesoamerican chronology. Undoubtedly the most astonishing relic left by this past king, and the artefact which has fuelled countless ancient astronaut theories, is the casing stone found atop his tomb. Clearly depicting some form of advanced machine, yet the question has persisted, what was type of machine? Or indeed, what was its past function? Are we peering upon a schematic for an ancient spacecraft? Why would a king, that we feel is clearly from a lost civilisation, go to such considerable effort having this contraption, depicted upon his burial chamber? Before his name was securely deciphered, from extant Maya inscriptions, only within the last few decades may I add, little was known of this intriguing ruler. He had been known by an assortment of nicknames, and we find it interesting that regardless of the clearly advanced knowledge, bestowed within the ancient constructions of such sites, academics continue to create suspiciously complete timelines, surrounding these structures, their rulers, and even dating the builds, yet their explanations as to how these tasks were completed, are utterly absent from the thousands of books, written, funded, supported and published by this selected group of influential individuals. However during our own research, we have found a compelling lead regarding this ancient site. A set of images, purportedly showing an artefact once found beneath Pakals tomb. And although we have been unsuccessful, in finding anymore photography of the artefact, we have found out where it is currently being held… The Mexican National Museum. What makes this particular artefact so compelling to us, is its resemblance to rocket thrusters, its deliberately sculpted shape is uncanny of “a three cone rocket,” and was clearly not intended to be an ornament with such an awkward form. This artefact, if indeed depicting some form of ancient thruster, throws up some rather controversial, yet astonishing questions. Is it a mere basalt sculpture? Or is it actually made from some form of metal? Was this artefact created by Pakal? Was it his idea? Or was it a craft that his people found, and subsequently brought to him? A vessel Pakal attempts to depict on the case of his tomb? According to the very limited information we were able to extrapolate from the web, it is being housed within the bowls of the Mexican national museum. We are unfortunately yet to find anymore pictures, of this clearly compellingly shaped artefact, that was once found beneath a tomb many feel, actually depicts a space going craft… Why has there not been more heard of this intriguing artefact? Is it being hidden by the Mexican government. We find the shape of this artefact, it’s found location, and its clear academic illusiveness, as, highly compelling. http://www.forumishqiptar.com/attachm... http://s1.e-monsite.com/2009/01/07/12... https://en.wikipedia.org/wiki/K%27ini...