OUT OF MIND » DISCLOSURE » HISTORIES MYSTERIES » The Dwarfie Stane ~ Built By Ancient Dwarfs? 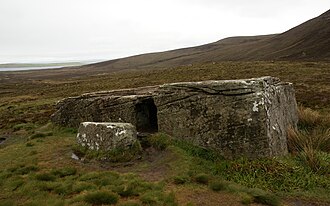 
Support Our Fight Against Academic Fallacies: Patreon: https://www.patreon.com/MysteryHistory Facebook: https://www.facebook.com/MysteryHisto... Twitter: https://twitter.com/Mysterytweetery Steemit: https://steemit.com/@mysteryhistory Narration By Don Moffit: www.DonMoffit.com The islands of Orkney, a mysterious place, with an equally mysterious ancient past. We have previously covered the astonishing mound, that can be found upon mainland Orkney, known as MaesHowe. This astonishing earthwork of gigantic proportions, an ancient site made from enormous ancient megalithic blocks, which although mostly hidden under many hundreds of tons of earth, protecting the site, and unquestionably aiding in its preservation into modern times, the entrance stones are exposed, visible for all the world to see. Although modern academia, along with the thousands of people who visit the site each year, seemingly overlook this astonishing fact of the structure, or are simply unaware of the mammoth undertaking, the transportation, and original placement of these stones would have been. Not only is the movement of these stones, according to the age of the site, and indeed current academic study unexplainable, their perfect alignment with the winter solstice, is yet another factor, which not only makes the site a baffling location for modern man to explain,,, but we believe,, makes it a strong piece of evidence to suggest the existence of a past, highly knowledgeable, highly advanced civilisation, that once flourished here on our planet. And Maeshowe is not the only astonishing, baffling, and as yet, unexplained ruin which can be found within Orkney. Dwarfie Stane, is yet another of these mysterious ruins, that due to the astonishing size of its megalithic stone structure, has survived the aeons. Yet unfortunately, regardless of its clear historical importance, due to its inexplicable nature, is ignored by an academia, who simply cannot explain its origins. It is a megalithic chambered stone, that has predictably been attributed to having once been a tomb, this identification of a “tomb,” is commonplace within academic circles, an occurrence that can be found describing countless, unexplained sites, all over the world. We postulate however, the fact that many ancient remains, of more recent historical figures, have indeed been found in many of these attributed ancient structures, this is merely a result of their astonishing nature, and as such, the past controlling parties of the lands they are found within, selected these miraculous sites as their places of burial. Rather than them actually being those responsible, for the building of the structures. R. Castleden a popular academic author of historical study, refers to the Dwarfie Stane as representing quote, "the imported idea of the rock-cut tomb, that was tried once and found to be unsatisfactory" end quote, he presumes this dissatisfaction of a more modern constructor, be due to the hardness of the Old Red Sandstone. We however disagree with this hypothesis for several, we feel, obvious reasons, firstly, there is no direct evidence linking the site, to any builders of Mediterranean rock-cut tombs. Secondly, the size of the megalithic block involved in the construction, and indeed the hardness of the stone that was selected to create the structure, is indicative of a lost civilisation’s workmanship. This is due to the fact that the closing stone, would not have been a viable size for any of our well-studied ancient ancestors, to have used, worked or moved. Why would they choose to make a closing stone of such gigantic proportions? And thirdly, why would they have gone to such effort in carving the build, from one a single stone of notorious toughness, with the tools they had at their disposal? All the other, we feel, more recently created tombs found in the area, are not only vastly different from Dwarfie Stane, but were created with blocks of a far smaller size, as such, would have been far easier to work with, and thus, are far more logically explained as our primitive ancestors work. The name of the structure is derived from a local legend, stating a dwarf named “Trollid” once lived there, although, other legends claim it to have once been the work of giants. We will let you come to your own conclusions, as to which legend would fit most accurately. Undoubtedly an astonishing ancient ruin, one that due to its incredible size, has survived the aeons to the modern day, allowing inquisitive individuals to ponder over its origins, and indeed original constructors. It is undoubtedly, highly compelling. http://www.orkneyjar.com/history/tomb... https://en.wikipedia.org/wiki/Dwarfie...

OUT OF MIND » DISCLOSURE » HISTORIES MYSTERIES » The Dwarfie Stane ~ Built By Ancient Dwarfs?