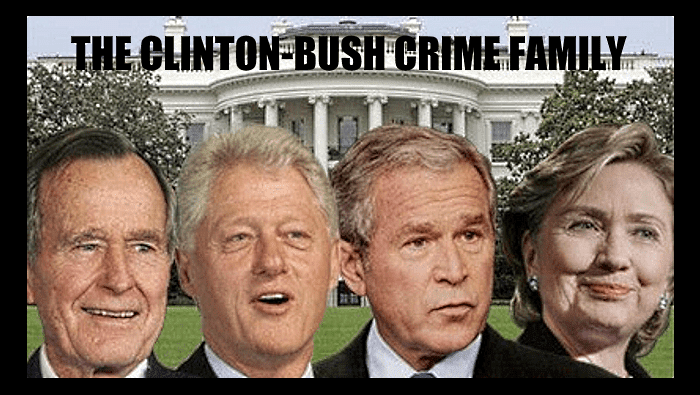 The Globalist lineage of the Bush Crime Family goes back to Samuel P. Bush, grandfather of the recently deceased George Herbert Walker Bush and lifelong associate of the Rockefeller s and the Harrimans, in the railroad and banking industries and as a board member of the Federal Reserve Bank of Cleveland.
When his son, Prescott Bush wasn’t investing the funds of Nazi financier Fritz Thyssen at his Wall Street firm, he was leading a group of wealthy industrialists in the 1934 attempted coup d’état against Franklin Delano Roosevelt.
The “Business Plot” coup was quashed by Marine Corps General Smedley Butler, who wrote the book, War is a Racket, in which he described this criminal corporatist element within the US, of which four generations of the Bush family have been exponents. They skated in the 1930s and skated again, in the 2000s, when they hatched the 9/11 plot and took profits from the massive war economy that they’d created with no-bid contracts.
Over the course of three decades, the Bushes and Clintons worked like a fine-tuned tag team, setting up China to become the next global superpower. Though ostensibly political rivals, the Clintons had been inducted into the Bush crime family during the 1980s, when a small airfield in Mena, Arkansas was used in the transport of CIA cocaine.
Prior to his appointment as Director of the CIA, Bush Senior was made Chief of the US Liaison Office in Beijing in 1974. This was during the era just before formal diplomatic relations were established between the US the Communist Chinese government.
In 1993, Bill Clinton granted “Most Favored Nation” status to China, paving the way for the wholesale offshoring of US manufacturing.
During the Obama Administration, Hillary Clinton’s infamous homebrew server was intentionally left open to hacking, in order to allow the Chinese penetration that obtained a copy of nearly all of her emails during her tenure as Secretary of State.
This is but the most infinitesimal tip of the iceberg of the drug-dealing, warmongering, Globalist-grifting and depraved criminality practised by this junta. No members of the Bush-Clinton Crime Family have been charged for their endless felonies and treason. Is this about to change?