By getting natives in every nation on Earth to repudiate their citizenships, Anna Von Reitz is decreasing the liabilities and increasing the profits for the de facto foreign owned crime syndicates.

Federal Statutes for every nation forbid each nation's crime syndicate from communicating & having business with non-fictional entities (in other words the "United States Inc," foreign owned corporation can only have comms and business dealings with, "Corporations.") which means as soon as you dissolve "YOUR CORPORATION," by repudiating your U.S. Citizenship (or your citizenship of wherever you live) the foreign owned corporation enslaving you, example being, "United States Inc," can now pretend you do not exist, and is forbid from even communicating with you.

We do not need to repudiate our citizenships in order to "peaceably assemble" as protected by our Bill of Rights, and its First Amendment.

The American Forefathers and the Framers were also unlawfully converted into corporations by the British & French & Spanish parent corporations, nothing new since ancient Rome enslaved the world, which Rome still is doing today, as the Vatican owns everything (not Payseur as Qanon says).

Here is the sting operation that exposed Anna Von Reitz as a Cabal operative (although many Anons knew for a very long time):
http://nesaranews.blogspot.com/2019/03/anna-von-reitz-soaring-spirit-sting.html 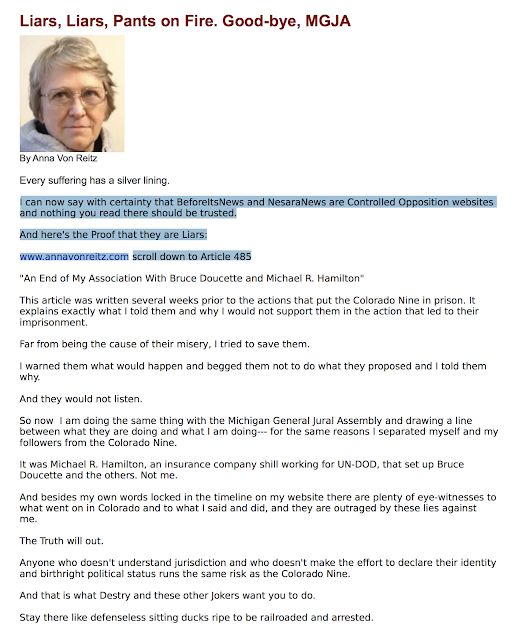 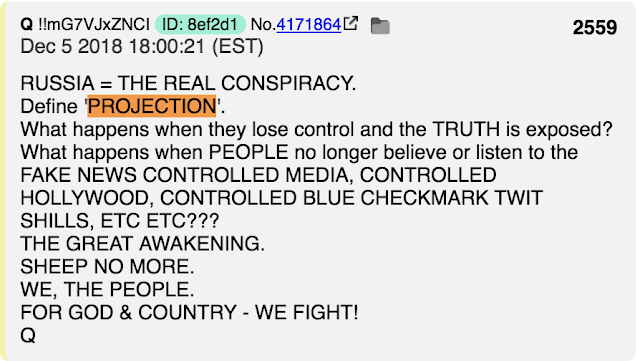 Anna Von Reitz projects false truths on others, to protect the exposed truths about her.

What is the penalty for Treason Anna?  You should know, GITMO will be your home soon.

Define Projection:
The attribution of one's own ideas, feelings or attitudes to other people or to objects; ESPECIALLY: THE EXTERNALIZATION OF BLAME, GUILT, OR RESPONSIBILITY AS A DEFENSE AGAINST ANXIETY.

Define Psychological Projection:
"in Psychology, the theory describing how the human ego defends itself against unconscious impulses or qualities (both positive & negative) by denying their existence in themselves while attributing them to others."

Even if what Anna say is TRUE (which it is not) in her "Psychological Projection"(Anna's article above), then Anna Von Reitz would still be a horrible teacher of disinformation for teaching her 9 Colorado students to use the title Judge, which got them arrested and imprisoned, by the foreign owned de facto crime syndicate corporation, "United States Inc."  So it is obvious that Anna is either spreading disinformation (bad information being taught) or she is a lier, NEITHER ARE GOOD, and if you've read about the sting operation (link provided again below:) then you know the truth is BOTH, Anna Von Reitz is both a LIER and a purveyor of FALSE INFORMATION.

Anna, whatever the Cabal has on you.  Just come clean with us, and cease your attacks against the Jural Assemblies.  Anna, you are attacking the very fabric that our Founding American Forefathers wove in order to kick KING GEORGE out of America, do you really want to be remembered as one of the biggest TRAITORS ever in the history of our nation, and the of the world?

Cease your attacks, desist your purveying of damaging(deadly) instructions (U.S. Citizenship Repudiation) that will cause every one of your victims to end up under a bridge or in a jail cell, destitute, without a bank account, arrested every time they drive, and instead, aid us (Jural Assemblies) in understanding who your handlers are so that they can be brought to justice.

Anna, do this, and all will be forgiven, for we all understand that the Crime Syndicate is very convincing through their threats to life, liberty, and pursuit of happiness, the Cabal wields evil to enslave, we can forgive you, if you can forgive yourself, and then Anna, you must speedily come to aid the forces of light against PURE EVIL.

These questions have been asked of Anna by some white hat feds some time ago and she has failed to answer them. These questions are valid and remain unanswered. Passed to me through a couple acquaintances. Will she answer?

Who swore you in as Judge? - please provide doc

What oath did you take? and please provide a copy

By what authority has made your husband Head of State?

What impact did the 1783 Treaty of Peace have for We the People being recognized as sovereign people?

What impact did the 1st Act of Congress 1789 have on the oath of office?

What have you accomplished for the people of your home state Alaska?
Posted by Freewill   at 6:11:00 PM

Anna Von Reitz - How to know she is a FRAUD, FAKE JUDGE, PHONY, & Crime Syndicate Operative

Anna Von Reitz is another HERO put in place by the Crime Syndicate to keep you sitting firmly planted on your fat rumps.

She tells you that she & the "Living Law Firm," have filed all these wonderful lawsuits protecting your NAME, INHERITANCE & REPUBLIC.

WHERE are these documents?

DATES:
You would think that a "JUDGE" would know the importance of keeping A RECORD, and that a Judge, would put dates on her documents:

Anna Von Reitz does not use dates, on purpose.  Just like she does not show you all these magical documents that she and the LYING LIE FIRM have filed for you to protect your assets and your Republic.

Anna Von Reitz, an employee of the one and only, CRIME SYNDICATE!

Do you see any dates? 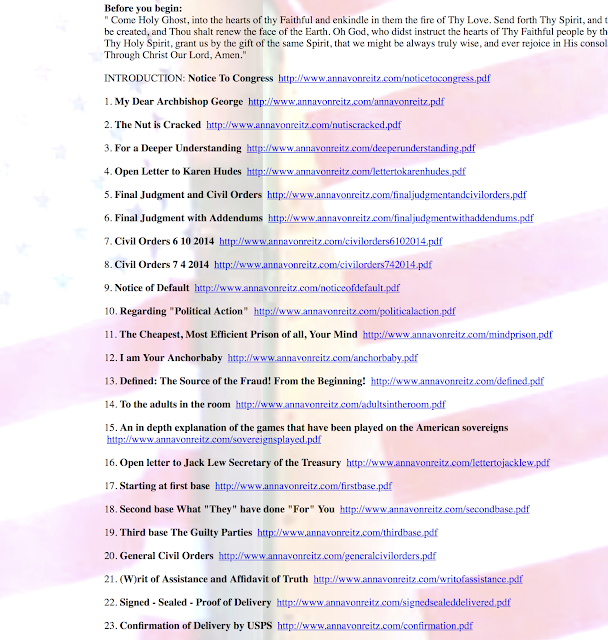 No, I do not see any dates. 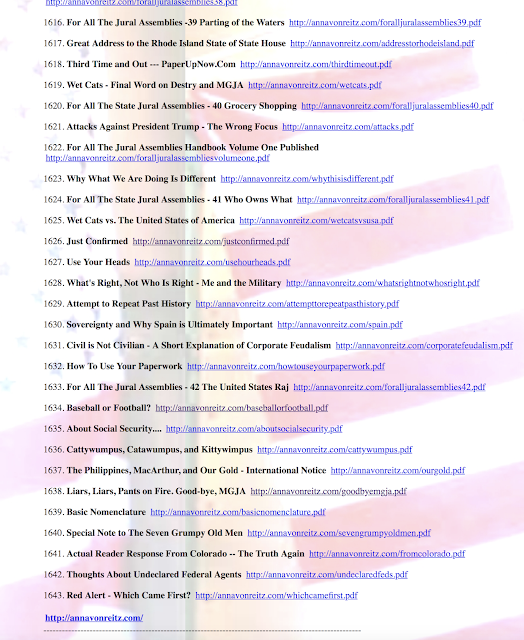 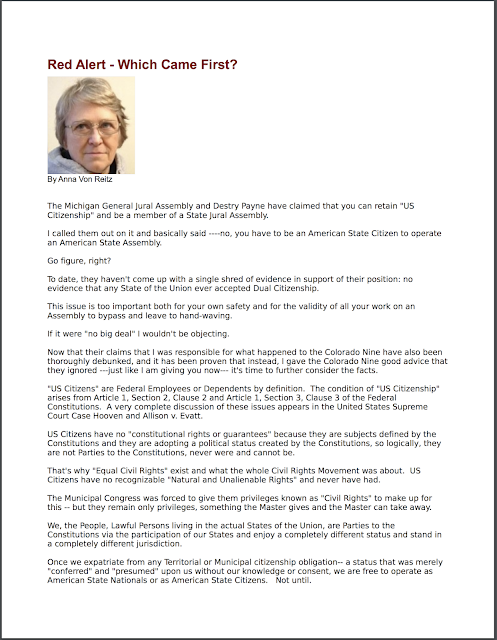 Nope, I don't see any dates here either. 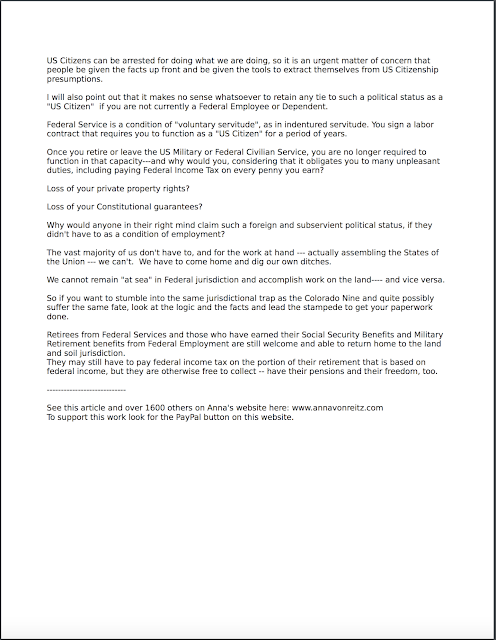 No DATES!
Why no dates?
So no one can argue with her?

Anna Von Reitz is a lier and a fraud, she wants you to go commit suicide by rescinding & repudiating your Citizenship.  If you would like to know what life is like without a driver's license, getting arrested every time you drive, thrown in jail for 60 days at a time, or how life will be without a bank account, just ask "Freewill" the owner of Nesara News Blogspot (www.NesaraNews.blogspot.com)
his email is on the homepage.

Anna Von Reitz is not a judge,
She is not a hero,
She is a FRAUD,
Just like Qanon,
Just like Trump,

All designed for one purpose!
To Keep you on your FAT RUMP sitting on your shitty couch, doing nothing but cheering on your favorite FAKE HERO.

The reason all these defamatory hit pieces are suddenly being pelted at me is because I am taking on the corrupt Generals who set up the Nevada Corporation to run the phony UNITED STATES OF AMERICA and who are trying to run another round of the Great Fraud on us.

These --- Sun-Tzu and Destry et alia --- are the guys trying to sell the French Rothschild "Neu Republique" to us---and if they can't sell it honestly, are trying to bring it in the back door. These same bunch of Freebooters have been running all the UN-DOD-NWO scams.


It's not me who is the "Cabal Agent". Remember: it's always the pot calling the kettle black. It's their MO to accuse their enemies of what they are doing themselves.

Just watch and see who the actual Cabal Agents are ---- those who are spreading a LOT of disinfo about me and about other things, too ---- telling Notaries that they could lose non-existent "bonding" if they Witness our expatriation paperwork, telling people that Tim Turner's "Act of State" will protect them, when it didn't protect Tim Turner (he got an 18 year prison sentence because he relied on an "Act of State" he had no capacity to do).

All sorts of crazy crap coming out of those boys now, but manure is manure and it costs those who spread it as well as those who listen to it.


The Thinking People will see the logic and abandon the fake stuff, and all the Dunderheads who can't think beyond their Eighth Grade indoctrination into La-La-Land, will be left behind. I am sorry for them, but--- goats to the left, sheep to the right. It isn't as if I haven't spent eight years trying to educate everyone.