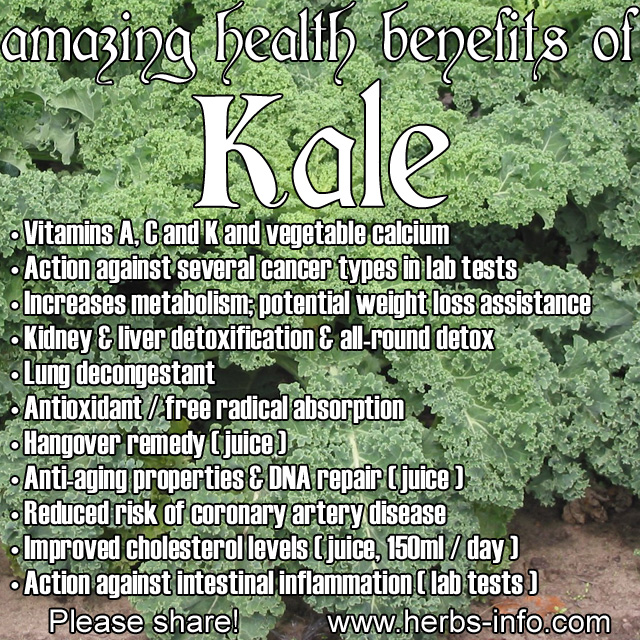 Kale is a vegetable that has a long history of consumption in both Western and Eastern cuisine. Technically related to wild cabbage more closely than the common cabbage typically eaten and found today, kale is also related to a wide range of other leafy veggies, among them brussels sprouts and cauliflower. As a foodstuff, it has been consumed by many cultures, especially Europeans since the early part of the Middle Ages, where it was a chief vegetable most commonly found in stews, soups, and other filling and nourishing soup-based dishes, and prior to that, by the Greeks and Romans who consume it as a salad green in much the same way it is consumed today. Kale is also consumed as a raw food, typically in salads in much the same way as collard greens.
Unlike its relatives cabbage and cauliflower, kale lacks the tightly packed leaf-formations so commonly found in its cousins, and is instead replete somewhat curly or wrinkled appearance. [1]

While kale is strictly a vegetable specifically prepared for human consumption, its long standing use as a food has allotted it several ‘therapeutic’ properties and health benefits as to make it a worthwhile addition to any naturopath or herbalist’s repertoire of healing plants. Unlike herbs which require specified types of preparation (i. e. infusion / decoctions, etc.), one may be able to reap the benefits of kale simply through its integration into one’s diet as a major foodstuff.

Kale is considered to possess many valuable therapeutic properties that, if employed wisely, can benefit one’s health in the long-run. Aside from being a nutritional powerhouse in its own right, packed with beneficial vitamins A , K , C , and other trace vitamins, kale is even an excellent source of vegetable derived calcium . Kale’s true nutritional punch however lies in the fact that it possesses several active beneficial compounds and phytonutrients that are being demonstrated by recent scientific research to protect the body from certain types of diseases. Among these compounds is sulforaphane, a noted anti-cancer compound also found in kale’s cousins. Kale also houses the compound ofindole-3-carbinol, a chemical that helps to prevent cell-damage and facilitate in the rejuvenation and repair of DNA. [1]
When consumed moderately as part of one’s daily diet (preferably lightly steamed than boiled, as boiling results in some minor degradation of some active nutrients found in the vegetable), kale has also be shown to be beneficial for easing lung congestions brought about by sickness or excessive smoking. Kale also possesses potent anti-oxidative and detoxifying abilities, and is perfect for cleansing the body of accumulated toxins. Because of this, kale is a perfect vegetable to consume for individuals who suffer from problems with their kidneys or liver, as well as for individuals who simply want to lose weight, as it actively hastens the body’s metabolic rate by encouraging detoxification. [2]
To employ kale as a medicinal vegetable opens up new byways of culinary experimentation, as kale can be integrated into everything from soups, stews, to salads, and even as a stand-alone medicinal article in its own right.
Used by itself, kale may be consumed par-boiled, steamed, or stir-fried to activate most of the beneficial nutrients housed in the leaf. Kale may also be processed via pureeing or blending to create slushies that make for excellent replacements for caffeine-based energy drinks, or excellent detox drinks during the weekends. In Japan, kale is juiced and made into a healthy, nourishing and revitalizing drink known as aojiru, which was originally a healthful beverage drunk by convalescent individuals, the elderly, very young children, and by individuals whose work-load was higher than most. Aojiru was also said to help combat the side-effects of hangovers, and was drunk at home after parties to preventgrogginess, dizziness, and headaches after a long night of partying. Despite being notoriously unpleasant, kale juice is nevertheless a popular beverage in Japan as it is said to not only encourage longevity, but also help to prevent wrinkling and ageing. [3]

Kale, when eaten as a vegetable or prepared in any other way by itself or in tandem with other beneficial herbs and vegetables is also excellent for lowering one’s cholesterol levels. Being high in fiber, kale also helps to lessen the excess production of bile. Recent studies conducted on the health benefits of the vegetable also yielded surprising results on its anti-carcinogenic properties, citing significant protective capacities for at least five different types of cancer (to boot, that of the colon, prostate, breast, ovary, and bladder). [4]
Unlike herbs which can be dried and stored, kale must always be used fresh, whether consumed raw or partially prepared. Kale makes for the perfect vegetable to add to various dishes, and works best even when combined with other vegetables. Many health food stores have also made pre-made processed kale juice available, so if cooking is something one has very little time or skill for, investing in a few bottles of kale juice per week is worth it.

The extracts derived from both green and red curly kales, as pointed out by the study of Olsen, Grimmer, Aaby, Saha, andBorge (2012), possess antiproliferative action against three human colon cancer cell lines, namely, Caco-2, HT-29, and HCT 116, especially the extracts from fresh plant material. [5]
In addition, glucosinolates and S-methylcysteine sulfoxide, two sulfur-containing phytochemicals found in kale, are reported to possess anticarcinogenic properties. [6] Furthermore, a chlorophyll-rich extract of kale inhibits carcinogen activation and scavenges reactive oxygen species and therefore has both antigenotoxic and antioxidant properties. In the study of Kwon, Yoon, Carter, Bailey, and Dashwood (2006), the chlorophyll-rich methanol extract of kale was deemed efficacious based upon measurements against the following parameters in assays: ferric-reducing or antioxidant power, oxygen radical absorbance capacity, and Fe2+/H2O2-mediated DNA nicking. The extract also manifests protective activities against H2O2-induced genotoxic damage in human HCT116 colon cancer cells. [7] The extract of kale (Brassica oleracea L. var. acephala DC) appears to also significantly increase the glutathione levels and thus to increasecellular antioxidant defenses, as demonstrated by the results of Fernandes et al. (2012). [8]
Kale supplementation in the diet has been implicated to favorably decrease one’s risks of having coronary artery disease. Kim, Yoon, Kwon, Park, and Lee-Kim (2008) investigated the potential of 3-month kale juice supplementation to improve the coronary artery disease risk factors among thirty-two men with hypercholesterolemia (>200 mg/dL) who were asked to consume 150 mL of kale juice daily over a 12-week intervention period. It was found that the serum concentration of high-density lipoprotein (HDL) cholesterol remarkably improved by 27% (p < 0.0001) and the HDL–low-density lipoprotein (LDL) cholesterol ratio significantly increased by 52% (p < 0.0001), with a concomitant reduction in LDL cholesterol concentration by 10% (p = 0.0007) and atherogenic index by 24.2% (p < 0.0001). [9]
Albuquerque et al. (2010) explored the effect of kale and papaya supplementation on trinitrobenzenesulfonic acid–induced colitis in rat models and provided concrete evidence on the prebiotic and anti-inflammatory effects of kale in conjunction with papaya. Additionally, the administration of kale and papaya as a mixture (60% of kale and 40% of papaya) modulated the bacterial flora in both healthy rats and colitic rats in this study and presented intestinal anti-inflammatory effect on the colitic rats, as illustrated by the changes in biochemical parameters utilized such as reduced damage score, downregulated colonic iNOS expression, decreased TNF-α and IL-1β production, and decreased myeloperoxidase activity. [10]