Unvaccinated Children Pose No Risk To Anyone, Says Harvard Immunologist 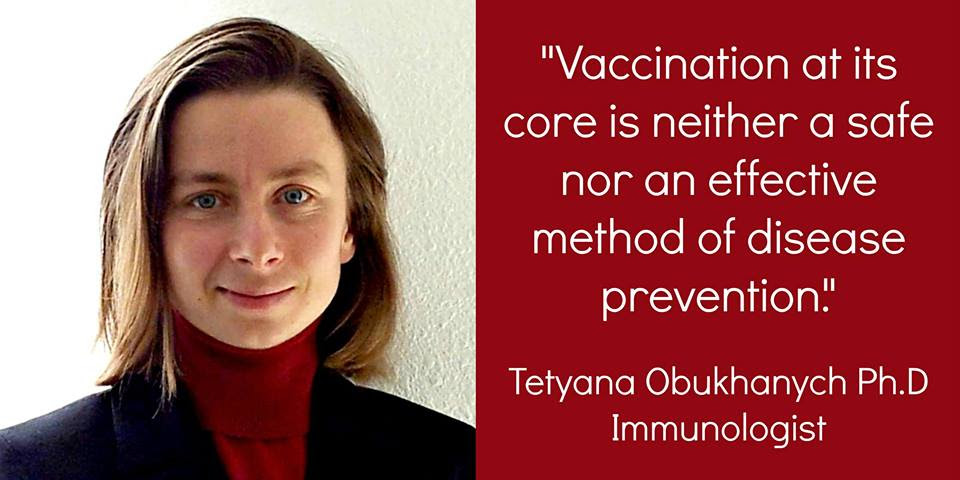 Unvaccinated Children Pose No Risk To Anyone, Says Harvard Immunologist

(Richard Enos ) One of the strengths–and weaknesses–of a Western medical education is its predisposition to break things down and compartmentalize them. While much data is gleaned in the minutiae, very little attention is given to the interrelationship between disciplines. While a medical student may become a true specialist in their field, they too become compartmentalized, and are often ignorant of very important information that would be essential for a broader, more holistic overview. And this appears to be by design.


Source – Collective Evolution
by Richard Enos , March 6th, 2019
A case in point is the testimony of Tetyana Obukhanych, who earned her Ph.D. in Immunology at the Rockefeller University in New York and did post-graduate work at Harvard. In a presentation she delivered in British Columbia (full video here) , she was discussing scientific evidence from a publication dealing with a measles outbreak in Quebec in 2011.  The evidence showed that 48% of those who had contracted measles were fully vaccinated for measles, and this does not even include those who were vaccinated only once for the measles, as they get lumped in with the unvaccinated people. She took a moment to tell a story about how she became aware of this phenomenon:

The interesting thing is that my field, the field of immunology, the basic field that sort of is responsible for all these theories of immunity, we don’t really deal with the real world. We do research in labs. We are sort of an ivory tower profession and we don’t even read these publications because this is too far away from our field. We only read what’s specific to our research and usually it’s immunizations and how antibodies are generated and all the details of the immune responses.
And I went through my whole PhD training and I believed that vaccines give you immunity and that if you got vaccines there is absolutely no way, virtually no way, that you would get a disease, and I’m pretty sure that most of my colleagues in my narrow field believed the same way, and we had conversations about that. And even someone at some point mentioned to me and said that they had a vaccine and they got measles and I sort of brushed it aside and thought that the person is confused. It was either she didn’t have the vaccine or it wasn’t measles, one of the two.

But what happen is that a few years ago I had to apply for American citizenship and part of the procedure is to submit your vaccination records, right, and this was the first time that I looked at my own vaccination records carefully, and I discovered that I had two measles vaccines in my childhood. Well, I didn’t know about it because I was too young to remember, but what I remember really well is that when I was 11 I had measles, and so that was a little bit harder to discount.
And I told recently someone else and they said, ‘Oh, you are confused about that, you didn’t have measles!’ like ‘How do you know?’ ‘Did you check

Let that sink in for a moment. You get your PhD in Immunology, and you leave school to go out into the world to work on things like, oh, immunization, and you haven’t learned that you can still get certain diseases even if you’ve been fully vaccinated against them? Despite this being scientifically documented and an uncontested fact? Again, ignorance by design.

For those medical students who become family doctors or pediatricians, the practice of doing independent research into the readily available scientific evidence that contradicts Western medical orthodoxy is certainly frowned upon. Further, those who wish to employ this knowledge in advising their patients often find themselves in the crosshairs of establishment and pharmaceutical industry condemnation.
One example of this is with the painkiller Vioxx, which by some estimates led to 60,000 deaths, and for which Merck had to pay out almost $5 billion to settle 27,000 lawsuits . Merck emails from 1999 showed that company execs sought to intimidate doctors who disliked using Vioxx, or worse. One email said, “We may need to seek them out and destroy them where they live,” while other emails passed on a list of dissenting doctors who they sought to “destroy,” “neutralize,” or “discredit.”(source )
Now, if doctors began to look into the independent research on vaccines and actually spoke out questioning their safety and effectiveness, they would quickly find themselves on such an industry hit list and risk losing their medical licenses, having their reputations destroyed and perhaps even more.
And that is why challenges to the establishment, like the one being waged by Tetyana Obukhanych, is so important to those of us who are simply looking for the objective facts and a reasonable theory that binds them, especially as it pertains to the safety of our children. Scientists like Tetyana generally don’t have any desire to be activists, they would likely rather do scientific research and have a higher authority act properly upon their findings. However, we live in a time when the medical authority is corrupt and money-driven and wields tremendous power over the government. And so the only way a scientist can get the truth out about their findings is to speak that truth themselves. This often means giving up the quiet and secure life as a researcher that they went to school for and going out into the public as an activist.


Defending The Choice Not To Vaccinate

One of the conclusions that Tetyana has come to after investigating real-world scientific findings on the safety and efficacy of vaccines is that children who have not been vaccinated do not pose any increased risk to public health as compared to vaccinated children. In an ‘Open Letter To Legislators Currently Considering Vaccine Legislation ,’ she argues to legislators, some of whom are poised to remove vaccine exemptions from their districts, that “discrimination in a public school setting against children who are not vaccinated for reasons of conscience is completely unwarranted.” Below is the full letter, and appendices and footnotes are available in the link above.

The average person is not a scientist, and so relies on the integrity of professionals in order to come to decisions about vaccine safety and effectiveness. Those who have done some research may very well agree with me that industry data on the safety of vaccine is presented in vague and complicated ways, replete with repetitive statements that ‘vaccines have been proven to be safe and effective.’ Meanwhile, the alternative data I have seen generally appears to be written in as simple and understandable a form as possible, and the connection between the theory and the data is much clearer. The vaccine ‘debate,’ if we can even call it that, is an opportunity for all of us to practice our discernment, and see telltale signs of the desire to find and share truth versus the desire to hide the truth for the sake of profit and in complete disregard for human life.
For some, this is difficult because it challenges the worldview that the authorities we have given our power to actually care about humanity and human life. But realizing the fallacy of this helps to motivate us to seek our sovereignty from authority, and contributes to our awakening as a collective.

[url=https://www.amazon.com/gp/search/ref=as_li_qf_sp_sr_tl?ie=UTF8&tag=justinnotary-20&keywords=berkey water][/url]
About The Author
Richard Enos
My Master’s thesis on “The Anatomy of Self-Overcoming in Nietzsche” was only the beginning of my journey of exploration into consciousness. I have since lived and taught in Korea, studied yoga in India, written a book entitled “Parables for the New Conversation”, built a film and theater production company (pandorasboxoffice.ca), and started a family. While I endeavor to foster positive change in the world through my works, I hold fast to CE’s maxim ‘Change starts within’. I am humbled and grateful to have joined the CE team as of April 2018 as a contributing writer. You can reach me at richard@collective-evolution.com