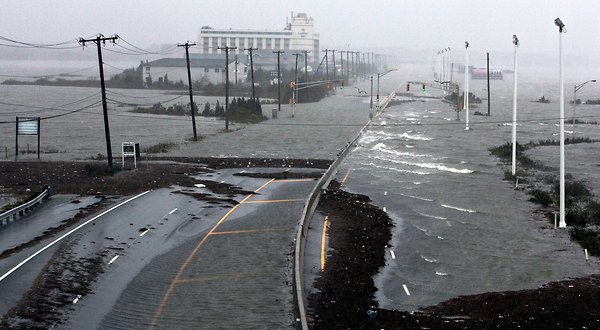 October 30, 2012 – NEW YORK - The
mammoth and merciless storm made landfall near Atlantic City around 8
p.m., with maximum sustained winds of about 80 miles per hour, the
National Hurricane Center said. That was shortly after the center had
reclassified the storm as a post-tropical cyclone, a scientific renaming
that had no bearing on the powerful winds, driving rains and
life-threatening storm surge expected to accompany its push onto land.
The storm had unexpectedly picked up speed as it roared over the
Atlantic Ocean on a slate-gray day and went on to paralyze life for
millions of people in more than a half-dozen states, with extensive
evacuations that turned shorefront neighborhoods into ghost towns. Even
the superintendent of the Statue of Liberty left to ride out the storm
at his mother’s house in New Jersey; he said the statue itself was “high
and dry,” but his house in the shadow of the torch was not. The
wind-driven rain lashed sea walls and protective barriers in places like
Atlantic City, where the Boardwalk was damaged as water forced its way
inland. Foam was spitting, and the sand gave in to the waves along the
beach at Sandy Hook, N.J., at the entrance to New York Harbor. Water was
thigh-high on the streets in Sea Bright, N.J., a three-mile sand-sliver
of a town where the ocean joined the Shrewsbury River. “It’s the worst
I’ve seen,” said David Arnold, watching the storm from his longtime home
in Long Branch, N.J. “The ocean is in the road, there are trees down
everywhere. I’ve never seen it this bad.” The police said a tree fell on
a house in Queens shortly after 7 p.m., killing a 30-year-old man. In
Manhattan a few hours earlier, a construction crane atop one of the
tallest buildings in the city came loose and dangled 80 stories over
West 57th Street, across the street from Carnegie Hall. Soon power was
going out and water was rushing in. Waves topped the sea wall in the
financial district in Manhattan, sending cars floating downstream. West
Street, along the western edge of Lower Manhattan, looked like a river.
The Brooklyn-Battery Tunnel, known officially as the Hugh L. Carey
Tunnel in memory of a former governor, flooded hours after Gov. Andrew
M. Cuomo of New York ordered it closed to traffic. “We could be fishing
out our windows tomorrow,” said Garnett Wilcher, a barber who lives in
the Hammells Houses, a block from the ocean in the Rockaways in Queens.
Still, he said he felt safe at home. Pointing to neighboring apartment
houses in the city-run housing project, he said, “We got these buildings
for jetties.” Hurricane-force winds extended up to 175 miles from the
center of the storm; tropical-storm-force winds spread out 485 miles
from the center. Forecasters said tropical-storm-force winds could
stretch all the way north to Canada and all the way west to the Great
Lakes. Snow was expected in some states. Businesses and schools were
closed; roads, bridges and tunnels were closed; and more than 13,000
airline flights were canceled. Even the Erie Canal was shut down.
Subways were shut down from Boston to Washington, as were Amtrak and the
commuter rail lines. About 1,000 flights were canceled at each of the
three major airports in the New York City area. Philadelphia
International Airport had 1,200 canceled flights, according to
FlightAware, a data provider in Houston. “The most important thing right
now is for people to use common sense,” Gov. Jack Markell said. “We
didn’t want people out on the road going to work and not being able to
get home again.” The storm knocked out power to hundreds of thousands of
homes, stores and office buildings. Consolidated Edison said 68,700
customers had lost power — 21,800 in Westchester County, 18,500 on
Staten Island and 18,200 in Queens. In New Jersey, the Public Service
Electric and Gas Company said the storm had knocked out power to 36,000
customers. In Connecticut, nearly 70,000 people had lost electricity,
utility officials reported. Con Edison, fearing damage to its electrical
equipment, shut down power preemptively in sections of Lower Manhattan —
and then an unplanned failure knocked out power to most of Manhattan
below Midtown, about 250,000 customers. –NY Times