OUT OF MIND » THE INSANITY OF REALITY » GOVERNMENT & THE NEW WORLD ORDER » What the Deep State Fears Most – Dr. Dave Janda

What the Deep State Fears Most – Dr. Dave Janda 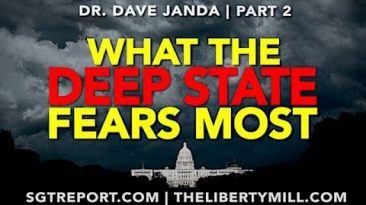 What the Deep State Fears Most – Dr. Dave Janda

Many of us have had it with the nonstop lies and manipulation by the Mainstream Media, as if the endless repetition of these would cause a Pavlovian response that makes them true.
This is a full-blown psychological war that is hurting people and it’s especially perverse that it is being wielded by those who lord Political Correctness over everyone, by those who de-monetize, de-platform and de-bank creators who sincerely do stand for truth and justice.
It’s a symptom of something even bigger. One of my favorite writers, James Howard Kunstler calls the current descent of liberalism into a maw of delusion and bad faith “Wokesterism…the widespread dishonest, despotic, and sadistic behavior syndrome that has roiled college campuses all over the country, and infected every corner of national life, including the giant social media companies, the corporate HR departments, the entire Democratic Party, virtually all show business, and the US Military. Wokesterism employs the same tactics used by Mao Zedong’s Red Guard during China’s ‘cultural revolution’ of the 1960s — an epic fiasco of mass coercion in which millions of innocent people were imprisoned, tortured, and executed to consolidate the ageing and ailing Mao’s power and purge all dissenters. Even the Chinese communist party got sick of it and quashed the hysteria after Mao’s death.”
The most unsettling feature of Wokesterism is how much of what passes for “normal” would have been seen as something out of a parallel universe just 18 months ago. The line between Woke and parody has become very blurred. Half the time Alexandria Ocasio-Cortez tweets, people have to double check to see if it’s really her or if it’s a parody Twitter account.
It’s like the universe is bifurcating before our eyes.
But don’t be fooled by the woke theatrics. It’s all a big distraction from the largest political crime in US history and Dr Dave Janda is back on the SGT Report with the latest juicy, behind-the-scenes details.

OUT OF MIND » THE INSANITY OF REALITY » GOVERNMENT & THE NEW WORLD ORDER » What the Deep State Fears Most – Dr. Dave Janda