The ‘Ministry of Truth’ has been busy trying to hide any links between former US President Bill Clinton and billionaire pedophile Jeffrey Epstein
An eagle-eyed Wikipedia reader spotted the edit, however, and called in the cavalry with a tweet comparing ‘before’ and ‘after’ versions of the article that was reposted to Reddit’s The_Donald community. By Sunday evening, the material had been re-added by user ‘BD2412,’ who slapped a week-long “protection” on the article, preventing drive-by edits by new and unregistered users.
Following Epstein’s arrest Saturday on child sex trafficking charges, it was noticed that his Wikipedia page had been edited to remove all mention of Democrats who have flown on the “Lolita Express”
RT reports: Epstein’s Wikipedia bio came in for some quick whitewashing, with one editor removing multiple references to Bill Clinton flying on the billionaire’s private jet – nicknamed the Lolita Express – on Sunday morning, after the news of Epstein’s arrest broke. The fact that Clinton had flown on the jet 26 times, despite being well-sourced and not in dispute, was “not relevant to [Epstein’s] personal life,” editor ‘Joeblacko’ complained, calling it “a smear toward bill Clinton.” 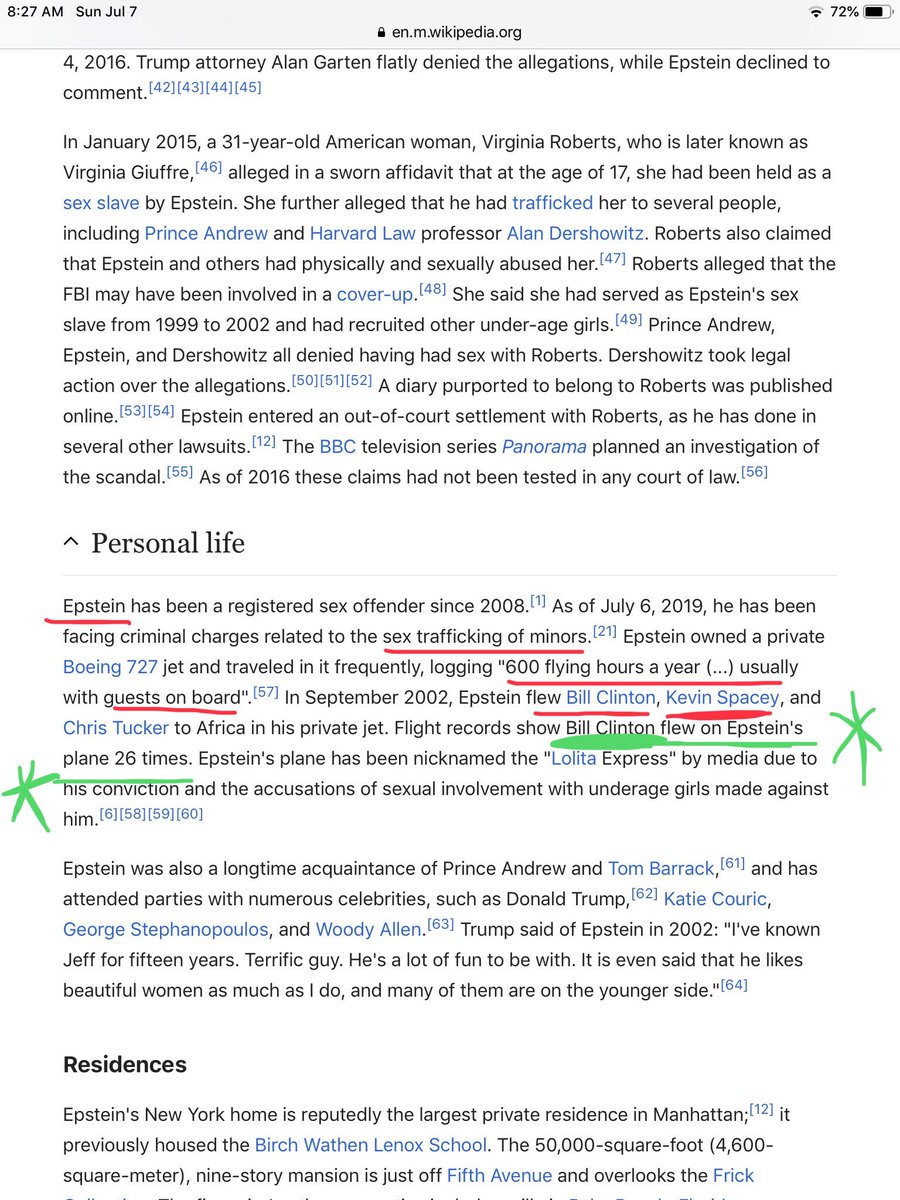 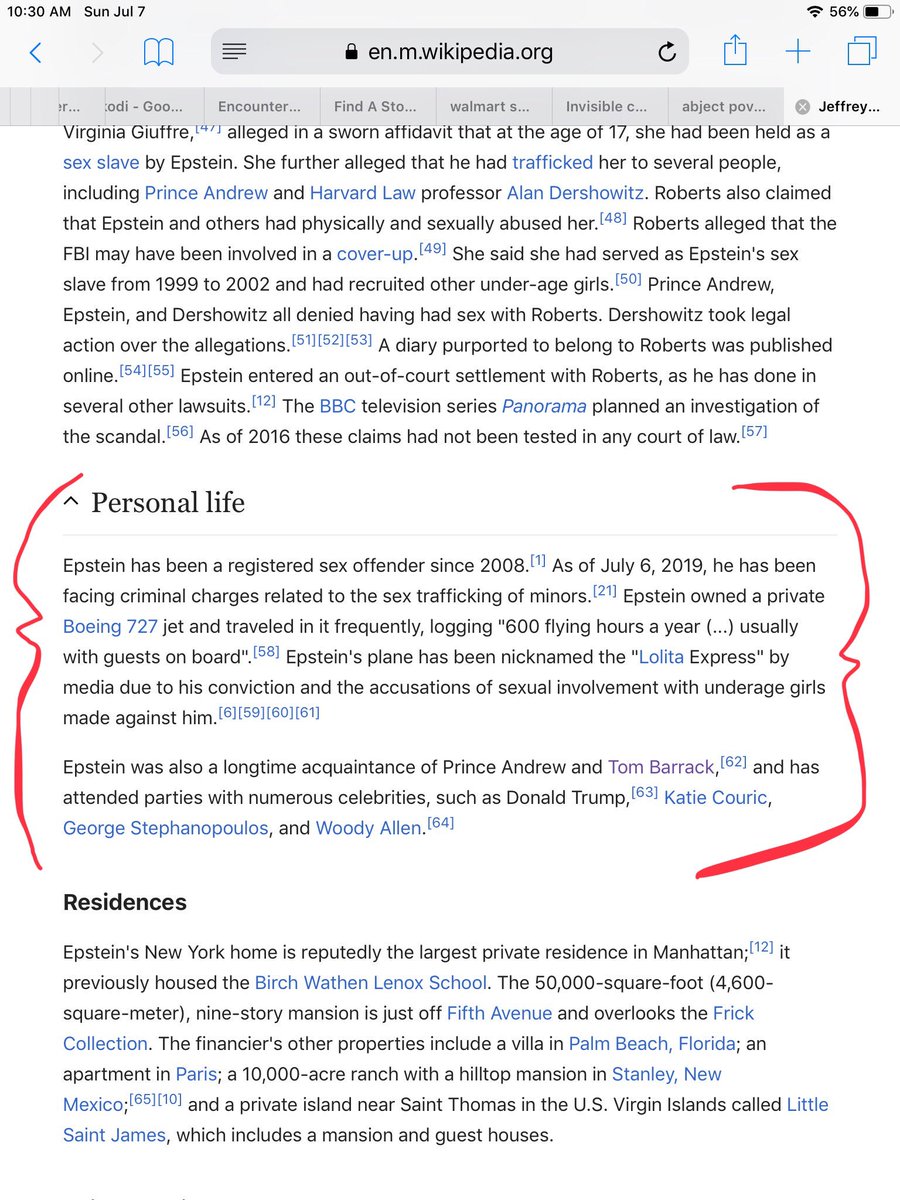 Clinton’s denial of the “26 flights” number was added to the article on Tuesday night by user ‘Soibangla,’ a known quantity in the American politics topic area, who also tweaked a Clinton quote praising Epstein, noting there was “no evidence [Clinton and Epstein] were ‘friends.’”

The Smoking Man / 4 hours ago

– “….Records in the defamation case contained descriptions of sexual abuse by Epstein along with new allegations of sexual abuse by ‘numerous prominent American politicians, powerful business executives, foreign presidents, a well-known prime minister and other world leaders’
Snyder: Epstein Case Has The Potential To Be The Biggest Scandal In American History
We are about to open up a can of worms that could turn our entire country completely upside down by the time it is all said and done. Billionaire Jeffrey Epstein’s horrific crimes have been well known for a very long time, and I have been writing about them for many years. In fact, there were some people that really, really didn’t like it when I wrote about Bill Clinton’s connections to Jeffrey Epstein and “the Lolita Express” during the 2016 presidential election. Flight records show that Bill Clinton took 26 trips on board Jeffrey Epstein’s infamous private plane, and Clinton also spent an enormous amount of time on Epstein’s secluded private “sex island” where underage girls were routinely abused. Of course Jeffrey Epstein had lots of other very famous friends as well, and it has been documented that his “black book” was absolutely filled with marquee names from Hollywood, Wall Street and Washington.
But despite everything that we knew about what was going on, for a very long time it looked like justice would never be served. Epstein got an absolutely ridiculous sweetheart deal from prosecutors in 2008, and none of his famous friends were ever charged with anything. They all probably thought that they had escaped the grasp of law enforcement forever, but this month everything has suddenly changed.
In recent days, authorities apprehended Epstein after his plane returned from an overseas trip, they raided his home, and they formally charged him with sex trafficking and conspiracy…
Fund manager Jeffrey Epstein used his wealth and power to sexually abuse dozens of young girls for years at one of the biggest mansions in Manhattan, paying them hundreds of dollars in cash for each encounter and hundreds more if they brought in more victims, U.S. prosecutors said.
Now, federal prosecutors are charging him with sex trafficking and conspiracy. They’re seeking to send him prison for years and seize that Manhattan home.
The indictment unsealed on Monday against the well-connected financier came days after his arrest upon returning from overseas and just hours after federal agents used a crowbar to enter the townhouse.
The U.S. Attorney’s Office for the Southern District of New York is prosecuting Epstein, and they don’t mess around. They win more than 90 percent of the cases that actually go to trial, and Epstein has good reason to be shaking in his boots at this point.
And it is also extremely interesting to note that James Comey’s daughter is one of the prosecutors on this case…
Maurene Comey, daughter of former FBI Director James Comey, is reportedly a prosecutor in the new criminal case against convicted pedophile Jeffrey Epstein. This details comes out of a new CNN report. The source is described as a person “with knowledge of the case.”
Will that turn out to be significant?
We shall see as this drama plays out.
In the legal community, everyone has an agenda, and the U.S. Attorney’s Office for the Southern District of New York certainly has an agenda in this case.
But what is their goal?
Why have they decided to pursue this specific case at this specific time?
Perhaps the primary goal is to nail Epstein to the wall once and for all. If Epstein is convicted of all the charges against him, he will spend the rest of his life in prison. And if that is all there is to this story, it won’t be an enormous national scandal.
However, it could also be possible that the U.S. Attorney’s Office for the Southern District of New York wants to use Epstein to get to one or more of his famous friends, and that is where things could get very “interesting”.
And the fact that this case “is being overseen by the Public Corruption Unit of the SDNY” would seem to indicate that something is up…

Second, what should we make of reporting that Epstein’s prosecution is being overseen by the Public Corruption Unit of the SDNY? Short answer: It’s too soon to say. It could mean that a public official is being investigated or will be charged with Epstein. That could be a minor public figure or a major one. It could mean that SDNY is investigating misconduct in the plea that Epstein was given in 2008. Or it could mean none of those things.
After everything that Epstein went through in 2008, you would think that he would clean up his life and get rid of all the stuff that got him into so much trouble in the first place.
But when authorities raided his home, they discovered a “vast trove” of photographic evidence…
Prosecutors said a search of Epstein’s Manhattan mansion after his arrest turned up a ”vast trove” of nude photos of what appeared to be underage girls. Officials said in court papers that the pictures included some on CDs with handwritten labels, including “Misc nudes 1,” “Girl pics nude” and the names of specific young women.
It has also previously been reported that in the old days Epstein would actually record “the sordid orgies he threw for VIPs at his luxury homes using cameras hidden in the walls of guest bedrooms”, but it is not known if those recordings still exist or if authorities were able to find any such recordings when they raided Epstein’s home.
In any event, there is clearly an enormous amount of evidence against Epstein already, and that means his only hope of avoiding prison for the rest of his life is to cooperate with authorities.
And as former federal prosecutor Elie Honig has pointed out, Epstein’s former friends from Hollywood, Wall Street and Washington should be quite scared right now…
We do not know if Epstein will cooperate, but even if he does not, others will very likely be implicated. It seems clear from the indictment that others helped Epstein run his alleged sex trafficking operation and otherwise participated in it. At least some of those names will come out in court proceedings, public filings, potentially trial and perhaps additional indictments. And it’s worth noting that the Epstein case is being handled by the SDNY’s Public Corruption Unit — in my experience, human trafficking cases usually are handled elsewhere in the office — which strongly suggests that public officials could be under a microscope here. Anybody who helped Epstein in any way needs to get a lawyer and get scared.
Of course Epstein could choose to sacrifice himself and protect his friends by not talking, but that isn’t likely to happen. In fact, Jack Posobiec is reporting that Epstein’s lawyers have already made it clear to the SDNY that their client will cooperate as long as he can get a reduced sentence…
SCOOP: Epstein’s lawyer has already made a proffer to SDNY. Epstein will agree to cooperate with the investigation, including giving up the names of individuals that paid for activities with underage girls in exchange for a maximum sentence not to exceed 5 years